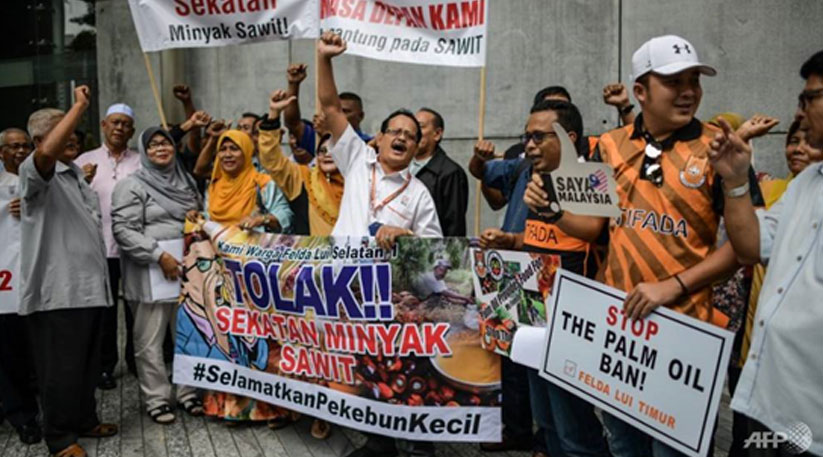 Protesters display placards and banners during a protest against the European Union campaign to ban palm biofuels in Kuala Lumpur on Jan 16, 2018.

KUALA LUMPUR: About 2,000 palm oil farmers protested Tuesday (Jan 16) against a push by the European Parliament to ban the use of the commodity in biofuels, saying it would devastate rural people’s livelihoods.

Waving banners that read “Stop the Palm Oil Ban” and “Palm oil provides food for my family”, the smallholders gathered in downtown Kuala Lumpur and marched to the European Union’s (EU) mission to deliver a petition.

A petition signed by several smallholding groups, the Federal Land Development Authority (Felda), and the Sarawak Land Consolidation and Rehabilitation Authority (Salcra), was handed over to the EU Delegation Office.

Speaking to Bernama, Ahmad Hamidi said 103,078 signatures were collected from Felda settlers in the country in their stride to voice out dissatisfaction over the EU’s move.

“There are about 1,700 of us, who gathered here today, to protest against the ban as this will affect our livelihood as we rely heavily on the commodity as our sole income,” he said.

The demonstration came a day before the European Parliament votes on an amendment to a draft law on renewable energy that calls for the use of palm oil in biofuels to be banned from 2021, amid mounting worries about its impact on the environment.

The vote is significant as it sets out the parliament’s position for talks with EU governments about the form the renewable energy law will take.

Palm oil, also a major ingredient in products from food to cosmetics, has long been controversial as environmentalists say it drives deforestation, with huge swathes of rainforest logged in recent decades to make way for plantations.

Major multinational companies run plantations but the protesters in Malaysia, the world’s second-biggest producer of the commodity, said a ban would devastate rural communities where many small-scale farmers survive by cultivating the crop.

A ban would threaten the livelihoods of 650,000 smallholders and over 3.2 million Malaysians who rely on the palm oil industry, according to industry group the Malaysian Palm Oil Council.

“The policies that the EU is proposing to introduce will harm Malaysia’s rural communities and reduce incomes for Malaysian families,” said Douglas Uggah Embas, deputy chief minister of Sarawak state on Borneo island, home to many smallholders.

Among the protestors was Ambrose Anbu, the head of a remote longhouse in the Sarawak hinterland. Donning the native Pua Kumbu bolero, he and other longhouse chiefs chanted against the EU for discriminating against Malaysian palm oil exports and putting their livelihood at risk.

“There were no roads and no electricity in the village before the oil palm plantations. The fruit has improved our lives. We now have roads and income, and our children can go to school,” they said.

Protesters display placards during a protest against the European Union campaign to ban palm biofuels in Kuala Lumpur on Jan 16, 2018.

When asked about the EU’s deforestation concerns, Ambrose said he simply could not comprehend the fuss.

Meanwhile, Felda –  one of the world’s largest plantation landowners – argued that Malaysian palm oil was being discriminated against as compared to oils such as soya bean, flaxseed and sunflower that are produced in Europe.

It was an unfair trade practice, they claimed, warning that Malaysia could retaliate by banning all EU imports if the ban was to go ahead.

A European ban on palm oil in biofuels would be a huge financial blow to Malaysia and other producers.

The use of the commodity in other sectors, such as food and cosmetics, has already dropped in Europe, partly due to pressure from green groups on major corporations, but has been increasing in biofuels.

Malaysia economist Yeah Kim Leng said that the government can argue for exclusion from the EU ban because most oil palm plantations in Malaysia are converted from land used for other crops such as rubber.

He said the country should not be lumped together with others that massively clear forests for plantation when in Sabah and Sarawak, 50 per cent of forests have been gazetted as reserve forests.