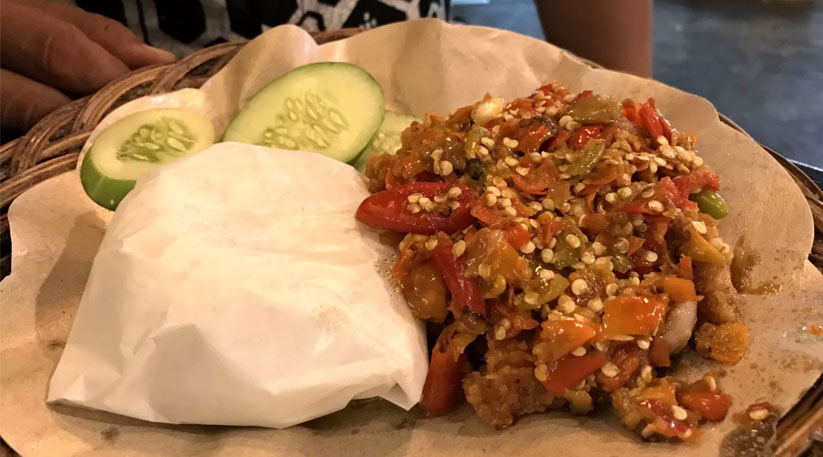 JAKARTA — A cheap, super-spicy dish of pounded fried chicken with chili sauce called ayam geprek has become all the rage in Indonesia. Restaurants that specialize in it have sprung up over the past year, shaking up the fast-food industry and challenging the dominance of Kentucky Fried Chicken.

One such restaurant is Geprek Bensu. An outlet located in a residential area of eastern Jakarta is filled with students and business people at lunchtime on weekdays. The most popular menu item is a set meal consisting of fried chicken topped with chili sauce, rice and sliced cucumber. A cheese topping is also available and the rice can be replaced with fried noodles. There are 10 levels of spiciness to choose from, and all this costs just 16,500 rupiah ($1.20).

Most Indonesians “will go for almost any dish that has chicken or is spicy,” said Octa, a 23-year-old businesswoman. The country relies on imports for beef, making it quite expensive. Thus fried chicken is the most common item in the country’s 22.67 trillion rupiah ($1.65 billion) fast-food market. Hamburger chains like McDonald’s, Burger King and Lotteria compete with one another by offering a wide selection of fried chicken items.

Consumer spending, including eating out at restaurants, has been picking up slowly in Indonesia after years of declines in the prices of commodities, the economic mainstay. The future of the fast-food industry may depend on how creative restaurants can be in offering low-priced chicken dishes in an appealing way.

As part of this, restaurants are competing to create a buzz on the internet. A South Korean-style restaurant named Ojju, for instance, did so by having its staff put on a dynamic performance of wrapping cheese around drumsticks on an iron plate. KFC had a limited-time offer of fried chicken coated with a spicy chocolate sauce.

But at Geprek Bensu it is ayam geprek that people are talking about. The hottest offering — level 10 — is completely covered with sauce. There are no chopsticks or cutlery on the table. Customers are supposed to break the chicken with their hands and eat it with rice. One bite is enough to make your mouth burn and cause you to reach for a glass of water.

This is just fine with locals. When a man arrived on a recent day to find all of the tables inside the air-conditioned restaurant taken, he happily sat at table in the hot weather outside and enjoyed his meal without breaking a sweat.

Ayam geprek became a huge hit in 2017 thanks to a TV personality named Ruben Onsu who set up Geprek Bensu, which specializes in the dish. The restaurant now has over 60 outlets across the country, according to local media, and is starting to compete with KFC, the largest fast-food chain in Indonesia, which runs about 600 outlets. Since ayam geprek is relatively easy to make, small, family-run restaurants have been popping up as well.

The popular photo-sharing app Instagram has also helped the spread of ayam geprek. The unusual-looking dish is eminently instagrammable.

The name ayam geprek literally means “smashed chicken,” and comes from how the dish is prepared. A mixture of red pepper, onion, tomato, salt and other spices is put into a quern, or grinding stone, to make a sauce called sambal. Chicken is added and the ingredients are mashed together.

Most fast-food restaurants in Indonesia serve fried chicken with a sweet chili sauce. Ayam geprek differentiates itself by focusing on the traditional spicy sauce. An 18-year-old student at Geprek Bensu described the hotness as “irresistible.” A 34-year-old businessman said the sambal had an “original” quality.