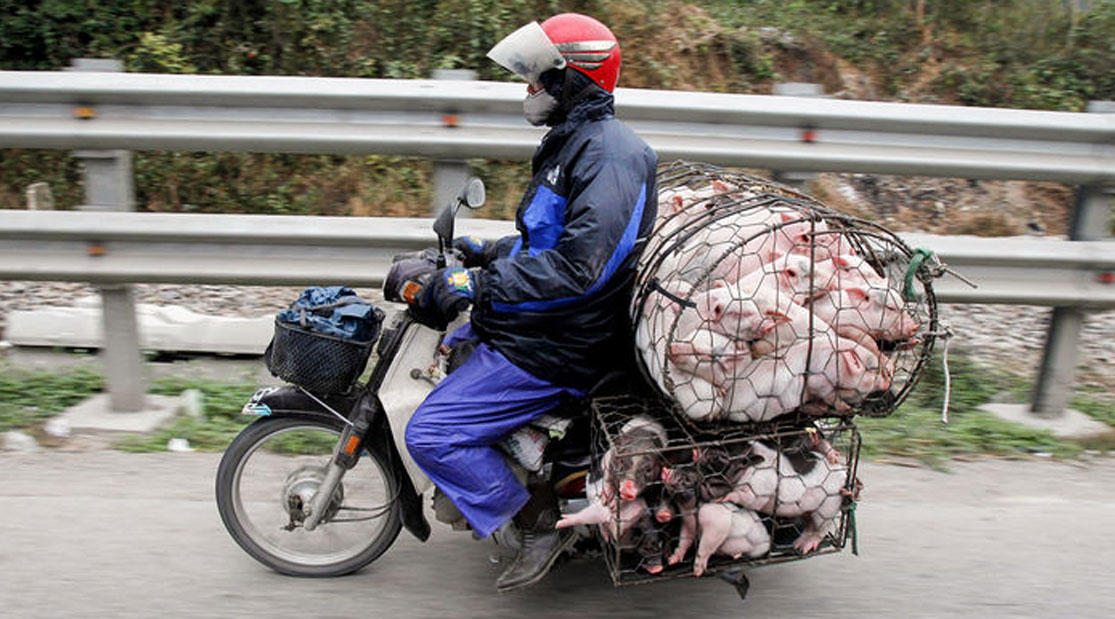 SHANGHAI, CHINA—The spread of African swine fever (ASF) in Asia is taking a worrisome turn. First reported in northeastern China in August 2018, the highly contagious, often fatal pig disease quickly swept through the country, causing the death or culling of more than 1 million pigs. In recent weeks, it has jumped borders to Vietnam, Cambodia, Mongolia, Hong Kong, and possibly North Korea. Animal health experts agree that the disease will inevitably spread farther. And many of the newly hit countries are even less prepared to deal with ASF than China, they say, which has so far failed to end its outbreaks.

Vietnam and Cambodia “probably do not have the technical abilities to be able to control ASF,” says François Roger, an animal epidemiologist at the French Agricultural Research Center for International Development in Montpellier. He believes the virus will soon surface in Myanmar and Laos, which have “weak veterinary infrastructures and surveillance systems,” and it may become endemic in Southeast Asia. If so, it would pose a continuing threat of reintroduction into China, even if that country succeeds in controlling its own outbreaks. A reservoir of endemic disease could also pose a wider threat: ASF-contaminated pork products have already been confiscated from air travelers in South Korea, Japan, Taiwan, and Australia.

The crisis is not only causing economic hardship, but also threatens food security in the region. In Vietnam, where pork accounts for three-quarters of the meat consumption, more than 1.2 million pigs across the country—4% of the national herd—have now died or been killed, the Vietnamese government announced on 13 May. “This is probably the most serious animal health disease [the world has] had for a long time, if not ever,” says Dirk Pfeiffer, a veterinary epidemiologist at City University of Hong Kong.

ASF is harmless for humans but spreads rapidly among domestic pigs and wild boars through direct contact or exposure to contaminated feed and water. Farm workers can unwittingly carry the virus on shoes, clothing, vehicles, and machinery. It can survive in fresh and processed pork products; it is even resistant to some disinfectants.

Endemic in most of Africa, the ASF virus jumped to the nation of Georgia in 2007 and has since spread through Russia. It probably entered China in imported pork products last summer. Infected animals suffer high fever, internal bleeding, and, most often, death, and there is no treatment. “There are promising vaccines under development,” says Yolanda Revilla of the Severo Ochoa Center for Molecular Biology in Madrid, who co-authored a recent review on ASF vaccines—but they’re still at least 3 or 4 years away from the market. Until then, reducing transmission is the only option.

But keeping the virus at bay is fiendishly difficult given how small holders in Asia raise their pigs. Swill feeding—giving pigs kitchen and table waste in which the virus can persist—is “a common practice, but very high risk,” says Juan Lubroth, chief veterinarian at the Food and Agriculture Organization of the United Nations’s (FAO’s) headquarters in Rome. Studies of 68 outbreaks in China concluded that 34% were caused by swill feeding, 46% by contaminated vehicles and workers, and 19% by the transport of live pigs and products.

The Chinese government has banned the use of nonheated swill and doesn’t allow swill feeding at all in provinces with ongoing outbreaks. But convincing farmers to drop this and other risky practices is a challenge, Lubroth says.

To stem outbreaks, China also culls all pigs in a 3-kilometer zone around an infected herd, sets up inspection and disinfection stations to control farm traffic within a 10-kilometer buffer zone, and closes live pig markets in the affected region. But how well such measures are protecting the country’s more than 400 million domestic pigs is unclear. The monthly number of new outbreaks reported to the Paris-based World Organisation for Animal Health peaked in October 2018 at 34, dropped to just four in January, but has gradually climbed since then, hitting 10 in April.

Many observers believe other outbreaks go unreported. “Given the limited effectiveness of control tools, it just cannot be that they have been able to contain the disease,” Pfeiffer says. Chinese media have reported cases of dead pigs dumped in rivers and ditches. And some provinces may be ignoring outbreaks because provincial governments are partly responsible for compensating farmers for culled pigs. To be convinced China is making progress, “We would need to see detailed surveillance data, and detailed reports on each of the ‘resolved’ outbreaks,” Pfeiffer says. Rather than deliberately misinforming international animal health organizations, Pfeiffer suspects China’s veterinary infrastructure is simply overwhelmed.

Even if it’s unsuccessful, China’s response might be hard for neighboring countries to match. The Vietnamese government recently acknowledged that many of the 29 affected provinces didn’t respond adequately because of a lack of funds and space to bury dead pigs, according to a Reuters report this week. “The world and Vietnam have never faced such an extremely dangerous, difficult, complicated and expensive [animal] epidemic as this,” agriculture minister Nguyen Xuan Cuong said in a 13 May statement. The government said it would enlist the military to help control the outbreak. In Cambodia, too, “There is limited knowledge and experience on preventing, detecting, and responding to outbreaks,” says Alexandre Huynh, FAO’s representative in Cambodia. “Human, financial, and material resources” are lacking as well, he adds.

Ultimately, containing ASF will probably require a long and challenging restructuring of the hog industry so that only operators large enough to invest in biosecurity remain, Pfeiffer says. Lubroth adds that such a restructuring helped Spain and Portugal eradicate ASF after it became established there in the early 1960s—but the process took 35 years. The transition might be faster in China, with its resources and a powerful central government. But it could take many decades for its Asian neighbors to build a safer pig industry.