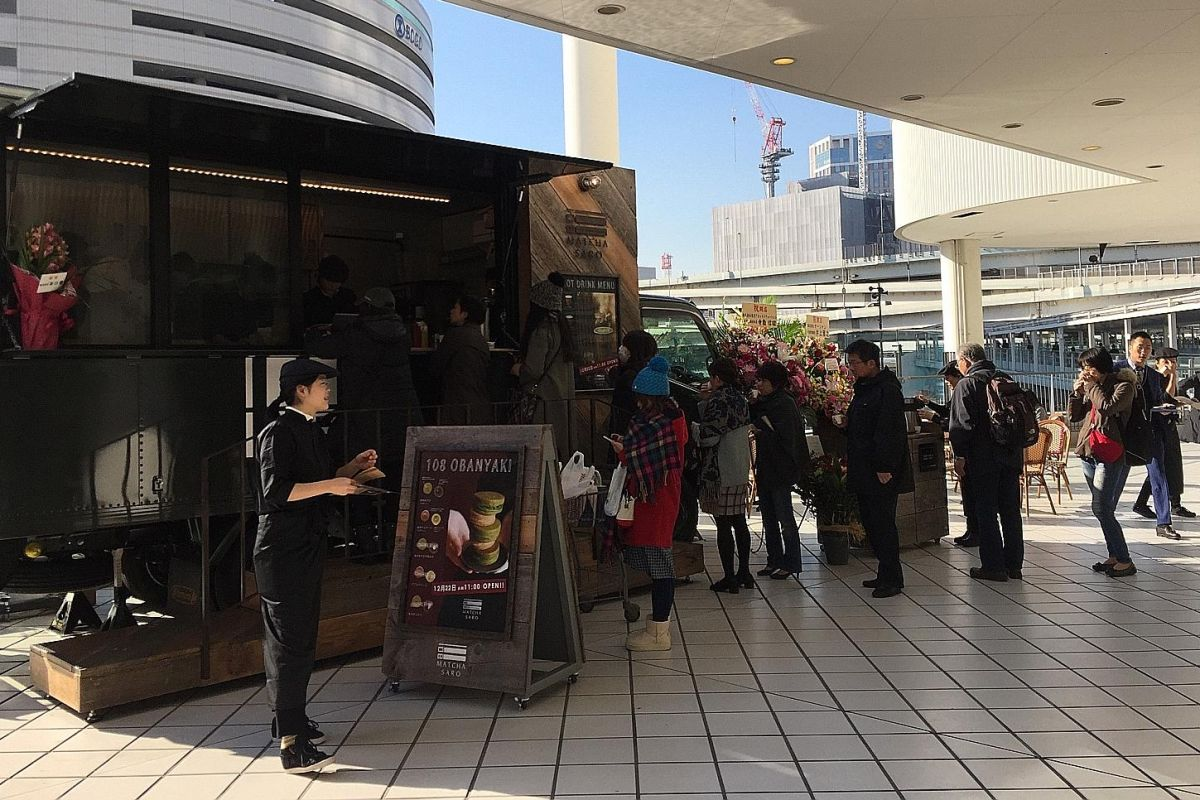 Workers from nearby offices in a Tokyo office hub queueing up for sandwiches at a mobile cafe. Food trucks offering hot meals have become a common sight at carparks or open spaces around office buildings in the city. PHOTO: THE STRAIT TIMES ASIA

TOKYO Finding a tasty, quick and cheap lunch that isn’t from a beef bowl or soba chain in Tokyo’s central business district can be a challenge. And while the packed lunches at convenience stores are getting tastier, they’re often cold and limited in variety.

In fact, the situation is so severe in some office districts that the workers there are labelled as “lunch refugees” – as they have nowhere to go to state their hunger.

Rolling in to the rescue is Tokyo’s growing fleet of “kitchen cars”, more often referred to as the food trucks.

To cater to the hungry and increasingly picky office crowd, the menu is often exotic – from Egyptian breads, Mexican fajitas, Thai and Indian curries and kebabs to hamburgers, pastas, pizzas, stews and grilled meats. Regional specialties ranging from rice bowls to fried noodles to gyoza are also popular options.

Priced from around 400 yen (S$5) to 850 yen, food truck takeaway lunches fill the stomach for less than the standard 1,000 yen pricing for lunch at a sit-down restaurant. “It’s cheap, delicious and satisfying, and different trucks come every day, so there’s always something new to try,” said Mr Tsuyoshi Yamada, an investment manager.

Handiness to the workplace is also why food trucks are a welcome sight. “It’s right outside the office so it’s a convenient and fast option,” said Ms Reiko Noda, an IT sales manager.

And as people get married later and divorced earlier or are simply too busy to cook, the tradition of bringing a packed lunch, or bento, to work is becoming less common. “With more double-income families, wives often don’t have the time to prepare a lunch bento for their working husbands, like in my case,” said Mr Kenji Iwamoto, an IT engineer in his 30s.

HOPPING ON THE FOOD WAGON

In recent years, more people are keen to run their own food trucks, either as a weekend side business or to break free from the salaried life to become their own bosses.

Mr Takehiko Shibuya, a car dealer who switched to selling food trucks around 10 years ago, said the boom took off around last year. “Orders for food trucks totalled around 33 million yen in 2012, but that increased more than 10 times to reach 383 million yen last year,” he said.

From a base of 2 million yen, the start-up cost of running a food truck is around one-fifth that of setting up a traditional diner. Popular food trucks can easily rake in over 100,000 yen in sales – over S$1,200 – per lunch service a day.

Seminars on how to run food trucks are always fully booked, according to Mr Asaba. Since last year, he has held 24 sessions, attended by over 700 people in all. “I wanted to share my experience – from getting the required permits to recipe development, procurement of ingredients, finding a venue, getting a food truck, financial management, etc,” he said.

The permits to run a food truck are the same as for a regular eatery – a food sanitation licence and a public health centre permit. As a rule, vendors are limited to heating up food that has already been prepared.

The final product must be served hot, which means that fresh, raw vegetables are a no-go, even in a sandwich. Strictly speaking, even raw fruit used in toppings is not permitted for hygiene reasons.

Securing a suitable parking space is an important step in running a food truck. “Parking regulations for a food truck are the same as for any other vehicle, as long as it’s within the height restrictions,” explained Mr Asaba. Fortunately, building owners welcome the presence of food trucks as offering a value-added service to tenants, making it possible to rent a space from them.

Once these hurdles are overcome, food truck owners have the freedom of operating in any of the permitted zones, or during festivals and events. “The run-up to the 2020 Olympics also spells another opportunity for entrepreneurs, with more visitors and more offices also being built,” said Mr Asaba.

WHERE THERE’S A WHEEL

In Japan, food trucks can be based on any vehicle, but the most popular base is the “kei” truck, or light truck with a 660cc engine. The compact size means less parking space is needed, running costs are kept low and road taxes are less.

And as these food trucks are custom-made and not mass-produced, demand is outstripping supply. Used delivery vans are also in high demand for refurbishing into food trucks as a cheaper and quicker option to get the business on the road.

The profile of private food truck owners varies from wannabe entrepreneurs to those retrenched from their jobs with a golden handshake or housewives wanting to pursue their culinary passion, notes Mr Asaba.

“Quite often they don’t have a background in the F&B business, but as the menu is limited, they find it manageable,” he added.

One more unusual example of a food truck entrepreneur is Mr Kuniki Ishikawa, in his early 60s. His day job is as a Shinto priest in Kanagawa Prefecture, next to Tokyo. He had always dreamed of running a food truck of his own, after enjoying hotdogs from a beachside food truck in his younger days. But he had to take over the responsibility of running the shrine from his father.

Now near retirement, he has finally taken the step to buy his own food truck. He parks it in his shrine and sells udon noodles over the weekends.

In Japan, the humble food truck is serving to answer the prayers not only of the city lunch crowd, but also of people with a hunger to pursue their dreams.