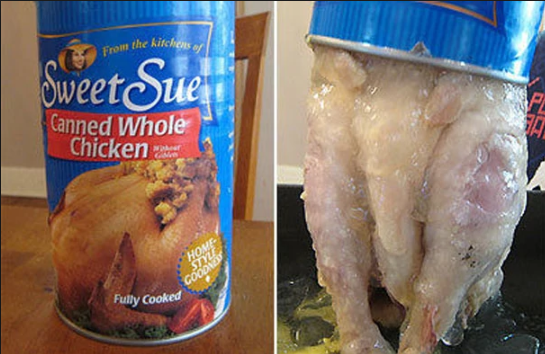 Imagine building and prepping an underground bunker for your family, just in case chemically-radiated zombies would attack. What kind of food would you store? Should anything like that ever happens, here is a list of canned foods the Food Experts at Ricebowl Asia would recommend to be stored in your bunker.

Canned bread really exists. It’s even available in several different varieties. While it’s likely more practical to store ingredients to make your own bread for the long-term, canned bread could be a tasty, quick way to a full belly and to get some carbohydrates into your system.

When you have no access to any diner or fast food joints, a burger in a can would brighten up the gloomy days in your bunker. Designed to be eaten out in the wild, you can enjoy it as-is or heated up. Ricebowl Food Experts’ note: Looks may be deceiving.

Fancy for a picnic? Canned potato salad would be a good way to add a little flavor into your bunker-meals, and it can be eaten warm or chilled, making it a more versatile side dish than you’d possibly realized.

Take an imaginary trip down to Korea where Silkworm pupae, known as beondegi are a pretty popular snack-time treat. Though the little critters are first cooked by street vendors or in restaurants; no one should can this. But in all fairness, bugs are protein rich and are                 considered the food on the future.

You can enjoy this unique French delicacy from a can. If uncurling these little amphibian legs out of the can ‘yuck’ you out, do remember that that’s just part of the experience.

They say breakfast is the most important meal of the day. Well, this breakfast in a can certainly looks mighty filling! It contains all the essential ingredients of an English fry-up: eggs, sausage, mushrooms, tomato sauce and baked beans. And, yes, they’re all mixed up together inside the can.

Making your own cheese isn’t hard but there is a lot of work involved, and the raw materials needed may not be easy to come by. Lucky you there’s canned cheese. While it’s not quite like what we think of as ‘real’ cheese, canned cheese has plenty of fat and flavor to be a worthwhile addition to your bunker’s pantry.

Longing for brains but don’t have the time to slaughter a boar and dig them out yourself? Lucky you there’s canned pork brains. Served in milk gravy these canned pork brains make an excellent addition to any meal (if you are a fan of animal brains). There’s even a recipe at the back of the can!

Woke up in your bunker feeling a bit ‘Japane-sy’? Reach out for that Sushi…in a can! Take a pick from your favorite Inari Sushi variations. Say Sayonara to the Japanese cravings!

Again, looks may be deceiving. But canned whole chickens are good for more than just the meat. When the entire chicken is canned, all the gelatin and fat is preserved, allowing you to make a fantastic chicken soup that will go along with your canned bread.