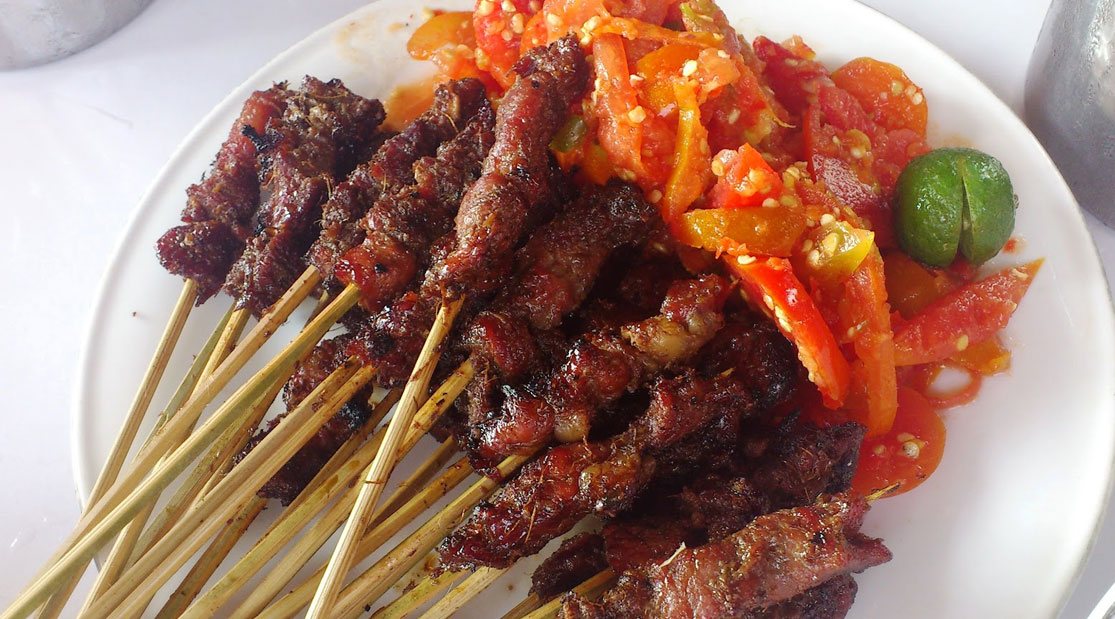 Satay, juicy chunks of marinated meat skewered on thin bamboo sticks and grilled to perfection on a charcoal open fire, served with a delectably savoury sauce. It may have been claimed that Satay originated from Malaysia, but historically, it can be traced back to Java as the place where the Indian kebab, imported by Muslim traders, first took on a distinctly more eastern flavour.

Indonesia can indeed claim Satay as theirs, given the fact that they have many variations of Satay as oppose to Malaysia, which has only 1 main type of marination country-wide. Indonesia however, has many different types of Satay, coming from different parts of the republic.

The Food Experts at Ricebowl Asia hereby decree that Satay is from Indonesia. With that being said, here is a list of Satay and its variants that you can find in Indonesia.

This is the most common Satay sold in Indonesia. You can find it everywhere—from street peddlers to the up-class restaurants in 5-star hotels. It is chunks of chicken meat (usually combined with chicken liver and skin) skewers that is marinated in soy sauce spice and then grilled. It is usually served with sweet and spicy peanut sauce, sliced shallots, and chopped chilies along with steamed rice or lontong (rice cake).

Sate Maranggi is a popular Satay from Purwakarta, West Java. Usually Satay Maranggi is made from lamb meat or beef. The marinating sauce is usually made from the mixture of green chili paste and cuka lahang (vinegar made from sugar cane) so it tastes a little bit spicy.

Sate Kalong literally means ‘Bat Satay’. But don’t worry, this Satay isn’t made from bat meat at all. Sate Kalong is made from ox meat and marinated in sweet spice. It taste sweet and a bit like dendeng sapi (Indonesian jerked meat). It was named Sate Kalong because usually the peddler sells this Satay from the evening until midnight (‘Kalong’ in Indonesian also means begadang or staying up late).

This Satay is not like other grilled Satay mentioned above. This specialty food from Surabaya, East Java is cooked by boiling the scallops and sauté them in hot and sweet spice. Usually Sate Kerang is eaten along with lontong balap (famous rice cake dish from Surabaya).

This Satay is also not grilled, but sautéed in spices and then skewered using bamboo skewers. Just like its name, it is made from usus (chicken’s intestines). Sate Usus also comes boiled, and then it is fried before serving.

Sate Buntel is famous in Solo or Surakarta, Central Java. It is made from minced beef or lamb (especially the belly or ribs area). The fatty meat then wrapped in a meat’s membrane before being wrapped around bamboo skewers. It is then grilled on fire charcoal, and removed from the skewers before serving. The sauce is made from the mixture of sweet soy sauce and ground pepper.

This is one of the most unique kinds of Satay from Indonesia. Sate Torpedo is made from the goat testicles goat, hence the name. Many people, usually males, love consuming this Satay as it is said to improve energy and sexual stamina.

It is dubbed as a unique Satay from Banten. Sate Bandeng is made from boneless bandeng (milkfish). The milkfish meat is minced and mixed with spices, and then inserted into the milkfish’s skin. It does not use skewers but a tongs made from bamboo, and grilled on fire charcoal.