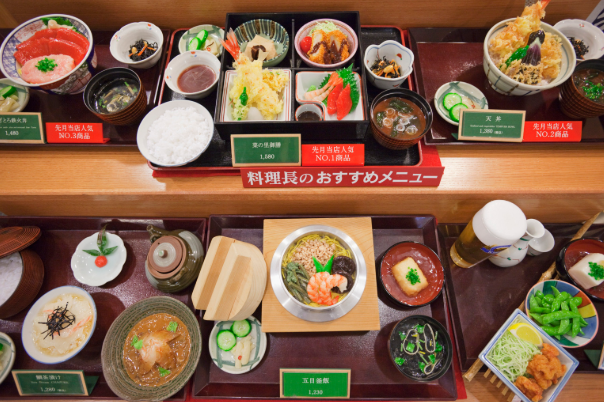 Gujo Hachiman, a Japanese town known as the centre of the replica food industry is worth an estimated $90m

With a gentle swish through hot water, and some deft tearing and shaping, Kurumi Kono turns a rectangular sheet of white and green wax into what, improbably, is quickly coming to resemble an iceberg lettuce.

Kono makes it look deceptively easy. “Place it in your hands and pull out the edges like this,” she says. “Then roll the remaining wax into a ball to make a small lettuce. Place it onto your hand and, starting from the back, fold the bigger leaf towards the middle. Using both hands, gently form a sphere. And there you have it.”

She then drips a yellowy liquid wax from a paper cup into the hot water. Within seconds, it forms a solid coating, in which she encases a “cooked prawn” to produce a flawless piece of tempura. It really does look good enough to eat.

A godsend to foreign tourists who, faced with a Japanese-language menu, can simply point and order, shokuhin sanpuru (food samples) have been tempting diners into Japan’s restaurants for almost a century.

Gujo Hachiman, a picturesque town tucked in the mountains more than three hours west of Tokyo, lays claim to being the home of a replica food industry now worth an estimated $90m.

It is said that the father of replica food, Takizo Iwasaki, was inspired by the drops of candle wax that formed on the tatami-mat floor at the home he shared with his wife, Suzu, in Osaka, according to his biography, Flowers of Wax.

After months of perfecting his technique, Iwasaki made Suzu a fake omelette, garnished with tomato sauce, that she initially failed to distinguish from the real thing.

While some artisans had already started making rudimentary food models in the 1920s, Iwasaki pioneered a production method that combined accuracy with volume, and opened a workshop in his hometown of Gujo Hachiman.

His omelette appeared at a department store in Osaka in 1932, and an industry was born.

The more prosaic theory is that the replica food boom grew out of demand by restaurants for models that re-created the increasingly eclectic range of Japanese and foreign dishes that appeared on menus in the postwar period.

“Eating out could be a challenge for some people in those days, so restaurateurs saw display models as a way of putting customers at ease,” says Katsuji Kaneyama, president of Sanpuru Kobo (Sample Kobo), one of several replica food firms in Gujo Hachiman, whose products account for about two-thirds of the domestic market.

A balance between realism and aestheticism

“The trick is in striking a balance between realism and aestheticism – the model that looks the most delicious isn’t necessarily the most realistic,” says Kaneyama, whose 10 full-time artists produce as many as 130,000 samples a year, made from durable PVC rather than wax. “And the most realistic models might not look all that tasty.”

In the shop attached to the Sample Kobo workshop, lines of tourists fill baskets with key rings, fridge magnets, USB flash drives, pencil sharpeners and other souvenirs, and try their hand at making fake tempura and lettuces.

The replicas don’t come cheap, however. Some of the more intricate models can cost several hundred dollars, and all items cost more than the dishes they represent.

The artists at Sample Kobo, like at other replica firms, make every item by hand, painting and airbrushing each morsel until they’re practically indistinguishable from the real thing.

Kaneyama, though, dismisses concern that the industry will be overtaken by 3D printing technology. “3D printers make a decent product, but it actually takes longer and costs more than you’d think.”

But his main objection is aesthetic. “I can easily tell the difference between a printed model and one that has been painstakingly created by hand,” he said. “There is something about the way a handmade replica looks and feels that I don’t think can be re-created on a 3D printer.”

In the workshop, artists paint seeds on to slices of banana and glue slices of tuna belly to oblongs of rice. On the workbench in front of them is a whimsical ramen presentation, the chopsticks and a mouthful of noodles seemingly suspended in mid-air above the bowl. Shelves heave with an eclectic mix of western and Japanese food, from ayu river fish that appear to have just been pulled from the water to glasses of lager and spider crabs.

Kaneyama believes his artists can reproduce the most obscure items of food demanded by tens of thousands of restaurants across Japan.

And the most difficult to get right? He smiles and answers: “Sushi.”