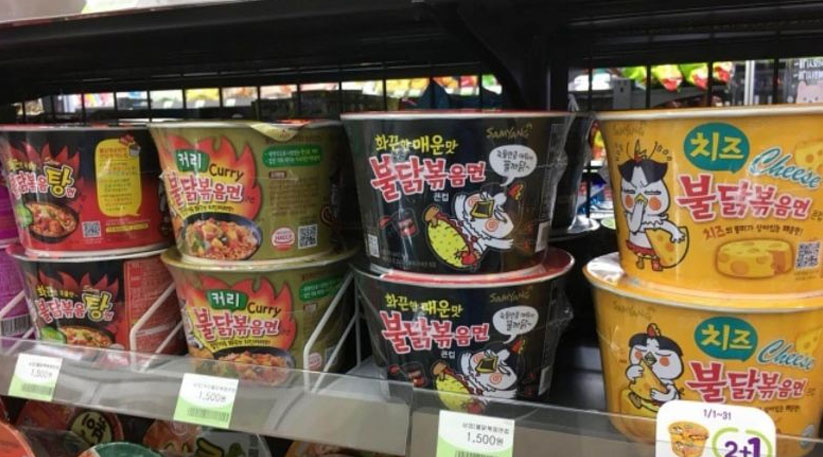 SEOUL (THE KOREA HERALD/ASIA NEWS NETWORK) – When Samyang Foods released Buldak Spicy Chicken Ramen in 2012, the company did not expect it would receive such explosive popularity from customers abroad – especially in the YouTube community.

Buldak refers to grilled chicken marinated in super-spicy red chilli paste. Its name translates to “fire chicken”. It remains unknown where the meat dish originated, but it became popular among South Koreans in the early 2000s.

In 2014, a British YouTuber called “Korean Englishman” uploaded a video in which he filmed reactions of foreigners trying the Buldak ramen. Most of those brave souls could not bear the spiciness of the noodles.

The video soon went viral and since then, numerous YouTubers have taken on the challenge of eating it, dubbing it the “fire noodles challenge”.

“And it was in 2016 that Buldak ramen fever hit the South-east Asian market. It was when our skyrocketing sales graph hit its peak,” said manager Park.

In 2017, Haek Buldak Extra Spicy Chicken Ramen, which measures 8,000 Scoville Heat Units, hit the local market. It doubles the spiciness of the original one.

“Spicy food relieves stress, and unlike other restaurant-quality food, Buldak Ramen is a much cheaper, more easily accessible alternative to extreme spice for stress relief,” said Korean-American Joon Yang, who lives in Seoul and enjoys different versions of Buldak Ramen.

According to Samyang Foods, at least 400 million packs of Buldak ramen were sold in 2017 alone.

The company said it is operating its production line literally around the clock.

Samyang Foods is currently the industry’s top three in sales with an 11.3 per cent share of the local instant noodles market as of 2017, fast catching up to the No. 2 spot taken by Ottogi with 22.4 per cent. Nongshim leads the market with 55.8 per cent of market share.

However, the plan to invest in its plant and equipment is raising concerns, as other companies have made similar moves for their products, only to see demand fall later. For instance, confectionery firm Haitai’s Honey Butter Chip saw explosive sales in 2014, but this died down soon after.

“Many worry that our products may become forgotten and sales would dwindle in a couple of years. But what we have observed was that since the second half of 2016, sales have been maintaining an upward turn,” said manager Park.

Once the construction of four additional production lines is complete, annual production capacity will increase to 1.5 billion packs of ramen, up from the current 400 million packs a year, according to the company.

Having successfully expanded its sales portfolio across the globe including the United States, Europe, Australia and South-east Asia, Samyang now plans to make an aggressive foray into the Halal market.

“In September, we were approved by MUI, Indonesia’s top Islamic clerical body, to certify us as a halal product,” manager Park said, adding that Halal-certified Buldak ramen will be available in Indonesia starting this year.

Industry experts estimate the Indonesian instant noodles market is valued at 4.4 trillion won a year, followed by Vietnam with 1.8 trillion won and Thailand with 1.5 trillion won.

China is No. 1 in the industry with a market size of 16 trillion won. Government data released on Tuesday (Jan 23) showed that exports of South Korean-made instant noodles, or “ramyeon”, surpassed the US$300 million mark for the first time ever on the back of strong popularity in China, the United States and Southeast Asian nations.

Shipments of ramyeon reached a record high of US$380 million last year, up a sharp 31.2 per cent from a year earlier, according to the data compiled by the Korea Customs Service, reported Yonhap news agency.