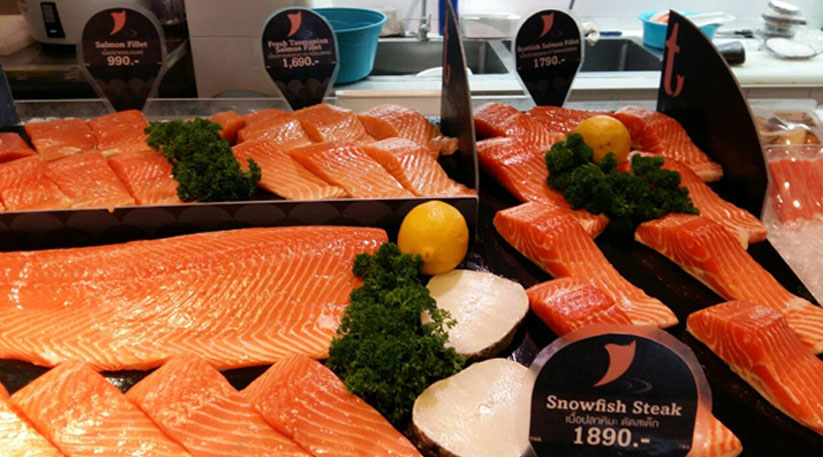 BANGKOK — There is a growing number of food establishment offering “authentic” Japanese sashimi at a 999++ baht buffet all over the city. Most of them feature Norway’s most important export to Thailand – Salmon.

“Thais are buying more and more salmon, and we’re very happy about that,” Rodsmoen said in a private interview with Khaosod.

In 2018 alone, Norway exported 29,000 tons of seafood worth USD135 million to Thailand, or more than 4 billion baht, an increase of about 10 percent from the year before. This amount is about one percent of the total 2.7 million tons exported by Norway in that year.

Seafood trade, largely composed of salmon and mackerel, alone amounts for more than 21 percent of the entire worth of bilateral trade between Norway and Thailand, which was around USD640 million in 2018.

The amount is significant enough that the Norwegian Seafood Council, a public company by Norway’s fisheries ministry, officially relocated its Southeast Asian office from Singapore to Thailand earlier in 2019.

Other than all-you-can-eat buffets of salmon commonly found around the country, Norway’s mark on Thailand is also in the form of third-largest mobile phone provider Dtac, which is owned by Norwegian company Telenor.

On the other hand, Thais are selling machinery, vehicles and oil industry modules to Norway. In fact, Norwegian oil and gas supplier Aibel even has a Eastern Economic Corridor factory in Laem Chabang port in Chonburi producing parts for making oil platforms.

Of course, salmon isn’t the only thing Norway is sending downstream to Thailand.

Thailand is the second most popular tourist destination for Norwegians second only to Spain, with 130,000 to 140,000 Norwegians, both tourists and business travellers, visiting every year.

About Norwegian 5,000 expats reside in Thailand, with the number bumping up to almost 9,000 during the Norwegian winter. Some are retired and live in Pattaya, Hua Hin, and Phuket.

Rodsmoen says the Scandinavian “flygskam,” or flight shame movement which discourages plane travel for environmental reasons, hasn’t put a noticeable dent in any incoming tourist numbers to Thailand but said that eco-conscious Norwegians are “putting more and more pressure” on developing cleaner ways to fly.

Four times as many Thai expats reside in Norway, 20,000, but only 8,500 Thais visited Norway as tourists in 2018. Still, from January to August 2019, there was a 20 percent increase in Thai tourist numbers to the Land of the Midnight Sun.

Rodsmoen, 56, has worked in the Norwegian foreign service since 1988 and been stationed in places like New York, Mexico, and Latin America before taking up her Thai post in 2018.

Norwegians really are that gender-conscious and lovers of the outdoors, Rodsmoen said when asked to confirm or deny a stereotype about the country.

“A good stereotype is that we are really outdoorsy and love nature. I can confirm that Norwegians really love to wander in the mountains and the cold,” she said. “There really is a market for Norwegians to trek in the north of Thailand.”