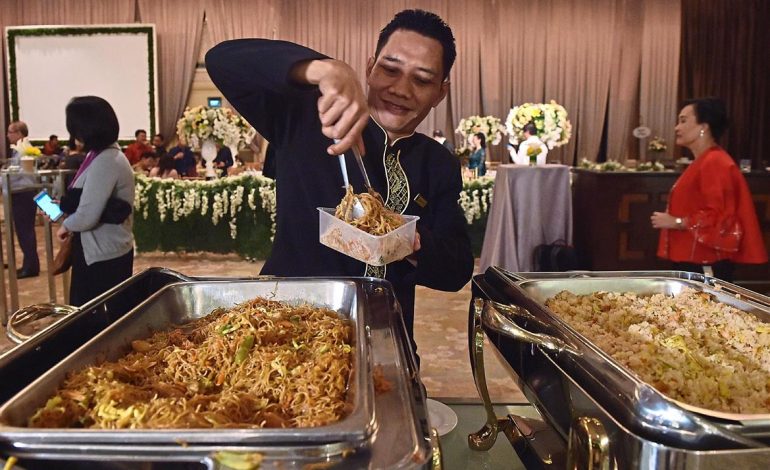 In the slums of Jakarta, Indonesia’s poor are getting a taste of how the other half live thanks to a new program that aims to take a bite out of its huge food-waste problem.

Called Blessing To Share, the service supplies leftover wedding dishes to some of the poorest members of society in the sprawling capital.

Even as it struggles with poverty and malnutrition, the South-East Asian nation bins more edible food per person than any other country except Saudi Arabia, according to an Economist Intelligence Unit survey last year.

Indonesia’s 260 million citizens each throw out an average of almost 300kg of food annually, ahead of the United States in third spot, the survey said.

The country’s food waste problem can be partly chalked up to local hospitality, which calls for ample helpings at all celebrations.

Hosts often err on the side of abundance, and many hungry revelers’ eyes are bigger than their stomachs – meaning lots of uneaten food.

Around the globe, about 30% of food produced every year is tossed, which translates into approximately 1.3 billion tonnes amounting into US$1tril (RM4tril) in economic costs, according to the UN’s Food and Agriculture Association.

That’s where a Blessing To Share comes in. “There are lots of weddings in Indonesia and lots of extra food,” said program founder Astrid Paramita. “And there are lots of hungry people unfortunately, so this program is trying to close that gap between the rich and needy.”

So far the program is fairly limited, but Parmita has big plans and hopes to expand to other cities and also start sourcing edibles from company meetings and conferences.

Since starting in November, about 50 weddings have participated in the program with about 1.45 tonnes of food collected for distribution through a local food bank.

For 60-year-old scavenger Efendi, getting a meal from one couple’s lavish weddings across town was a welcome surprise. “I didn’t expect this. Suddenly I’m getting free food,” he said. — AFP