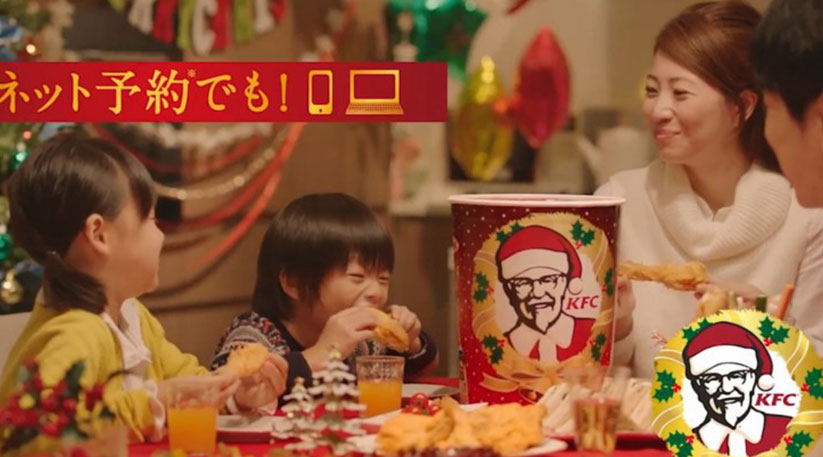 Every year, millions of Japanese families would frequent their local KFC outlets to take part in the annual Kurisumasu ni wa Kentakkii: Kentucky for Christmas. Although Christmas is not a big celebration in Japan, but after the Colonel introduced the idea of a family gathering around a bucket of the original recipe fried chicken, this island of sushi and wasabi found its Christmas spirit. A spirit that is strong enough that this Christmas tradition has been bringing friends and family together every December 25 since the fast food company created the Kentucky Fried Christmas concept in 1974.

Every Christmas season an estimated 3.6 million Japanese families treat themselves to fried chicken from the American fast-food chain, in what has become a nationwide tradition. Come December every year, KFC locations across Japan are decorated in red and green in anticipation of the Christmas rush. For people who are born after 1974, enjoying a bucket of KFC is more than just a holiday activity – it has become an event they have been accustomed to.

Customers have to order in advance to avoid a long wait

Although having a Kentucky Fried Christmas has become a tradition in Japan, waking up in Tokyo and walking down to the closest KFC isn’t an easy feat. The restaurant chain is incredibly busy throughout the bustling holiday season and orders for Christmas Day have to be made at least a month in advance if not earlier in order to have enough food ready for your entire family. But that doesn’t stop people from showing up on the day to stand in line for hours to get some KFC. On Christmas Day the business explodes and locations can sell up to 10 times their usual amount.

An eavesdrop turned into a marketing campaign

According to KFC Japan spokeswoman Motoichi Nakatani, it started thanks to Takeshi Okawara, the manager of the first KFC in the country. Shortly after it opened in 1970, Okawara woke up at midnight and jotted down an idea that came to him in a dream: a “party barrel” to be sold on Christmas. Okawara dreamed up the idea after overhearing a couple of foreigners in his store talk about how they missed having turkey for Christmas, according to Nakatani. Okawara hoped a Christmas dinner of fried chicken could be a fine substitute, and so he began marketing his Party Barrel as a way to celebrate the holiday.

In 1974, KFC took the marketing plan national, calling it Kurisumasu ni wa Kentakkii, or Kentucky for Christmas. It took off quickly and the Party Barrel for Christmas became almost immediately a national phenomenon.

Advertisements for the company’s Christmas meals show happy Japanese families crowding around barrels of fried chicken. But it’s not just breasts and thighs – the meals have morphed into special family meal-sized boxes filled with chicken, cake, and wine. This year, the company is selling Kentucky Christmas dinner packages that range from a box of chicken for 3,780 yen, ($32), up to a “premium” whole-roasted chicken and sides for 5,800 yen. According to KFC, the packages account for about a third of the chain’s yearly sales in Japan.

It also helped that the stores dressed up the company mascot, the smiling white-haired Colonel Sanders, in Santa outfits. In a country that puts high value on its elders, the red satin-suited Sanders soon became a symbol of a holiday. Okawara’s decision to link KFC and Christmas took the fast food chain from America to massive success, as well as resulting in the creation of a new winter tradition which is still cel