Forget Your Boyfriends, Food Delivery Companies are Fighting Each Other to Send You Food 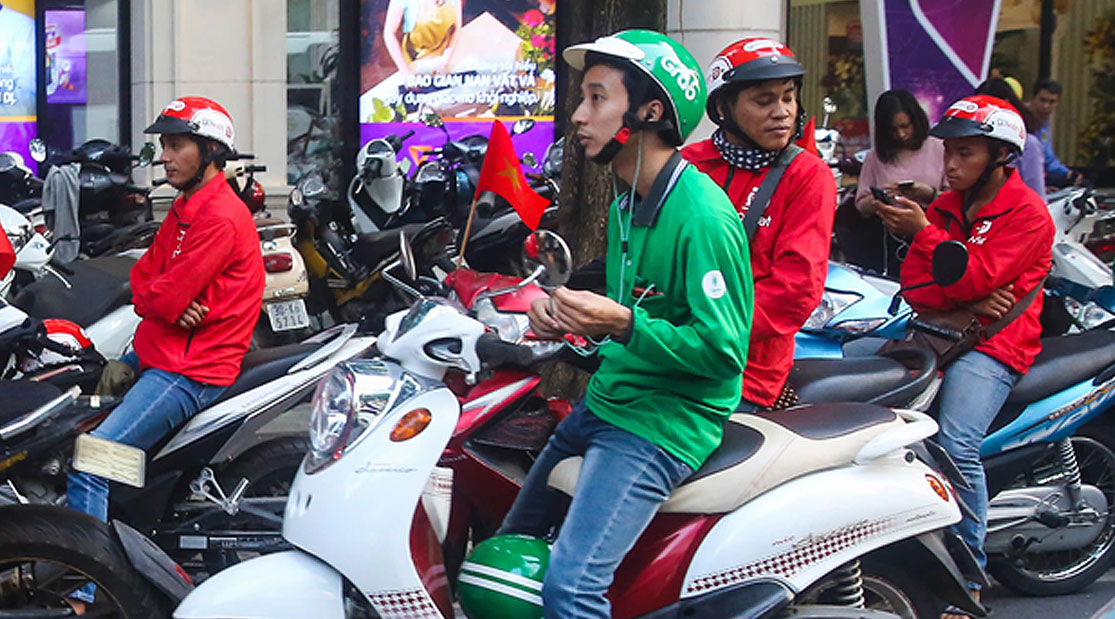 Just recently, a sea of red filled the inside of a milk tea shop in Ho Chi Minh City instead of regular young customers usually found in such places. GoViet drivers were queuing up to purchase food ordered by customers over its online delivery app Go Food, which was running a 50-percent discount program along with free delivery within 5 kilometers.

The very next morning, the shop was filled with green shirts of Grab drivers. Grab had launched a free delivery promotion for the first 999 cups of milk tea ordered.

Gradually, the green shirt – red shirt war is becoming visible on the streets.

Despite being new entrants in the online food delivery market, both Go Viet and Grab are using various measures to attract and capture customer habits. Everyday, these two tech companies spend big on promotions across a wide range of food and drinks.

They are also recruiting stars from the entertainment industry to endorse their service.

From the get go, Go Viet had announced a partnership with singer Son Tung M-TP, who broke the record of Asia’s most viewed music video in 24 hours last May, as the company’s brand ambassador.

While having large financial and technological capabilities, both Grab and Go Viet face many challenges after entering the market later than competitors like Delivery Now by Foody, Vietnammm, and Lala, which are apps well known to many customers.

Delivery Now offers a wider range of food on its menu than Grab and Go Viet, had has a dense network of partners from large restaurants to small pavement stalls, industry insiders say.

Delivery Now is a product of Foody Corporation, a Vietnamese food service startup that was acquired by Singapore-based internet firm Sea LTD last year; Vietnammm.com is a subsidiary of Takeaway.com, one of the world’s largest online food ordering websites based in the Netherlands; and Lala is invested by Ho Chi Minh City-based Scommerce Group, an information technology and services firm.

Many experts believe that the race for market share between Go Viet and Grab will resemble that of Grab and Uber when they first entered Vietnam.

Both Grab and Go Viet are aspiring to become super apps, for which food delivery is an indispensable keystone. In addition to attracting users with incentives and advertising, the two companies are spending a lot of money on reward policies to incentive drivers and expand their network of partner restaurants.

Grab Vietnam CEO Jerry Lim claimed GrabFood’s growth has been very impressive, with the number of its contractors increasing eight-fold in just a month of testing in Hanoi. GrabFood was released in the city early last month, after a period of testing.

In Vietnam, Grab is reaching delivery speeds of under 25 minutes and aims for a further reduction to 20 minutes per order, the fastest in regional markets.

Grab Food is available in both Hanoi and Ho Chi Minh City, while Go Food is only present in the latter.

Go Viet, however, remains confident that it will meet the needs of customers, aiming to partner up with thousands more restaurants nationwide in casual dining, fast food or luxury dining.

However, these delivery apps also have certain limitations. For some items on their menu, drivers have to pay up front when ordering for customers in non-partner restaurants.

Not all drivers are happy to buy food this way as waiting is time consuming, they have to make advance payments and risk the customer not accepting delivery.

Do Xuan Quang, deputy head of Vietnam Logistics Business Association, said Vietnam was the fastest growing e-commerce market in Southeast Asia, and along with the strong growth of the logistics industry at 15-20 percent, a similar movement in the delivery market was not surprising.

In 5-10 years, the delivery market in Vietnam will be valued at around $10 billion, he said.

U.K.-based market research firm EuroMonitor International values the food delivery market in Vietnam at around $33 million this year and at more than $38 million in 2020. It also puts the annual growth rate of the market at 11 percent.