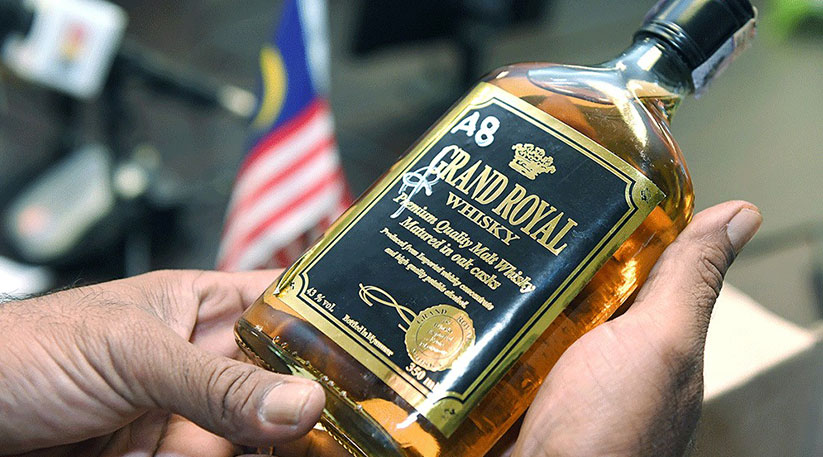 Ingestion of these contraband products have lead to some very serious liver and nervous system issues.In fact, there have even been cases of deaths due to drinking fake alcohol!

Fake alcohol is a rampant issue across the globe. There have been many cases regarding these counterfeit alcohol over the past decade. Though some people would be thanking the heavens for cheaper versions of those famous liquor brands, but waking up the next day with the worst headache of your life is when you know you’ve messed up. After all, these fake liquor usually contain chemicals, colour dyes, and various other components which aren’t safe for consumption.

So,as consumers, we must be vigilant in avoiding those nasty chemical concoctions to save our own livers from harm. How? Here are a few tips!

1. Not all duty free alcohol are the real deal

Sure, duty free means it should be cheap right? Not entirely. Usually, proper alcohol stores and duty free shops would be stringent about their sources and would avoid the smaller vendors who are highly likely to be trading fake liquor. So, try avoiding those dodgy-looking stores.

More often than not, these counterfeit items have mistakes in their spellings and their packaging would look rather different or messy. For example: Names such as Johnnie Walker should be with an ‘ie’ and not a ‘y’. Chivas Regal would suddenly be turned into Chivas Rigal.

4. Check for duty stamps and barcodes

Bottles of alcohol larger than a certain amount (usually 350ml) must have duty stamps when imported into the country. Usually, bottles of hard liquor, wine, and beers are around 750ml to 1 litre. If you have a barcode checker on your phone, pull out the app and check those barcodes. It is quite common for counterfeit bottles to have fake barcodes too.

5. Price too good to be true

The prices of fake liquor can go super low because they don’t cost much to make in the first place. Sometimes even reputable bars and clubs would distribute the fake ones under the pretense of ‘free drinks’ or special deals.
Well, who would be giving out expensive bottles of whiskey, brandy, champagne, wine, etc. for half the original price or lesser, or at no cost at all?
If you’re unsure of what the rough estimate price should be, then you can check using www.globalalcoholprices.comto make appropriate comparisons.

6. Check the manufacturing and expiration dates

The scariest part about fake alcohol is how vendors would buy back empty real bottles from bars and clubs, then fill those bottles with the contraband liquid!
If the date seems to be way too long ago, then that’s likely a recycled bottled. So, to make sure you’re not drinking fake alcohol (or at least expired ones), check the expiry date on the bottle. They are usually printed on the cap but some may be on the stickers too.

7. Take a closer look at the colour and texture of the liquid

If you’re doubting the shade of your alcohol, then they may not be the real deal. Besides that, these liquids are usually clear and should not contain different shades.
Some of the fake ones will look like they have particles or different ‘layers’ in them. That is a massive red light!

8. Sniff the liquid before you consume it

Alcohol smells strong, spicy, woody or fruity depending on the type you purchase. However, it will definitely NOT smell like nail varnish, turpentine, or chemicals –which are common scents for fake hard liquor.

9. If it tastes so hot like chilli, it’s fake

Every alcoholic beverage has some kind of natural heat or spice to it. However, fake ones would use chillies or strong chemicals to mimic that burning sensation.

Nevertheless, the burning sensation from alcohol would still feel smooth while going down the throat. If the burn is much stronger than it should be and causes you to cough terribly and continuously, then it may just be fake.

10. A hangover would feel like you’ve been hammered in the head with a brick

Needless to say, since you’re ingesting chemicals, your ‘hangover’ the next day will feel like an absolute blow to your brain. Hangovers are bad, but if you feel like you’ve just been smacked at the back of your head with a bat, then never go back to that bar again!

Now that you’ve read these tips on how to spot or avoid fake liquor, just beware the next time you go drinking. Sometimes, even reputable pubs, bars and clubs might resort to selling fake alcohol for quick money. Anyway, here’s the number one rule: If you’re not sure, SKIP it all together!