Will insects become an essential food against malnutrition? 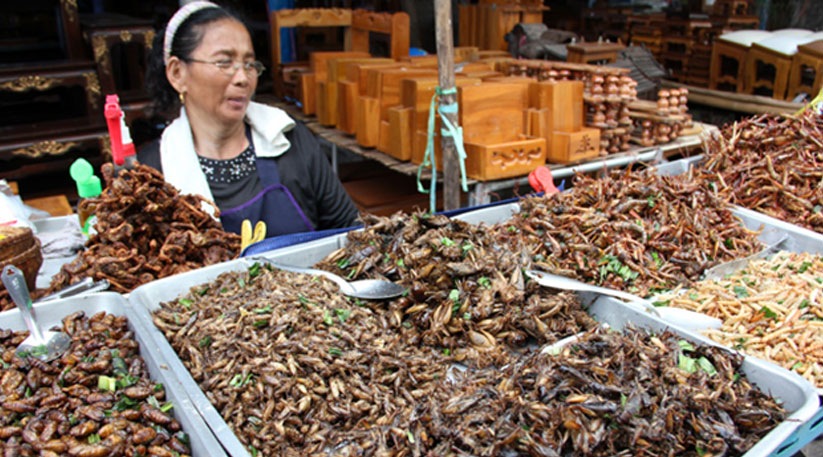 MANILA — Paijit Sangchai’s original business was manufacturing egg trays made of recycled paper materials. But three years ago, he expanded his business to sell Star Bugs, fried crickets as snacks.

The expansion was triggered by one of his patrons, a cricket farmer who first inspired Sangchai to modify his egg trays to make it more fitting to serve as a “house” for the insects, and to create cricket feeds.

Later on, the same farmer nudged Sangchai to buy his extra supply of crickets. The farmer started to harvest more of the insects, exceeding market demand and creating an oversupply. He then approached Sanghcchai to buy it, who at first, was unsure how he could be involved.

“Normally the cricket business in Thailand, it’s just like a food hawker along the street … [but] it’s not our style,” Sangchai said during Asian Development Bank-hosted Rural Development and Foodx Security Forum in Manila.

With the help of a friend working in the beer industry, Sangchai used the barley waste from the beer breweries to create cricket feeds for the farmer, and now crickets that fed on the waste are sold as Star Bugs snacks along with beer in Thai pubs and bars.

Selling cricket-based food allows Sangchai to create income for farmers and also help address micronutrient deficiencies, he said. Insects are a high protein resource, while being low on carbohydrates.

But he said that there’s still a need to raise awareness and educate people on insects as food to boost the revenue of businesses, such as Star Bugs.

He said most people are still not used to consuming insects, with some feeling disgusted to eat one, including in Thailand, his home country. In Bangkok, not everyone is attuned to eating insects, despite it being a common sight on the city’s streets, he said.

The edible insect market is expected to reach $1.18 billion by 2023, according to market research, with the largest share of the market in the Asia-Pacific. Crickets are most popular because of their high nutritional value and are easy to farm. A number of food companies have used crickets in their food products and several restaurants have used them in their recipes.

In 2016, a group of stakeholders promoting entomophagy as an alternative protein source to fight malnutrition and as a source of livelihood came together and created the Asian Food and Feed Insect Association, of which Star Bugs is a member.

At the forum, one of their goals was to pitch the idea of using edible insects to fight malnutrition. Apart from protein, insects like crickets also contain zinc and iron, as well as calcium and phosphorus for bone growth, said Neil Ian Lumanlan, vice secretary of AFFIA.

But the group, now three years old, still struggles to gather interest from the development sector.

Lumanlan said he raised the topic of insects during one of the sessions at the three-day ADB-hosted forum but has received no response from participants.

“Many agencies have been working on this [insects for consumption] in the past and people are now forgetting about it. So we have to sit down and talk about … what can be done,” he said.

He said he met with World Food Programme executives at the forum but was told it’s not within their area of primary work. The Food and Agriculture Organization meanwhile released publications on how beneficial insects are on the future of the world’s population, but Lumanlan felt the organization has not talked about it much in recent years.

“I think things were hot around early 2010 through 2013, but after 2015 to 2017, nobody was talking about insects as food and feed. And we’re talking about food security and rural development,” he said.

Katinka De Balogh, FAO senior animal health and production officer based in Bangkok, told us the topic has not been pursued as much in recent years following the retirement of Paul Vantomme from headquarters, and Patrick Durst from FAO’s regional office in the Asia-Pacific — both forestry experts.

“I’m planning to take this up now as well with colleagues in headquarters,” she said. “I’m in the livestock group and we are very much interested to look at it as a source of animal feeds in addition for human nutrition.”

In the next year, she and colleagues plan to develop activities looking into the opportunities of including insects as animal feed and as a viable source of protein, but with less environmental impacts compared to soya, for example.

She is also interested in engaging in a dialogue with the food industry in insect production to understand their constraints.

“For example, in the European Union, presently, insects are permitted to be fed to fish and to pets, but they are working on to integrate it into chicken and pork production. So this would be a big move forward if the European Union develops new regulations permitting this. I think this will give a huge push to the sector, not only in Europe but worldwide,” she said.

However, those involved in producing insects for human consumption may be limited in terms of their market.

“I think to have the insects as snacks and in their whole form … the market [would be] very much limited to specific Asian countries and maybe also other countries in the world where culturally … people consume insects,” she said.

But for markets such as in Europe, Canada, or the United States, De Balogh said insect food like cricket powder integrated into flour used for cookies or pasta — which is what Star Bugs is also selling — might be a more viable option.

But how effective will insects be to address malnutrition? She said there’s a need to gather more information on different insects’ composition as well as how one can influence insects’ nutritional value.

There are many different species of insects, and their nutritional content is very much dependent on what they are fed on. Insects fed with lots of carrots will have higher vitamin A content, for example. Those on a high protein diet will also be a rich source of protein, versus when they are mostly fed fiber or less nutritious substrates, she said.

“We have to be careful because as insects are such good converters of feeds, they will also absorb a lot of the nutrients and maybe also the toxins that are in the nutrition that we provide to the insects.”

Understanding their composition is also critical. The chitin in crickets for example is similar to the one found in shrimps. And so people that are allergic to shrimps could also form an allergic reaction against crickets, she said.

“So these things we need to be very careful about, and this will also need to be included in the labeling of the products in the future,” she said.