Try Before Die: Southeast Asian Beers & Food You Should Pair It With 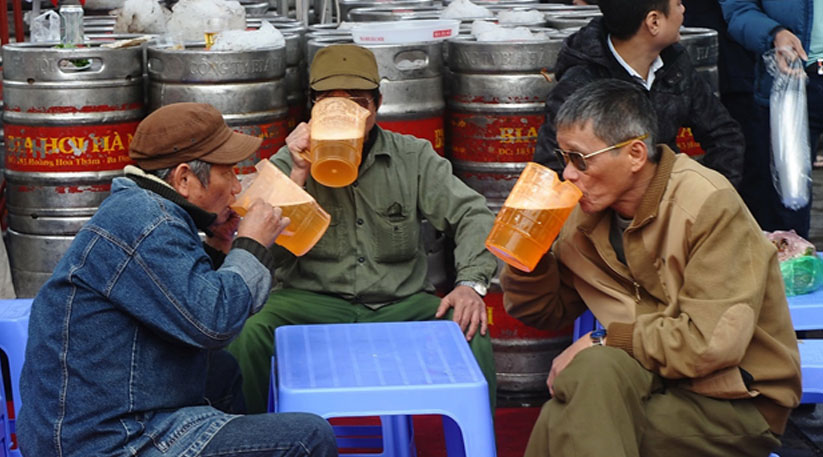 It may be fun, but travelling a foreign country can be tiring. A great way to unwind and welcome yourself to the start of your holiday (or work trip) is with some frothy servings of ice cold beer. Although humans speak different languages, there is always that one thing we have in common – we all like beer.

While most of us know the common brands available worldwide, like Heineken, Budweiser and Carlsberg, to name a few, the Food Experts at Ricebowl Asia would like our readers to embark on an exploration of new flavors. Especially if you are travelling to South-East Asia, where the countries offer an overwhelming range of food and drinks. When you’re there, one thing you have to try out are their local beers.

If you find yourself on a plane to any of the following countries, feel free to indulge in our recommendations:

Introduced in 1995 and known for its full flavor and crisp golden color, Chang is the most popular beer in Thailand. Enjoyed best when it’s chilled, Chang has a subtle aroma of fruit with every sip. This Thai beer brand claims that their deep water wells extract water from 200 meters underground, providing soft water that is low in mineral content and free of contaminants. If you have no plans on traveling to Thailand anytime soon, worry not. Chang beer is available in 50 countries, including India, USA, Russia, Canada and Switzerland.

Established way before Chang in 1933, Singha is brewed by the oldest known brewery in Thailand, Boon Rawd Brewery. The logo features a golden lion, which is inspired by the name attributed to the four great lions in Thai literature believed to be the king of the Himmapan forest. The beer is considered to be rich in taste with a prominent white head.

What to pair it with: Thai food is known to be spicy, which is a great pairing for beer. One must try Naem sausages (fermented Thai pork sausages) or Thai Massaman chicken curry with rice and cool down the spiciness with Singha beer.

You may have heard of Beerlao as it is a multi-award winning beer brand. Brewed since 1972 by Lao brewery under European Brewery Convention approved methods. Lao brewery also manufactures carbonated drinks and bottled water. Beerlao is available in two variations: the white lager and the dark version. The beer is a light, clear golden with a thick frothy head.

Laotian foods are most times more salty than sweet, which is perfect to cut the bitterness of the beer. Try Sui Oua, pork sausages that are infused with herbs with a subtle sour taste; or Sin Dat, a Lao barbeque with assorted meats and vegetables. Ping Moo, grilled pork served with sticky rice is another delicacy to try. The more daring tourists can explore fried insects (crickets and waterbugs) to wash down with a pint of Beerlao.

Historically known as the drink that brings Vietnamese together, Bia Ha Noi is a light draft beer that was left by the French, along with the Hommel Brewery, which soon became Hanoi Brewery in 1954. This Vietnamese signature beer is mild and watered down, with only 4% alcohol content. With a modest price tag, Bia Ha Noi is perfect for travelers with tight wallets. One can travel to Bia Hoi corner, where the street is lined with colorful stools of green, red and blue. Locals come together in astonishing numbers to get a glass of this concoction. You might find someone even buy you a glass (thanks to the cheap price) to welcome you.

Bia Saigon is another popular beer in Vietnam. This golden beer has a medium sized frothy head. It is a crisp lager with a slightly sour taste. Produced in Ho Chi Minh city, Bia Saigon bares a red and green label. The red label is used to export and is said to be slightly stronger than the green label created for the locals. When drinking with locals, don’t be surprise to see them drink the beer with ice cubes.

A little spice and meat is perfect with a cold beer (especially one you drink with ice). We suggest a Banh Mi sandwich, a baguette like bread filled with meat and vegetables. It is common for people drinking, to munch on roasted peanuts, rice crackers or crispy pumpkin seeds.

While Myanmar has a catalog of local beers, Dagon Beer is considered one of the stronger contenders: it’s light, sweetish and hoppy, with a somewhat metallic and malty aftertaste. Reflecting on Myanmar’s long history as a rice-growing power in Southeast Asia, Dagon Beer is brewed with rice. Compared to European beers, rice lagers tend to be lighter, crisper and a little fruitier, and Dagon Beer is no exception!

What to enjoy Dagon beer with:

If you’re in Bagan, an ancient city in the Mandalay region of Myanmar, enjoy your glass of Dagon beer with some deep-fried snacks that you would find on the road sides. Consists of leafy vegetables, onions, sweet potatoes, tofu and mock meat and served with a sweet and tangy sauce, it is simply the perfect combination.

The most sought after beer of Cambodia, Angkor beer is a lager with full, rich flavor along with a fast diminishing, medium white head. The name is inspired by the Khmer Angkor temples. Brewed by Sambrew Brewery at Sihanoukville since 1963. The brewery is known to manufacture so much beer that you might just pop open a bottle that is as fresh as less than 3 hours old. The beer is clear gold, and is known to have slight bitterness to its taste.

Cambodia’s cuisine may be underrated, but it packs a serious flavor punch. We would suggest Amok which is a fish- based curry served in a banana leaf with rice and fried eggs. You could also opt for fresh spring rolls. Unlike the kind we are used to, these are not fried. Filled with meats and vegetables, they are served with a dip of chillies, peanuts and limes. Do not miss out on Beef Lok lak, which is beef cooked in lime and pepper sauce served with eggs and fried potatoes.

Ask any Australians that flock to Bali for their holidays, Bir Bintang is arguably the most popular beer in Indonesia. Found in almost any outlet that serves alcohol, this golden, refreshing drink does not particularly have any distinctive taste. In fact, it is often found to be compared with Heineken beer (Bintang is a part of the company itself). A mild beer with a short white head, Bir Bintang is easy on the palate and can be enjoyed by almost everyone. The name means star in Indonesian language. The company also produces a non-alcoholic version called Bintang Zero.

What to eat while sipping Bir Bintang:

When you are in Indonesia and enjoying a Bir Bintang, you would often be served with fried peanuts and melinjo crackers. However, if you wish to taste something more authentic to the country, try their barbeque assortments like grilled ribs, fish or rica rica, a meat dish cooked in an enormous amount of spices, especially red chilli.

Made by Sri Lanka’s number one brewery, Lion is a popular beer that is available in various versions, including lager, stout, and strong – with lager being their top seller. A slightly sweet and mild beer, it is a golden roasted malt with undertones of fruit and caramel flavoring. The beer is made at Lion Brewery, who claim to be using traditional recipes and techniques since 1860. The lion on the label symbolizes visionary leadership and power.

What to eat with Lion beer:

Sri Lankan cuisine is known for its fiery flavors, undoubtedly delicious with a pint of beer. Rice and curry are a staple in the country and fortunately go well with Lion beer. Curries can have meat or vegetables and are found in many variants, including garlic, jackfruit, aubergine and pumpkin. You could also try the spicy devilled prawns or Bittara Appa, the wok like shaped batter with a fried egg in the middle.

Produced in Manila since 1890, San Miguel owns around 90% of the Philippines’ beer market.  A full-flavored pilsner with hints of caramel and a malty top note, San Miguel Pale Pilsen is meant to be imbibed in warm weather. When ordering in the Philippines, you can just tell the waiter to get you “Pale”, just “Pale”, and he’ll know what to do.

What to drink it with:

San Miguel is best to be consumed alongside greasy Filipino side dishes you can find in the streets of Metro Manila like balut (chicken embryo) and Champinones al Ajillo (mushrooms cooked in butter and/or olive oil with lots of garlic). But ask any Filipinos and they would say Chicaron (pork cracklings) is their favorite snack alongside a pint of San Miguel beer.