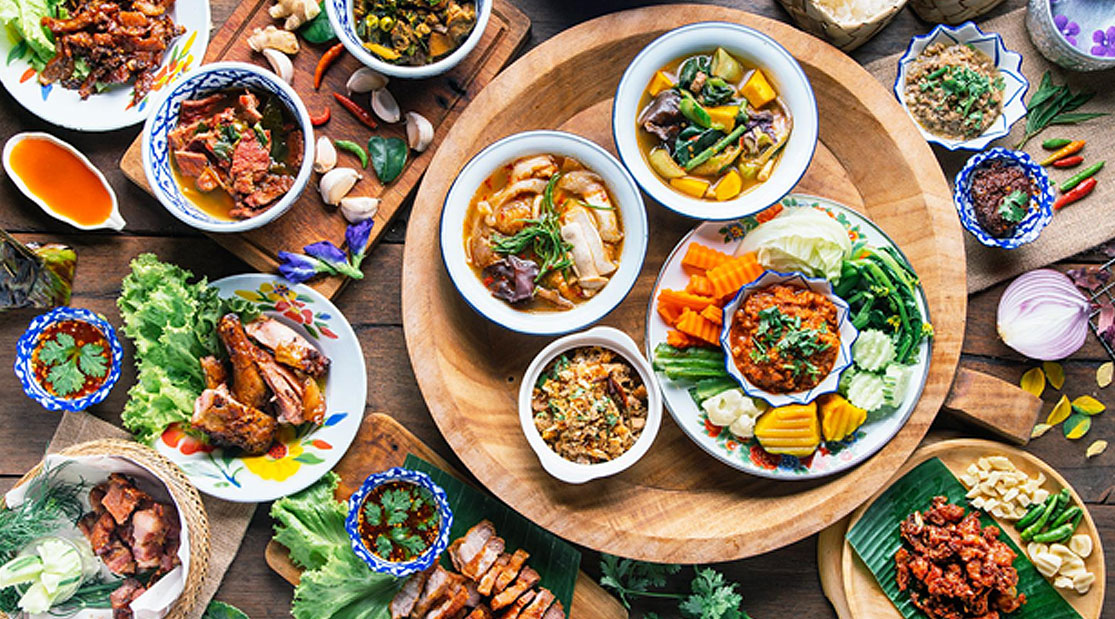 If you only eat at upscale restaurants geared to foreigners, you’ll miss out on the chili, fish sauce, and bright herbal flavors that define Thai cuisine; you’ll also miss out on some of Thailand’s true culinary giants.

In Thailand a good rule of thumb is, the less you pay for the food, the better it is. And the food offered by street vendors is very cheap and very good. At any hour, day or night, Thais crowd around sidewalk carts and stalls, slurping noodles or devouring fiery som tam (green papaya salad) for just pennies. Locals will probably be eating the cart’s specialty so if you’re not sure what to eat, just point! Here are a few common and delicious dishes you’ll find in Bangkok.

This traditional Thai dessert can be found at food stands dedicated to mango treats, most often during the summer months which are prime mango season. This dish is made up of sticky glutinous rice doused in coconut milk and served with a side of sliced mango. Note: mango sticky rice is best if consumed immediately as the rice will harden and the mango will spoil in the heat. Don’t be surprised if you see locals eating this dessert by hand.

Pad Thai is one of the national dishes of Thailand and this dish can be found almost everywhere in Bangkok. During WWII, Thailand faced a rice shortage due to the war and floods. To combat the shortage, the government promoted a noodle rich diet. As a result, this dish became extremely popular with the locals. Pad Thai is a stir fry noodle dish cooked with egg, tofu, seafood or meat, fish sauce, crushed peanuts, and a lot of fresh vegetables such as bean sprouts and carrots. It is most commonly found with the egg mixed in but if you are lucky, you will find a vendor that offers an omelet option where the noodles come encased in a fluffy omelet.

Chicken Over Rice is a famous street food dish enjoyed in many parts of Asia, most notably in Singapore. For the Thai version, rice is cooked in a fatty chicken broth, topped with tender, boiled chicken, a side of crisp vegetables, and a green sauce with a spicy kick. This dish is commonly found after a few drinks as the most famous vendors in the city don’t start serving until 11 p.m.

This hot and sour seafood soup (typically served with shrimp) is a popular variation of Tom Yum soup—a delicious and aromatic water-based soup. A special paste is the base of the soup and then the broth is seasoned with herbs and spices. You can often also find a variation made with coconut milk. Stalls selling this dish will have the broth prepared but the veggies and chilies will be stir-fried in front of you. Tom Yum Goong is widely accepted to have curative properties so if you’ve had too many Singha beers or you’re just dragging a little, try this dish!

This dish can be found along the canals in Bangkok, hence the name “Boat” Noodles. Historically, this dish was served from boats on the city’s canals but nowadays you can also find street vendors and riverside vendors offering it. There is a “Boat Noodle Alley” in Bangkok where you can find rows of vendors specializing in this dish. Boat noodles are traditionally served with both pork and beef and a splash of pig’s blood. Don’t be shocked by the portion sizes as it is usually served in a rather small bowl.

The Thai version of a crepe, Egg Prata originated in India, but Thai chefs have made it their own, offering unique, sweet fillings. In Bangkok, you will find vendors that are dedicated solely to different variations of this dish. They often serve the Prata cut into squares and served on wood skewers. The most popular fillings are fruit (like strawberry or banana) with condensed milk or Nutella.

Som Tam or Som Tum is a refreshing Thai papaya salad made from shredded papaya and commonly served with small cooked shrimp, peanuts, and tomatoes. Some vendors will also give you the option of throwing in a crushed hard-boiled egg. This salad can be commonly found in restaurants but it is best experienced from a street cart, prepared fresh in front of you (where you can also customize its spiciness to your preference.)

Congee, or rice porridge, has variations all over Asia. In Thailand, it is called Jok (and pronounced “joke”) and consumed by locals to start the day but it can be eaten at any time of the day. Thai Congee is typically served with pork (meatballs and/or liver pieces), an egg, and garnishes such as green onion and ginger.

In Thailand, the locals will often joke about the “one finger rule.” Quite simply, this means that whatever you purchase, must be wrapped or packaged in a plastic bag that can be carried by a single finger. Most vendors will sell you a cold beverage with a straw served in a tiny plastic bag that can be hung on a finger. Drinks are served this way to prevent you from warming up the drink and getting your hands wet when the drink begins to cool. You’ll see a ton of locals carrying these drinks on their finger all around Bangkok and just try resisting the urge to join in!