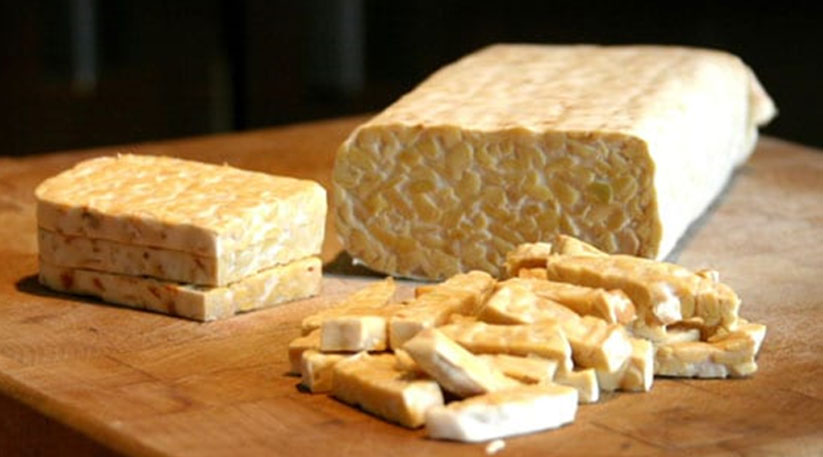 Many people, especially those in Indonesia, must have eaten tempeh, and for many of them, tempeh is probably their favorite food. Is it true that tempeh is only associated with the food Indonesian people eat? Not really, because this food has become more and more popular in a number of countries abroad. To promote tempeh, Sergio Andino and Jessica Hermawan, both students of  Faculty of Biotechnology, Atma Jaya Catholic University (ACU), participate in the Indonesian Tempe Movement.

Similar to Sergio, Jessica also pointed out that tempeh is food that is healthful for consumption. In addition to being inexpensive and easy to buy, tempeh is the original Indonesian food that we should be proud of.

“So, if more people know that tempeh is originally from Indonesia, then our country, Indonesia, will also be better known and tempeh will become more popular. Maybe one day tempeh and Indonesia can be like kimchi which is identical to Korea,” said Jessica.

Talking about tempeh, Sergion has been obsessed with the food since he was a high school student. In the beginning, he learned that one of the benefits of tempeh is for bodybuilding. In addition, he would like to gain weight because he did not eat regularly and therefore always felt exhausted.

As for Jessica, she began to be interested in tempeh when she started to study at the university. Then she learned the benefits of eating tempeh and the facts about tempeh. She is of the opinion that tempeh can be a solution to the hunger problem in the world, especially the malnutrition problem suffered by many children.

“In the beginning, I was interested in tempeh when I was listening to someone describing the facts about tempeh, especially about the contents of tempeh and its simple manufacturing process, and the positive impacts of tempeh for many people. Tempeh may become another option for expensive food high in protein such as meat or fish and therefore may be a viable solution to the hunger problem in the world,” said Jessica.

Sergio and Jessica are interested in participating in the  Indonesian Tempeh Movement not only because their favorite food is tempeh, but also because they are concerned with people’s insufficient knowledge about tempeh. Thus, they become more and more motivated to introduce tempeh to the wider society.

“This is a campaign promoting tempeh. We hope that people become curious about tempeh, and then would like to learn about the benefits of tempeh before finally decide to include it in their diet,” said Sergio.

Through the Indonesian Tempeh Movement, they try to provide people with information about tempeh, a healthy, inexpensive, and environment-friend food. In addition, they encourage people to be proud of eating tempeh because this original food from Indonesia is very healthful.

They conducted several workshops about the importance of tempeh and the ways to manufacture it in a number of places. A few foreigners from Thailand, Ecuador, and Germany even went to Bogor to learn how to make it. In addition, they also provided hard skill training by empowering the family and community that manufacture tempeh.

Sergio, together with the Indonesian Tempeh Movement also managed to manufacture a product called ‘Kripe Tempe Chips’. Initially the product was made specifically for natural disaster victims in Lombok, Palu, and Banten so that they were able to eat nutritious food. Kripe Tempe Chips were made in such a way so that their healthful nutritious contents were not lost and were therefore suitable as dietary food for the victims after the disaster. In this way, the victims were still able to obtain nutrition and protein despite their limited number.

The Indonesian Tempe Movement is expected to provide people with the necessary information about the benefits of tempeh as the food has the potential to fulfill people’s needs for protein. In addition, the movement would like to promote the original food from Indonesia and encourage people to be proud of this locally-made food that has been internationally recognized. If society is already proud of tempeh, it is hoped that there is a positive effect on the Indonesian economy and local soybean farmers.