What is the manufacturing process of Nata de Coco?

Nata de Coco, a cellulosic white to creamy yellow dessert that’s originally from the Philippines, is produced by fermentation of coconut water with a culture of Acetobacter xylinum.

What are the ingredients/ materials used for the production of Nata de Coco?

What is the microbial starter culture used for production of Nata de Coco?

Microbial starter culture is the most important ingredient in the formation of Nata de Coco. At the factory, post-fermentation liquid is used where it’s a common practice to prepare a culture starter by separating a small portion of Nata medium formula and allowing it to ferment for 3-5 days before it is used as starter. However, this method has a great possibility of starter culture contamination. Therefore, the better solution is to prepare starter culture by reusing post-fermentation liquid after the product has been harvested (Sancez, 2008)

Studies showed that without adding nutrients, pineapple liquid waste is a good medium to grow Acetobacter xylinum. Pineapple liquid waste without sugar and Zinc Ammonia addition are whiter and brighter. The more balance its pH the whiter the Nata de Coco will be (Sutanto, 2012).

The Production and Harvesting Process of Nata de Coco 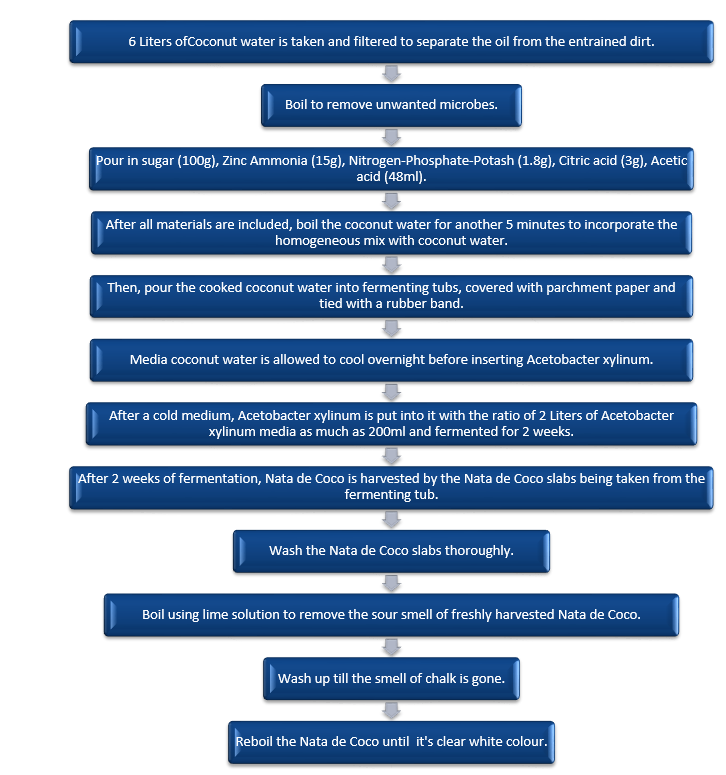 In conclusion, Nata de Coco is low in calories and high in dietary fiber which is good for diet purposes. It can be served as a dessert in it’s sweetened form. Nata de coco is popularly used as ingredients in ice cream, halo-halo, and other fruit preparations such as cocktails and salads.