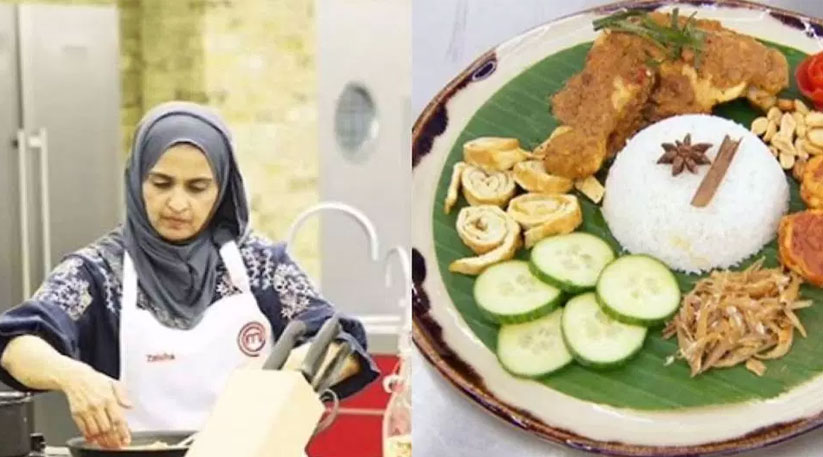 When a chicken dish eliminated a Malaysian-born woman from reality TV show MasterChef UK last week because it was just not crispy enough, a nation saw red.

It was served as an accompaniment to nasi lemak, a beloved Malaysian dish.

Malaysians have been flocking to social media in fury to point out the judges simply got chicken rendang all wrong.

“I like the rendang flavour, there’s a coconut sweetness. However, the chicken skin isn’t crispy. It can’t be eaten and all the sauce is on the skin so I can’t eat it,” Mr Wallace remarked.

“Utter ridiculousness,” wrote Sujita Soorian in response to a Facebook post about the story. “Crispy chicken rendang? Did the judges think that this was fish and chips? Calling themselves ‘celebrity chefs’ when they only know about food from their own culture. Such limited knowledge of cuisine from around the world. Shame on them really.”

Malaysian journalist and food writer Jahabar Sadiq concurs, saying that calling for the dish to be “crispy” rather than “soft and tender” was ignorant.

“They clearly weren’t familiar with food from other parts of the world because if they were, they would have had the knowledge to know what real nasi lemak is,” he told BBC News from Kuala Lumpur.

“Crispy chicken? No. The meat has to be soft and that’s a result of hours of cooking…Many people associate chicken with being fried but there is no craft, no skill. But this is chicken rendang, not KFC so it all boils down to how the chef controls the spices and the flames. The amount of coconut milk is also key.”

The dish consists of coconut milk-infused rice accompanied by various ingredients such as a fried egg, cucumber slices, tiny fried anchovies, peanuts, and a hefty dollop of a spicy chilli paste known as sambal – and served in a banana leaf.

More extravagant versions of the dish come served with chicken or beef rendang, a rich South East Asian curry that’s made by stewing meat in coconut milk and spices until it becomes tender.

Ms Zaleha had already made her mark by wowing the judging panel with her brand of South East Asian cuisine.

She shared fond memories of the dish, saying that it was the first thing her mother had cooked for her husband when Ms Zaleha brought him home to meet her parents. And it was also a “childhood favourite”.

“There was a special stall outside my school that sold the best nasi lemak so I used to save up pocket money on Fridays,” she explained to the judges. “The dish is very special to me.”

But Mr Torode called her chicken rendang “a mistake” and said it hadn’t had time to cook down and become soft. It marked her exit from the show.

“I have worked a lot, really worked hard today and I thought they would like it,” she said.

On Instagram, Ms Zaleha said she was “gutted” about her MasterChef UK departure. But her emotional exit has drawn great sympathy from many viewers who point out that she is far more likely to be an authority on an authentic chicken rendang and nasi lemak than others.

In the days that have followed, nothing has diluted the slight felt by Malaysians on social media about the lack of awareness of a dish close to the national heart.

“When Malaysian food gets insulted, an entire nation stands up,” one Facebook user wrote.

“Colonised us for more than 100 years for spices but in the end, still having no idea how food works,” said another angry user, showing that old wounds cut deep.

The debate even got political, with ministers and diplomats weighing in.

Taking a jab at the controversy, even Malaysian Prime Minister Najib Razak tweeted his thought about chicken rendang which went down well with his followers.