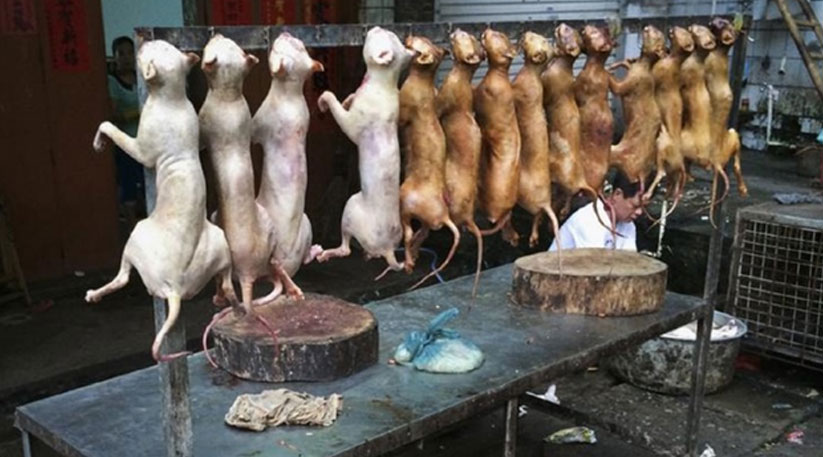 ANTI DOG-EATING campaigners are gathering a fast-growing number of signatures in a bid to stop the massacre of dogs taking place every year at the Yulin dog eating festival taking place next month.

Preparations for the tenth edition of the annual dog meat festival in Chinese city of Yulin are in full effect but activists and animal lovers are taking actions to make their voices heard and have the event banned.

More than three million people have so far signed online petitions on various platform including Change.org, but the number grows by the minute as pictures of terrified pets crammed into cages or boiled alive go around the world.

One of the main platforms fighting for the ban of Yulin festival, StopYulinForever.org, has been organising marches and public events in the US to increase global awareness on the issue, gathering more than 2.8 million signatures just this year.

And devoted Chinese pet lovers are also organising protests and petitions to stop the festival, which will take place between June 21-30.

Other young Chinese people have been parading with their dogs in Dalian’s Xinghai Square last week, where they unveiled a giant banner proclaiming “Build a Beautiful China, Punish Animal Abusers.”

But despite the global condemnation, the Communist Chinese government looks set to give the go-ahead for the tenth year to organisers in Yulin, who went as far as threatening riots if the annual slaughter was banned.

Last year, traders and market holders were initially warned they would have faced 100,000 yuan (£11,000) fines and even arrest for selling dog meat.

But the measure was “watered down” after dog meat sellers voiced their unhappiness.

Wendy Higgins, Humane Society International (HSI)’s director of international media, said: “The traders had threatened civil unrest if it went ahead, and so the ban was watered down to a restriction on the amount of dog that could be sold.

“If only the authorities had held their nerve last year, we could have had a very different Yulin festival.

“They clearly acknowledged that they needed to do something, and they would have won the praise of campaigners around the world, but they just didn’t follow through unfortunately.”

Chinese authorities has been challenged already by anti-dog meat campaigners in 2016, when more than 11 million people signed a petition against the festival.

Peter Li, China policy expert at HSI, said in a statement after presenting the petition to the Yulin government office in Beijing: “China’s dog meat trade is animal abuse and criminality on a massive scale, and a stain on China’s international reputation.”

Some 30 million dogs are slaughtered for their meat across Asia every year and more than a third is consumed in China.

But a recent study showed that dog meat consumption is not popular in Yulin.

The poll, which was conducted by Chinese state-registered charities and assisted by a team of six research staff from the Yulin Municipal Government, revealed that 72 per cent of Yulin residents do not regularly eat dog meat and 12 per cent never tried it.

The study confirms the new attitude towards pets brought forward by young and middle-class Chinese, who are increasingly against the consumption of dog meat.

A survey carried out by state broadcaster China Central Television in 2016 found that 56 per cent of respondents would support a law banning the eating of dogs, while 40 per cent would oppose such a law.

As a consequence, the popularity of the festival itself seems to be decreasing.