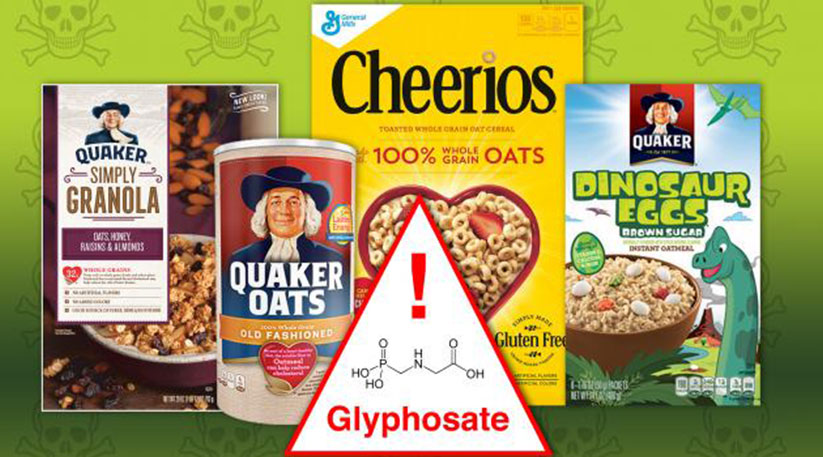 Environmental Working Group (EWG) (2018) has recently released a shocking report where they discovered the presence of Glyphosate, a type of common herbicide in breakfast foods including oat cereals, oatmeal, granola and snack bars.

What has been stated in EWG Report?

In the newly released report, the EWG conducted toxicology tests on dozens of oat-based foods sold across the market and used a health benchmark for Glyphosate based on a cancer risk assessment that was developed by California state scientists.

The report has determined that Glyphosate was found in 43 out of the 45 products tested. Only two products were free from traces of the herbicide. 12 samples contained amounts of Glyphosate that were lower than what the EWG believes is harmful to consume, whereas 31 of the samples contained levels of Glyphosate that are higher than the group’s health benchmark (EWG, 2018). The highest levels were detected in two samples of Quaker Old Fashioned Oats (Temkin, 2018).

What is glyphosate and how is it harmful?

Glyphosate is the most dominantly used pesticide to kill both broadleaf plants and grasses. They are used all over the world to protect agricultural and horticultural crops (Connolly et al., 2018). Glyphosate has been linked to cancer by California state scientists and the World Health Organization (EWG, 2018).

Based on the company’s statement, Quaker does not add Glyphosate during any part of the milling process. Glyphosate is commonly used by farmers across the industry who apply it pre-harvest. “Once the oats are transported to us (Quaker), we put them through our rigorous process that thoroughly cleanses them (de-hulled, cleaned, roasted and flaked). Any levels of glyphosate that may remain are significantly below any regulatory limits and well within compliance of the safety standards set by the Environmental Protection Agency (EPA) and the European Food Safety Authority (EFSA) as safe for human consumption” – Quaker Oats Co., 2018.

California has listed Glyphosate in its Proposition 65 registry of chemicals known to cause cancer in 2017. The state’s Office of Environmental Health Hazard Assessment, or OEHHA, has proposed a so-called ‘No Significant Risk Level’ for glyphosate of 1.1 milligrams per day for an average adult of about 154 pounds. That level of exposure is more than 60 times lower than the safety level set by the Environmental Protection Agency (Temkin, 2018).

EWG calculated that a one-in-a-million cancer risk would be posed by ingestion of 0.01 milligrams of glyphosate per day. This means that one would only have to eat a single 60g serving of food with a glyphosate level of 160 parts per billion (ppb) to reach this maximum dose. The majority of samples of conventional oat products from EWG’s study exceeded 160ppb, meaning that a single serving of those products would exceed EWG’s health benchmark (Temkin, 2018).

Glyphosate has been on the agenda of regulatory agencies worldwide (Conrad et al., 2017, OEHHA, 2017). The European Chemicals Agency (ECHA) the European Food Safety Authority (EFSA), the Joint Food and Agriculture Organization of the United Nations and many other national authorities outside the EU (e.g. Canada, Japan, Australia, New Zealand) all refute the IARC classification. In 2017, the European Commission renewed the approval of Glyphosate for 5 years (European Commission, 2018; Connolly et al., 2018).

The concept of “safe” levels of Glyphosate exposure is controversial and varies markedly by country. For example, Europe, set the acceptable daily intake of glyphosate at 0.3 mg/kg/d, whereas the United States, set a level 5.8 times higher at 1.75 mg/kg/d (Mills et al, 2018).

EWG is urging the EPA to review all evidence linking Glyphosate to an increased in cancer risks and other adverse health effects in human and animal studies. The Environmental Protection Agency (EPA) should take action to review the limits in using Glyphosate on food crops, including the practice of applying it just before harvesting (EWG, 2018).

Temkin, A. (2018). Breakfast With a Dose of Roundup? Weed Killer in $289 Million Cancer Verdict Found in Oat Cereal and Granola Bars.