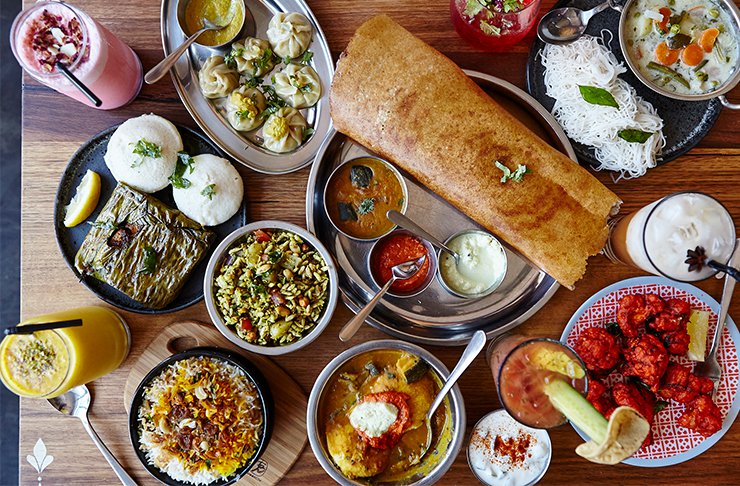 An experience of watching three hours of a Bollywood movie will not be complete without craving Indian food. Although mouth-watering, we’re not talking about the flavorful home cooked dishes. Asia’s food experts would want to bring you on a salivating tour through India’s salivating, flavorful and tantalizing street food.. Challo!

Mumbai’s own take on hamburger, only more flavorful, Vada Pav consists of a crispy fried potato dumpling (vada) rested in a soft bun (pav), smothered with fruity chutney, and complemented with a crunchy chili on the side for that added kick of spice.

Expect to eat 10 of these in one go. A small rounded snack, Paani Puri is made out of small deep-fried hollow ball of puffed bread (puri) with a small hole at the top, an ‘entrance’ for chickpeas and spiced mash potato. Once the goodies are filled in, the stuffed puri is then dunked into the pani – a spiced water with sweet & tangy tamarind chutney. Ricebowl Asia’s Food Experts advise you to place the whole thing in your mouth so that the pani does not spill.

A snack originated from North India, Aloo Tikki is made from boiled potatoes, onions and various curry spices. Aloo means potato, and the word Tikki means a small cutlet or croquette in Hindi, Marathi, and Tamil. It is served hot and warm along with a side of saunth, tamarind and coriander-mint sauce, and sometimes dahi (yogurt) or chick peas. Asia’s Food Experts feel that Aloo Tikki is an Indian equivalent of the hash brown.

Poha Jalebi is a delicacy from the streets of Indore and is very well known for its mouth-watering flavours. It is a combination of two flavorful delights – Poha – lightly fried flakes of flattened rice that is cooked with onions, potatoes, curry leaves, turmeric and coriander. And Jalebi – made from maida flour, deep fried and then soaked in sugar syrup. The light yet fulfilling breakfast option doesn’t cost much and it’s yummy! Asia’s Food Experts approve of Poha Jalebi.

Although hailing from Tibet and Nepal, Momos is dubbed as the king of Indian streetfood. A hot and spicy roadside gastronomy experience, Momos has escalated from roadside stalls to food centers and food courts in all busy city-malls.

Give the tangy spicy red sauce and steaming hot dumplings loaded with veggies or chicken a go whenever you come across Momos. Trust the Food Experts at Ricebowl Asia, we know food.

Not only enjoyed as a breakfast or served with evening tea, Akki Rotti is also one of the favourite common tiffin snacks. It is made of rice flour which is mixed with salt and water and kneaded well till the dough gets soft. Onions and carrots, dill leaves, coriander, cumin and sesame seeds are added while kneading the dough. Dipped with creamy coconut chutney, Akki Rotti is a staple cuisine available in roadside stalls, cafeteria and fancy eateries outside India.

Hailing from the land of Daawat-e-ishq, Mirchi Bajji are green chilli fritters that stuffed with onions and spices and served with lemon or tangy sauce. This snack requires bravery as the green chilies are known for inducing sweat and tears. If you are brave enough to try it for the first time we advise you to have a glass of water ready.

The ‘not so’ long lost cousin of Vada Pav, Misal Pav is considered as a railway station cuisine. It consists of misal – a spicy curry usually made of sprouted moth beans and pav (Indian bread roll). The final dish is topped with potato-chiwda mix, onions, lemon and coriander. It has all the mechanisms of the signature great tasting Indian flavor and allows for quick and fulfilling bite – a favorite amongst the train-takers.

It is definitely not hard to describe Bhelpuri – a flavor bomb! Puffed rice are tossed with sev (deep-fried noodles made from chickpea flour paste), chaat masala, diced onions, and tomatoes plus green chilies and cilantro as a garnish. This West Indian regional street food harmonized sweet, salty, and spicy flavors into one tasty, salivating snack.

Pronounced as Cool-fee, Kulfi is the Indian answer to the typical Ice Cream with notable taste and texture differences. Originated during the Mughal Empire in 16th century, it is believed that in the royal kitchens, Kulfi was made using ice that was sourced from the Himalayas. In present times, Kulfi is made from full fat milk that is boiled for hours for its caramelized flavor. It comes in various flavours, the more traditional ones are cream (malai), Rose, Mango, Cardamom (elaichi), Saffron (kesar or zafran), and Pistachio.