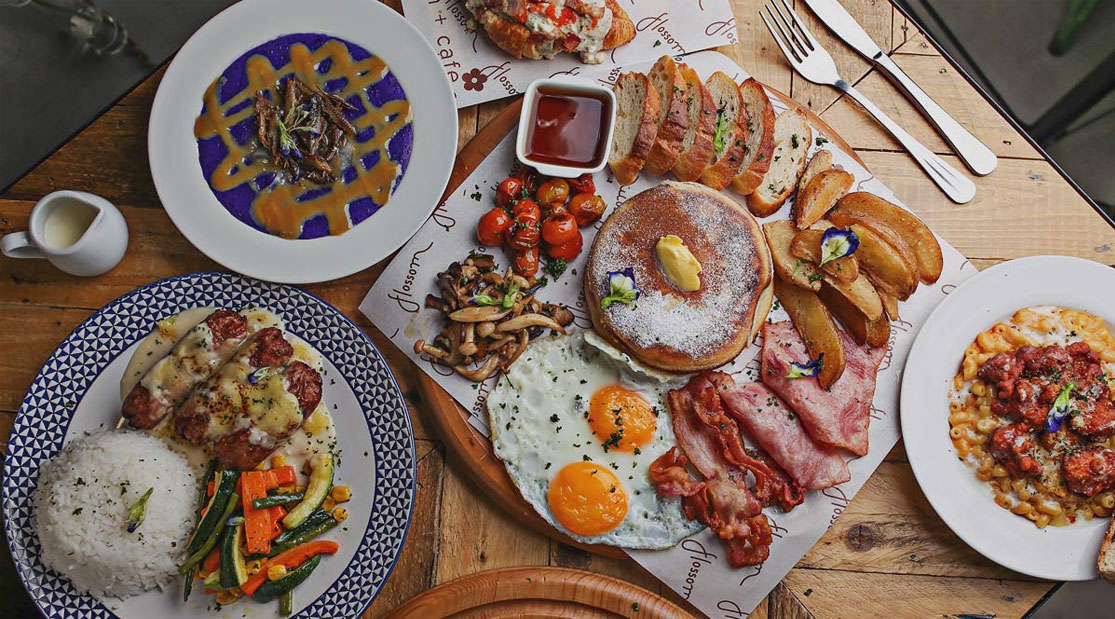 Filipinos love to eat. Aside from breakfast, lunch and dinners, they also eat in-between meals like a ‘pampa-init’ in the morning before the actual breakfast with rice, snacks before lunch and merienda during mid-afternoon and there are even some who would still grab quick midnight snacks.
Since rice is the staple food for Filipinos, you will also be seeing some rice dishes with other foods that you would usually see on a Filipino breakfast table.

Pandesal (Bread of Salt) is probably the most in demand bread in the Philippines because it is one of the most favorite breakfast foods for most Pinoys.
It can be eaten with “palaman” or filling such as scrambled or sunny side up egg, peanut butter, Cheez Whiz or a slice of cheese. Many would simply dip the pandesal in a cup of hot coffee or “chokolate” made from “tableya” (pure cocoa).
Pandesal is so in demand that you will not be able to buy this if you do not wake up early. You would normally see people lining up in front of a bakeshop every morning just to buy pandesal for breakfast. This is also a top seller during Christmas season especially in bakeshops near a church because people would usually buy this bread after the “Simbang gabi” or night mass which is actually celebrated early in the morning also called “Misa de gallo in Spanish.

Karne Norte is one of Filipinos’ favorites for breakfast especially if it is mixed with egg. The sautéed corned beef also goes well with plain or fried rice. Plus you can also use it as “palaman” (filling) of pandesal or sliced bread.
It is one of the most frequently served breakfast in Filipino households because it is easy to prepare, perfect for people who are always in a hurry every morning like students and those who needs to go to work early in the morning.
For a tastier karne norte, other people would add cubed potatoes or green peas.

Champorado is another favorite of Filipinos. It is a sweet chocolate rice porridge and Chocolate powder as main ingredients. A more traditional approach would be using ‘tableya’ or real cocoa or instead of Chocolate powder.
It can be eaten during breakfast or “meryenda” (snacks in the afternoon). Most people prefer to eat champorado with milk on top but there are some who prefers to have it with “tuyo” or salty dried fish.

Another favorite Pinoy breakfast is Bangusilo which is a combination of Sinangag rice, fried breaded bangus and a sunny side up egg.
Usually, Filipinos make sinangag out of the leftover rice from the night before as it is less sticky. The simplest fried rice is just leftover rice with garlic and a pinch of salt. Others add potato cubes or green peas while frying the rice.

A dish originated from China which Filipinos have localized, Pancit Bihon is the number one noodle dish in the Philippines. Its main ingredients are noodles, pork, chicken and vegetables.
You can eat this as is or with puto, bread or rice.
It is always served in Filipino occasions like fiestas, Christmas and most especially during birthday celebrations because it is believed to grant a longer life “pampahaba ng buhay.”

Longanisa is the Filipino version of chorizo. A perfect breakfast is Longanisa served with sinangag and sunny side up egg with a cup of hot coffee. This is a favorite in most regions in the country. There are other varieties of langonisa, but the most in demand are the ones made from ground pork.

Tapa is a thinly sliced dried beef added with salt and spices. It is designed as an easy to prepare breakfast food as you can simply grill or fry it in oil.
It is called Tapsilog if served with fried rice and egg.

Tocino is the Spanish take on bacon and is another favorite breakfast of Filipinos. It is easy to prepare; either by boiling it in a small amount of water or fry it in oil. It has a delectable smell that would surely awaken your taste buds.
When served with sinangag and egg, it’s called Tocilog.

Paksiw is a simple Filipino dish commonly served during breakfast, but it can also be eaten for lunch and dinner. This is usually served with newly cooked rice and hot tsokolate.
You simply cook fish in a pot with vinegar and garlic, but for a better taste, you can add lard while it is still boiling hot. A dish that goes very well with fried rice. Aside from fish, you can also opt for paksiw lechon or roasted pig and other meat.

Many of you may not have known this but Tortang talong is an eggplant omelet. It is a simple but yummy Filipino food. You can make this in less than 30 minutes. All you have to do; grill the eggplants then soak it in a beaten egg mixture and then fry. Just like other Filipino dishes, this can be served during breakfast, lunch and dinner served with plain rice. For a tastier tortang talong, dip it in a soy sauce with calamansi.