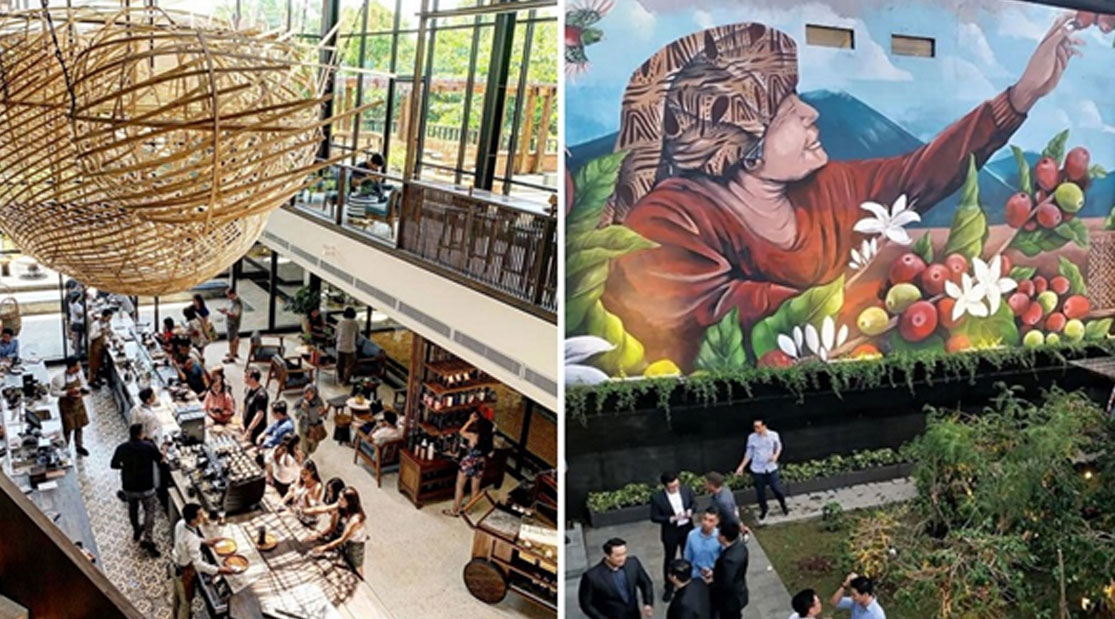 With swinging seats on the patio and plush couches in the library-themed room on the second floor, it will be easy to feel cozy and right at home in Southeast Asia’s largest Starbucks store.

Situated on Jl. Sunset Road in Seminyak, the store is built on over 2,000 square meters of land and boasts a laid-back layout. The resort island of Bali is a popular holiday spot among global travelers, and its status as a gateway tourist destination to Southeast Asia’s largest economy has led to US coffee giant Starbucks opening its largest store in the region.

Situated on Jl. Sunset Road in Seminyak, the store is built on over 2,000 square meters of land and boasts a laid-back layout. With swinging seats on the patio and plush couches in the library-themed room on the second floor, it will be easy to feel cozy and right at home in Southeast Asia’s largest Starbucks store.

The spacious building’s floor-to-ceiling windows on one side look out on to a micro-plot of arabica coffee trees measuring 100 sq. m, which mirrors the size of 90 percent of all coffee farms in the country, physically illustrating the store’s aim to give an insight from seed to cup.

Dewata goes beyond being a regular Starbucks hub, even with its upscale Reserve bar, as the store has been designed to become a coffee sanctuary that offers an in-depth look into the coffee-making process.

Indonesia is the world’s fourth-largest coffee producer after Brazil, Vietnam and Colombia, according to Trade Ministry data. There are six main coffee-growing areas in the country, namely Sumatra, Sulawesi, Java, Flores, Bali and West Papua.

Starbucks chief executive officer Kevin Johnson, who officially opened the store over the weekend, said the company had sourced arabica coffee from Indonesia since the beginning of its journey almost half a century ago.

“We started sourcing coffee here in Indonesia in 1971 when we opened, and today we are the largest buyer of arabica coffee in Indonesia,” Johnson said on Saturday. “Now that coffee is served in over 29,000 Starbucks stores, across 78 markets around the world,” he added.

Johnson, whose favorite brew is the specialized Aged Sumatra, said the Dewata store was also a tribute to coffee farmers around the world.

Since early in its inception, which began almost two years ago, the store was involved closely with the company’s farmer-support center in Indonesia in designing the unique concept of providing an elevated experience in showing how coffee grows, to how the cherry is processed and eventually becomes a beverage.

It offers guided tours to learn of the coffee-production journey, an experience only available at Dewata, which also houses a coffee-tree nursery, tasting room, interactive games and a media room that screens interviews with its agronomists.

Anthony Cottan, the director of PT Sari Coffee Indonesia (Starbucks Indonesia), said the store aimed to tell the Indonesian coffee story. He added that the location of Bali was chosen since it allowed for both large numbers of Indonesians, as well as foreigners to access the location in a relaxed atmosphere.

A popular destination, Bali welcomed 5.2 million foreign tourists from January to October 2018, a 6.5 percent increase from 4.9 million visitors recorded in the same period in 2017, according to data from I Gusti Ngurah Rai International Airport in Denpasar. It is also a top vacation spot for domestic tourists.

“If it’s rushed, it’s not going to work, they need to spend a little of time with us — half an hour to an hour — to kind of embrace what we’re doing,” Cottan said.

Additionally, Starbucks Dewata also features three specially curated beans only available at its store, from Bali, Sumatra and Priangan in West Java, on top to the selected limited beans at the Reserve bar.

Starbucks has over 370 stores across Indonesia, including nine other Reserve bars, which offer unique options to customers seeking an enhanced coffee experience, as they provide special coffee serving techniques and rare beans from across the globe to choose from.