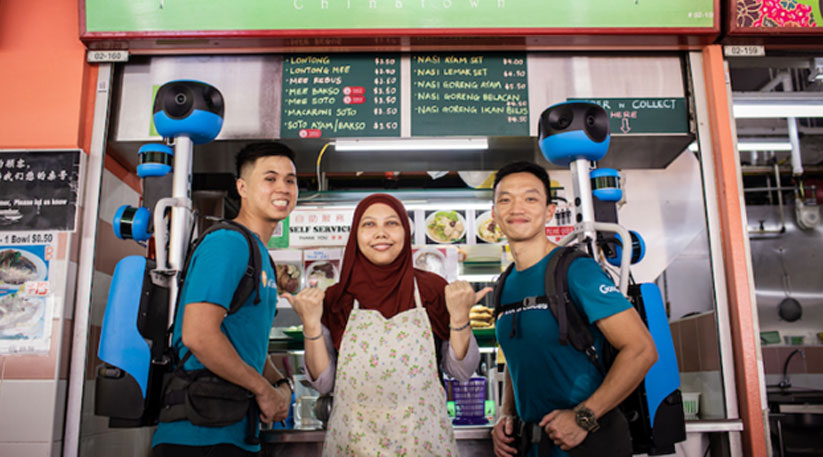 The Google Street View Trekker will be used to create a virtual map of the interior of Singapore’s 114 hawker centres, with each stall given its own location pin – Google

Hungry diners craving particular hawker fare will be given a much needed leg-up in their  search for their favourite stalls when Google rolls out a new Street View feature on its Maps app in early 2020.

When the Street View feature is completed, each stall will be given a separate virtual “pin” that shows its exact location within a hawker centre on Google Maps.

Furthermore, information about each stall will be available to users, including its name, stall number and photos which can be accessed through an online search on the app.

The company announced at a media event at Chinatown Market on Tuesday (July 30) that the move is part of its joint initiative with the National Heritage Board (NHB), National Environment Agency (NEA) and Federation of Merchants’ Associations, Singapore, to document the country’s hawker culture on Google Maps.

Google added that the organisations are co-driving the nomination to inscribe Singapore’s hawker culture on the Unesco Representative List of the Intangible Cultural Heritage of Humanity.

Programme manager of Street View Asia-Pacific – Amit Morya – said: “By documenting all 114 hawker centres, we hope to help more people get a glimpse into this fascinating part of Singapore’s culture and ultimately help bolster the local hawker’s businesses.”

NEA’s deputy CEO Khoo Seow Poh said the initiative will allow over 6,000 hawkers to have an online presence on a “widely used” platform.

He added that the agency will work with Google and key stakeholders to inform hawkers of the initiative and drive awareness of its benefits.

Google noted that the image collection effort will start from Chinatown Market and expand to other hawker centres such as Geylang Serai Market, Tekka Market, Maxwell Food Centre and Golden Mile Food Centre.

How does the Trekker work?

According to Google, the new cameras are able to capture images with a higher resolution as compared with older models, allowing for better image processing and higher quality images published to Google Maps.

Google operators will wear the Trekker which captures images of the surroundings as they move on foot inside the hawker centres.

The collection of images will then be consolidated to produce a complete map for users to browse through virtually.

Here’s a video showing a Google operator carrying the Trekker through the Chinatown Market hawker centre: