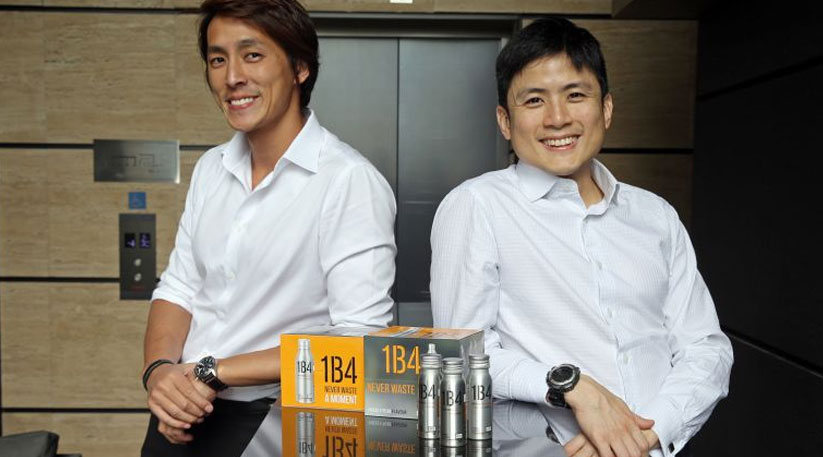 When they were working in Japan, Singaporeans Joe Lin and Damien Loh noticed that Japanese who went out for drinks took an antihangover drink called Ukon No Chikara or Ukon Power.

“It’s part of the lifestyle and culture there, where they stop by a convenience store and get one at the beginning of the night,” Mr Lin tells The Sunday Times.

The two friends, who do not work in the same company, caught on to the habit and found the drink so effective that they decided to distribute it in Singapore in 2011.

“It worked well for us and we were converts, so we wanted to bring it here, especially since there’s a big party culture here and in the rest of Asia,” says Mr Lin.

He and Mr Loh have since developed their own version of the drink that is meant to help the body recover from the effects of drinking alcohol.

Launched in November last year, the 80ml bottled drink is called 1B4 (pronounced “one before”) and is meant to be taken before drinking alcohol and again before going to bed after a night out. It can also be taken while consuming alcohol to help mitigate the after-effects of a hangover.

The key ingredient in the caffeine-free drink is curcumin, the active ingredient of turmeric, which is frequently cited by health journals and studies as having antioxidant and anti-inflammatory properties. It lends a bright neon yellow hue to the drink, which comes in a prickly pear flavour that is reminiscent of orange juice. Curcumin is also found in Ukon No Chikara and Ukon Power.

1B4 also contains vitamins C, B2, B6, B9 and B12, and claims to support a healthy liver, reduce tiredness and fatigue as well as boost the immune system. Mr Lin, 36, and Mr Loh, 37, have day jobs in the finance sector.

Mr Lin is in wealth management, while Mr Loh is in asset management.

Explaining why they decided to make their own product, Mr Lin says: “Ukon worked well here, but beyond a certain point, we decided we wanted more control of the product and to bring it to other places in the region such as Thailand, Hong Kong, Taiwan and Jakarta.”

They are no longer distributing Ukon, but there are other anti-hangover drinks available here.

They received a Capability Development Grant at the end of 2016 from Spring Singapore, an agency under the Ministry of Trade and Industry which helps Singapore enterprises grow.

Working with a United Statesbased Food and Drug Administration- approved laboratory, they spent two years developing 1B4, which included testing and getting approval from the Health Sciences Authority. About $80,000 was invested in the project. The drink is manufactured in Malaysia, with most of the ingredients from the US.

The active ingredient of curcumin is in nanoparticle form. “That means it’s ground up so fine that it’s at a molecular level, so your body is able to absorb it better and it’s much more effective than if you’d just taken powdered turmeric,” says Mr Loh.

In designing the packaging, they were also conscious of making the drink travel-friendly. The 80ml bottles can be stowed in carry-on bags for those taking short flights to party destinations in Asia such as Phuket and Bali.

While 1B4 is targeted at young working professionals in their 20s to 40s, Mr Lin and Mr Loh insist it is not just meant for those who want to mitigate the effects of a hangover. It can also be consumed as a daily liver supplement, they say.

The drink is also not just for those who party.

“It’s also for people who have to entertain for a living and still have to wake up the next day and bring their A game to work or a yoga class or spend time with the kids,” says Mr Lin.

He notes that 1B4 does not alter one’s drinking capacity or alcohol tolerance.

“Some people have asked us, ‘If you drink this, can you drink more?’ No, we’re not saying you can drink more or less, we’re saying you’ll get the same amount of intoxication.”

Anecdotally, the product has had about an 80 per cent effective rate with users, but Mr Lin and Mr Loh say its effectiveness varies according to factors like how much alcohol was consumed that night, what kinds of alcohol were consumed and whether the drinking was done on a full stomach or not.

1B4 was officially launched at the 2017 edition of It’s The Ship, a fourday, three-night music festival held aboard a cruise ship, in November. The cruise, which travelled from Singapore to Phuket and back, involved about 4,000 revellers from around the world and 24-hour partying.

The 1B4 team placed free sample bottles in every cabin and also sold 1,000 bottles on the ship.

Among those who tried it was Mr Ken Tilakaratna, 32, who is half-Japanese and familiar with anti-hangover drinks, such as Ukon and vitamin C tablets that remedy hangovers, from Japan. Mr Tilakaratna, who works in sales in the video games industry, says he is not a “strong drinker” and usually has to resort to eating a lot or drinking milk to line his stomach before heavy drinking.

“We drank a lot on day one and the alcohol we took included whisky, vodka, gin and champagne, and I knew I was going to get a hangover. So I took a bottle of 1B4 before and after partying and I woke up feeling normal the next day,” he says. “Usually, I would get headaches.”

He has since purchased an entire carton of 1B4 and tends to take it at the end of a night of drinking. “I’m glad this is in Singapore now so I don’t have to buy anti-hangover remedies from Japan the next time I go there,” he says.

But Mr Lin and Mr Loh intend to make it available to a wider market. They are in talks with distributors and hope to branch out to bars, restaurants, clubs and convenience stores eventually.