There are three types of omega fatty acids: omega–3, omega–6 and omega–9.

Omega 3 is the essential n-3 polyunsaturated fatty acid that cannot be made in the body and must be obtained from a diet. Alpha-linolenic (ALA), Eicosapentaenoic (EPA) and Docosahexaenoic (DHA) acids are the three most common omega 3 fatty acids found in foods. Omega-3 fatty acids can help lower the risk of chronic diseases such as heart disease, stroke and cancer as well as lower LDL or “bad” cholesterol (Rindfleisch, 2007).

Figure 1: The Structure of Omega 3

FDA
FDA has listed omega-3s on the Generally Regarded as Safe (GRAS) list, but recommended that consumers not exceed a total of 3 g of omega-3s per day, with no more than 2 g per day from dietary supplements.

ALA is an 18-carbon chain and three cis double bonds. The first double bond is located in the n-3 position or at the omega end of the fatty acid. ALA’ primarily functions as a precursor for the synthesis of EPA which in turn forms DHA but may also have an independent role in protection against coronary heart disease via different mechanisms. Conversion of ALA to EPA and DHA is limited and varies according to the intakes of other fatty acids (University of Colorado Colorado Springs, n. d.).

DHA plays an important role as a structural membrane lipid, particularly in nerve tissue and the retina, and can also act as a precursor to certain eicosanoids. Diets high in EPA and DHA help with brain and eye development, prevent cardiovascular disease, and can help to prevent Alzheimer’s disease. Fish oil and fatty fish such as salmon, mackerel, herring and tuna are the primary sources of EPA and DHA. Algae oils are a vegetarian source of DHA (University of Colorado Colorado Springs, n. d.).

Figure 2: The Structure of Omega 6

It is a carboxylic acid with an 18-carbon chain and two cis double bonds with the first double bond located at the sixth carbon from the omega end of the fatty acid.

It is a carboxylic acid with a 20-carbon chain and four cis-double bonds. It is used to synthesize regulatory molecules such as prostaglandins (hormone like chemical messengers) and thromboxanes (involved in platelet aggregation and blood clotting).

It is a carboxylic acid with an 18-carbon chain and three cis double bonds. It is an isomer of α-linolenic acid, which is a polyunsaturated n-3 (omega-3) fatty acid.

Omega 9 is the most common monosaturated fatty acid. It also known as oleic acid found predominately in olive, canola, nuts and sunflower oil. Its single double bond is located nine-carbons from the methyl end. Unlike Omega-3 and Omega-6 fatty acids, Omega-9 fatty acids are produced by the body (University of Colorado Colorado Springs, n. d.).

Figure 3: The Structure of Omega 9 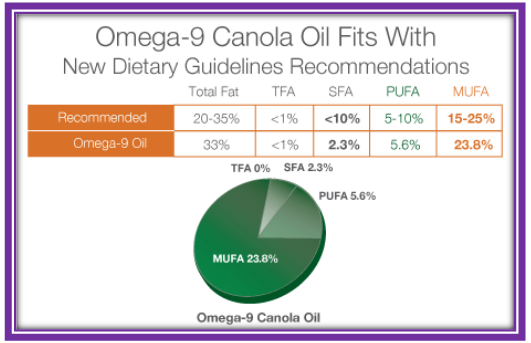