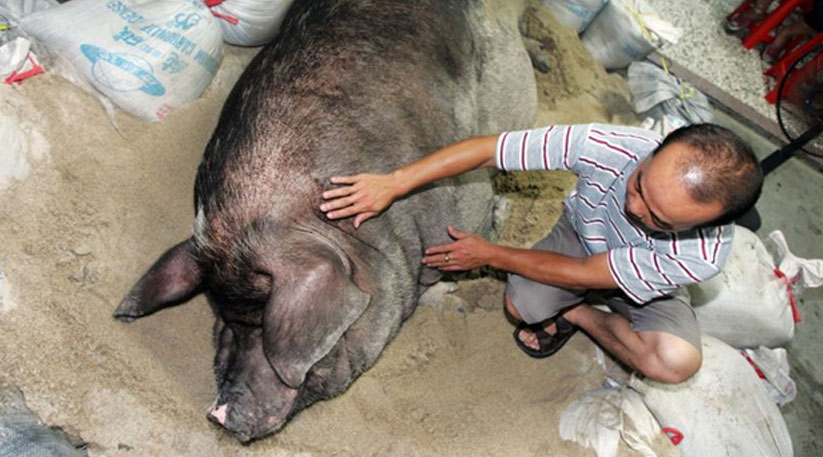 In a farm deep in the southern region of China lives a very big pig that’s as heavy as a polar bear. The 500 kilogram, or 1,102 pound, animal is part of a herd that’s being bred to become giant swine. At slaughter, some of the pigs can sell for more than 10,000 yuan ($1,399), over three times higher than the average monthly disposable income in Nanning, the capital of Guangxi province where Pang Cong, the farm’s owner, lives.

While Pang’s pigs may be an extreme example of the lengths farmers are going to fill China’s swelling pork shortage problem, the idea that bigger is better has been spreading across the country, home to the world’s most voracious consumers of the meat.

High pork prices in the northeastern province of Jilin are prompting farmers to raise pigs to reach an average weight of 175 kilograms to 200 kilograms, higher than the normal weight of 125 kilograms. They want to raise them “as big as possible,” said Zhao Hailin, a hog farmer in the region.

The average weight of pigs at slaughter at some large-scale farms has climbed to as much as 140 kilograms, compared with about 110 kilograms normally, Lin said. That could boost profits by more than 30%, he said.

The large swine are being bred during a desperate time for China. With African swine fever decimating the nation’s hog herd — in half, by some estimates — prices of pork have soared to record levels, leading the government to urge farmers to boost production to temper inflation. Wholesale pork prices in China have surged more than 70% this year, while pig inventories plunged 39% in August from a year earlier.

Chinese Vice Premier Hu Chunhua warned that the supply situation will be extremely severe through the first half of 2020. China will face pork shortages of 10 million tons this year, more than what’s available in global trade, meaning it need to increase production domestically, he said.

During a recent visit to major livestock provinces in Shandong, Hebei and Henan, Hu urged local goverments to resume pig production as soon as possible, with a target of returning to normal levels next year.

Still, many farmers are wary about restocking swine after being hurt by an earlier outbreak. Also, piglet and breeding sow prices have surged, making it more expensive for backyard farms to rebuild their herds. Increasing the size of pigs they already own may be the next best step.