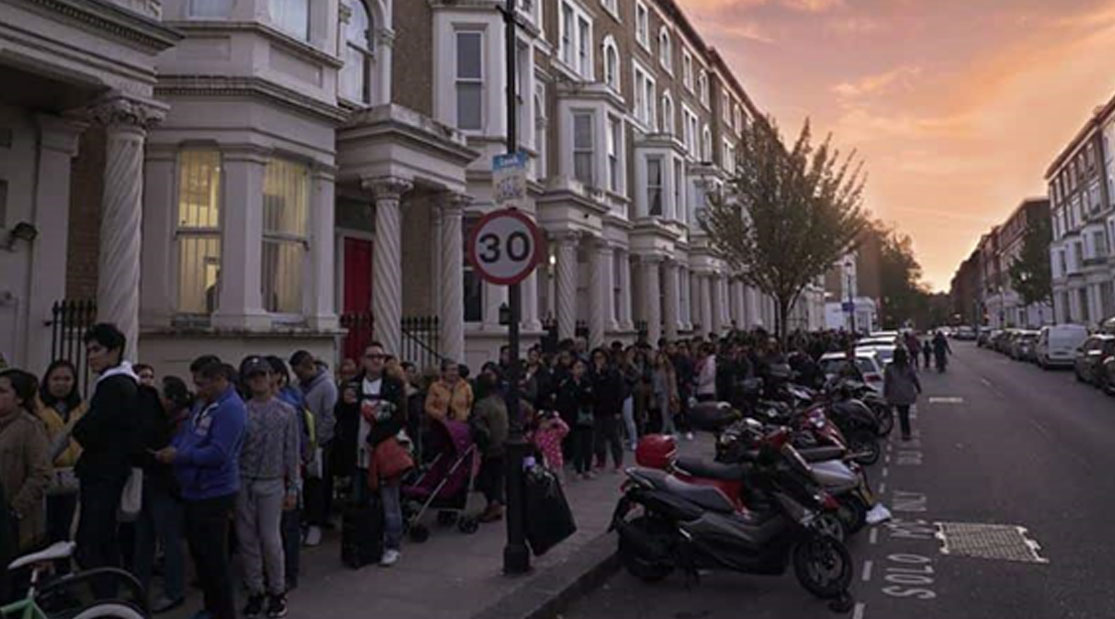 Jollibee serves fried chicken alongside spaghetti and meatballs, and has hardcore fans in the UK

It is crisp, yes. And golden – like the mane of a strong lion. It is also juicy and glistening, but not profoundly greasy, so it would serve a hangover as much as it would Friday lunch. It is fried chicken from the Philippines and last week people queued for 18 hours just to order rice and a bucket of legs.

Jollibee is a chicken shop. London already has loads of those, both upmarket and brilliant (Mother Clucker) and institutional (Morley’s). And yet you don’t see 1,000s of hopeful customers getting up at 3am for any other restaurant chain. One man waited an entire day to be the first in for Chicken Joy. “Jollibee’s arrival is definitely on par with the level of happiness when I graduated, got my first job, got engaged, got married, had my kids… this is huge,” said Mars El Brogy, 34, a Filipino living in London.

“Jollibee’s arrival is definitely on par with the level of happiness when I graduated, got my first job, got engaged, got married, had my kids… this is huge,” said Mars El Brogy, 34, a Filipino living in London.

This was last week. And yet the queues remain. They’re not as long, or as early, but they’re there. What is this place? Jollibee is a Philippines-based fast food restaurant with an expanding global reach. Of its 1,300 branches, most are in South East Asia, but there’s a growing presence in the Middle East, the US, and now Europe. The UK followed Italy. Chicken Joy has arrived and it is tender.

Amado Quindo, 40, has lived in London for 15 years and waited hours to taste his childhood. He said he and his family used to go to Jollibee after church back home.

“Jollibee is so important,” Mr Quindo said. “It’s more than just food – it’s our culture. We go on Sundays for lunch. It’s our roast dinner, so it’s truly special and something that binds us as a community. There’s a sense of nostalgia.

“The chicken is better than anywhere else too though. It’s not dry or oily. It’s fresh and moist. I bought two buckets after queuing – 16 pieces in total. My girlfriend was with me.

“It’s a really big deal to us [Filipinos] that a restaurant has opened in London. The food reminds me of my country and it’s a taste of home. I had Jollibee for dinner last night and for breakfast today. I think I’ll get it for lunch too.”

Precious Gestopa, 18, has lived in London since she was six, but remembers trips to her local Jollibee back in the Philippines. She and her friends have visited every day since London’s branch opened. She mentioned: “I waited about eight hours. I went with friends and we ordered eight Chicken Joy and 11 Yumburgers. It’s memorable, and reminds me of my childhood.

Bourdain “You can’t get anything like it in the UK. It’s not the same. And it really is part of us – it’s really important to me. My family are going to visit from Luton at the weekend and we’re going to visit.

Jollibee’s closest relation might be KFC, although when shops sprung up on the East Coast of the US it was dubbed the “McDonald’s of the Philippines”. The late chef Anthony Bourdain said Jollibee was “the wackiest, jolliest place on earth”. From Bourdain, that’s essentially advocacy.

On the menu isn’t just fried chicken, standard or chilli-coated: there’s Jolly Spaghetti for £3.49; a £2.69 rice dish with a beef pattie covered in mushroom gravy; a ball of mashed potato in gravy for £1.99.

The brand’s more curious spring rolls, which come with a mound of rice topped and a perfectly circular fried egg, or the Spicy Jolly Hotdog, the precise ingredients of which are unclear, aren’t available here.

But while limited, the menu is still odd for a UK market, and its cult-like draw and the camaraderie among guests would place it more in the Nando’s arena – food is guarded in much the same way as the chicken parmo in England’s North East.

Whether its newness is enough to attract the British, who for so long have played it safe when eating out, remains to be seen. Serving pasta next to battered chicken and buttered sweetcorn might take some convincing on high streets here.

There are at least a few British fans already. On launch night, Malcolm Conlan, 47, from Bromley, said: “I woke up at 1am especially and have been here since 3am. It’s a great atmosphere in the queue, people have travelled from all over the country to be here.”

Guildford balloon artist first in queue And Michael Sison, 38, a balloon artist from Guildford, was the very first through the door. He said: “I’m here because I miss Jollibee. It’s been almost nine years since I last visited.

“My daughter is seven years old and when I told her it was going to open here, it was her dream that I’d be the first person in the queue, and I wanted to make her dreams come true.”

Jollibee might work in the UK. London is only the second destination to launch in Europe – the first was in Milan. So don’t be surprised if you see Jollibee near you any time soon.