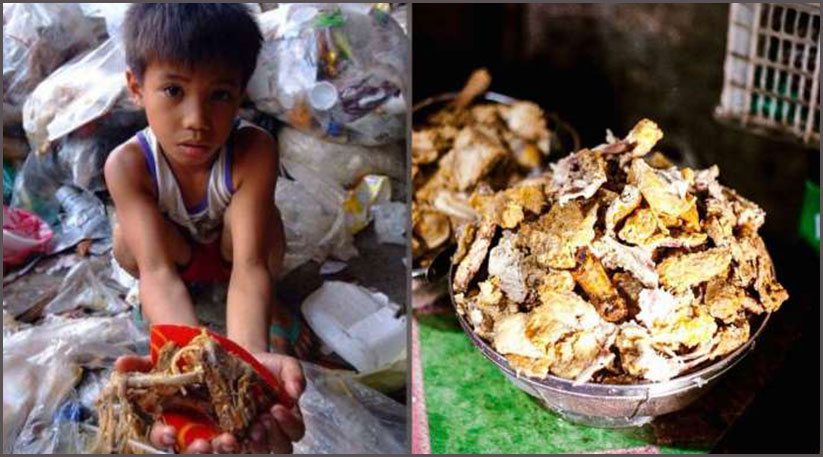 Life in the slums of Manila can be incredibly difficult, and putting food on the table every day is a big challenge.

That’s what makes “pagpag” so popular. This Tarong term usually refers to the dust one shakes out of clothing or carpets, but in the slums, it means meat picked out of the landfill, cleaned and recooked into cheap meals.

Pagpag has long been a staple of Filipino slum cuisine, but in recent years it has also become a lucrative business both for landfill scavengers and small restaurant owners who buy the discarded meat at cheap prices and recycle it into various dishes.

Scavengers who were previously only interested in recyclable metal and plastic now focus on leftover and expired food coming in from fast-food chains and supermarkets, scouring for it alongside feral cats and rats, packaging it in plastic bags and selling it for a small profit.

A bag of pagpag meat usually sells for about 20 pesos ($0.50) and is enough for slum restaurant owners to cook several servings of cheap dishes, which they, in turn, sell for around 10 pesos ($0.25).

But before re-cooking the meat, it’s first washed to remove any trash it might have come in contact with at the landfill, and the bones are removed. Then it is mixed with various sauces, vegetables and spices, and served to customers.

“With the kind of life we live, this helps a lot. When you buy a bag worth a few pesos, you can already feed one whole family,” one slum resident told Reuters.

Pagpag was once a last resort for most slum dwellers, something they would only eat on the worst of days, when they didn’t earn enough to afford a little rice, but with food inflation making it harder for people to afford first-hand food, pagpag has become the daily meal for many families.

Even though some of this recycled meat has literally been partially eaten by another person before being discarded, some pagpag eaters are convinced it’s safe to eat because it is washed before being recooked. Others even call it tasty and nutritious, but health authorities in the Philippines consider it a major health risk.

Sometimes discarded food is sprayed with disinfectant before being thrown away, and other times it becomes infested with dangerous pathogens like salmonella, for being kept in improper conditions for too long. And they don’t get much more improper than a landfill…

Salome Degollacion, an elder from the Helping Land slum, in Manila, told CNN that many have died from eating pagpag, but when you’re left with no other choice, I guess the risk is worth taking.

“It is a private humiliation of the poor to have to eat off someone else’s plate. But it’s a survival mechanism for the poorest of the poor,” said Melissa Alipalo, a social development specialist.

“They’re being pushed to do that thing because they don’t have enough money to buy the food that they should prepare,” Maria Theresa Sarmiento, manager of health and nutrition at Philippine Community Fund, adds.

With no real solution in sight, the popularity of pagpag can only go up, and with it, the risk of food poisoning and other life-threatening health conditions.

So the next time you think you have it tough, just imagine that there are people out there forced to eat recycled meat out of the landfill to survive.