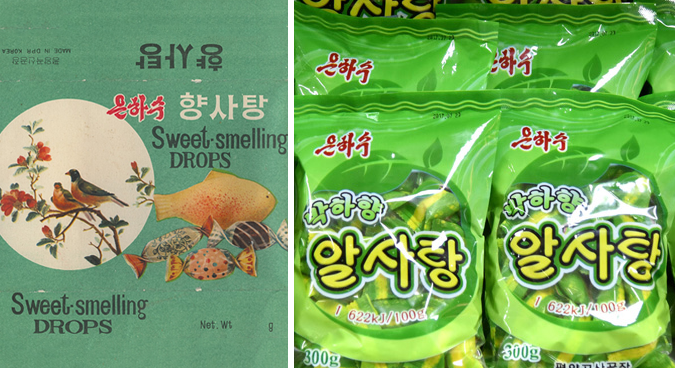 North Korean culture and society is sometimes regarded as stagnant, but even an examination of something as simple as the packaging of everyday items shows that Pyongyang, once determined to resist modernization, appears to be increasingly adopting foreign influence to market its growing consumer goods industry.

It’s all a far cry from the 1990s and 2000s, when packaging in the DPRK was mostly bland and functional in design.

KeumCup, for example, appears to have taken inspiration from a few snack packages from a well-known South Korean food company, Nongshim.

One shrimp-flavored snack, for instance, has similar packaging design to a South Korean counterpart – ranked second among the most popular ROK snacks in 2017.

With a similar combination of colors, design, and size, the resemblance is so close that consumers might find it hard to tell them apart.

Onion flavored chips (or rings) – another very popular snack among South Koreans – has been also mimicked by KeumCup, and the main color of the packaging and the fonts are very alike with South Korean packaging.

“I didn’t know that there were similar items in North Korea,” a source from Nongshim told NK News on the condition of anonymity.

“Since there have been no economic exchanges with North Korea, we know very little about the North Korean market and their products.”

“I think they combined the original color of onion and shrimp, white and red, respectively. It looks similar, but not exactly identical. The Japanese also use the same combination of colors for the same product,” they added.

Gum wrapping produced by the KeumCup Food Factory, too, also looks similar to that of South Korean cough drops that made by Lotte.

A video published by the Tokyo-based pro-Pyongyang newspaper Choson Sinbo reported that the KeumCup Food Factory began business back in 2011 but went through major changes after Kim Jong Un’s visit in January 2015, when he ordered its management to improve both the quality and diversity of their products.

Now the factory produces over 400 different food items, from gum to sports drinks and bread. In the report, Ri Jong Ho, CEO of KeumCup Food Factory, said that he had had the opportunity to travel around the world and applied what he saw during his trip into the business.

“Every time I went abroad for business, I would buy every product from snack shelves to taste and if I found something that the people in North Korea might like, I would get the recipe and study it,” Ri said.

As such, a push to modernize North Korea’s vintage-style approach to branding has emerged across a range of sectors.

“We care a lot about our packaging because even if a person is very good looking, the way how the person dresses makes a lot of difference in one’s appearance,” he said.

“We make trips to other developed countries… We study the quality of products and color from them, then receive example designs from National Industrial Art Center and Mansudae Creative Company and create our own designs that are more favorable to our people.”

Packaging is very important, the anchor continued, because it is all about “guiding” individuals to purchase products.

“Products’ packaging tells consumers what the product is, what it is for, and how it benefits to people’s health,” the anchor said.

“Thus, if every individual knows about this common knowledge of industrial art and raise social awareness on the subject, then our life would be even more civilized and shine.”

One regular visitor to Pyongyang sees this shift as part of a broader growth in consumerism and the development of a North Korean middle class.

“In the early 2000’s digital design arrived at the Industrial Design Studio in Pyongyang and together with digital printing heralded a change that basically brought the era of hand-drawn graphics to a close,” Nicholas Bonner, founder of Koryo Tours and author of a recent book about North Korean design, told NK News.

“The focus nowadays seems more on the allure of the packaging to fit the demands of a modern consumer class more interested in homogeneous ‘world’ design which implies a certain standard and kudos.”

“The economic changes in 2002 created a generation, particularly in Pyongyang, with the money to spend on new products,” Bonner explained.

“Coupled with a significant increase in imported goods (particularly from China) this competition meant that local brands had to improve both quality of product and modernize their packaging and design to remain relevant in this new market.”

But this change has been disrupted, to some extent, by economic sanctions, Bonner added.

“With the recent sanctions, the general public are back to buying basics but should the situation reverse this innate requirement for higher quality goods (not luxury but above basics) will return.”

And while state media reports products have become very popular among citizens in Pyongyang, recent North Korean defectors are not familiar with any of the new items.

“I haven’t seen any of them, but it seems that North Korea is trying to modernize, too,” said Hyunchul Kim, a defector who left North Korea in 2014. “I’ve seen products that were copied from China. In fact, they copied a lot of packages from other countries, so this doesn’t surprise me.”

“I’ve also seen TV ads about their locally made products on Mansudae TV.”

“I’ve seen none of these items when I was in North Korea,” said Yerim Ha, a teenage defector who came to South Korea in 2016.