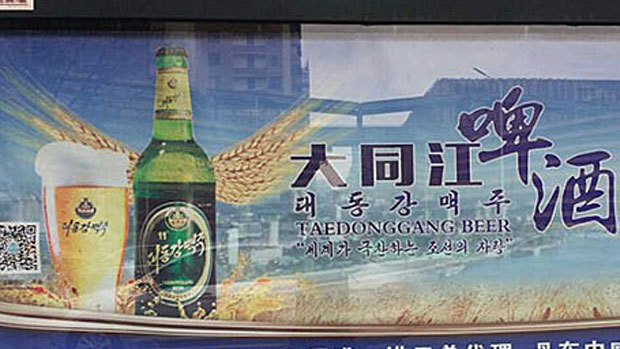 A popular North Korean beer banned under international sanctions for export outside the country is now being bottled in China and sold to restaurants as a smuggled product, sources living near the border say.

The Daedong River Beer now being bought in China is not a genuine North Korean product, but is a fake, a source living in the Chinese port city of Dandong, across the Yalu River from North Korea, told RFA’s Korean Service.

“Its bottle shape and label and even its taste are similar to genuine Daedong River Beer, but beer experts can distinguish the difference in taste,” RFA’s source said, speaking on condition of anonymity.

“But as its taste is very close to that of the genuine product, ordinary people can’t tell the difference,” the source said, adding that some believe the fake product is being brewed with special hops smuggled in from North Korea.

Daedong River Beer’s exclusive authorized dealer in Dandong is currently closed under international trade sanctions imposed to punish Pyongyang for its illicit nuclear weapons and missile tests, but restaurants that formerly carried the product are still selling the beer, the source said.

“And if someone points out that Daedong River Beer is a restricted item, the restaurant owners simply say it has been smuggled in from North Korea.”

The fake product now sold in Chinese restaurants is being brewed and bottled in “a secret collaboration carried out between North Korean and Chinese business partners,” a second source in Dandong said.

“In the area of Anmin on the way to Donggang city from Dandong, there is a food processing plant called Qing Liu,” the source said, also speaking on condition he not be named.

“It appears to be closed, but if you go inside, you will see a part of the facility that is secretly still running. This is the place where they produce the fake Daedong River Beer,” he said.