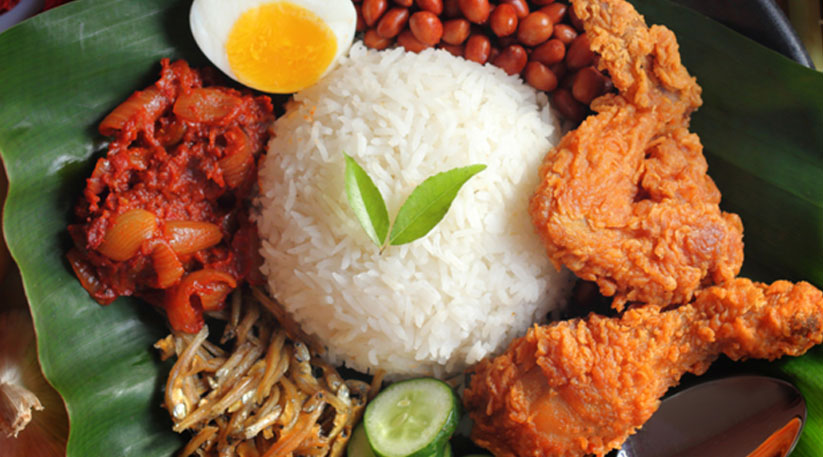 Although versions of nasi lemak can be found across South-East Asia, Malaysia claims this beloved street food classic as its own.

Ask any Malaysian why they love nasi lemak (“rich rice”), and you’ll instantly get a variety of responses. Many associate it with the comforting tastes and smells of their childhood, while others point to its amalgam of flavours and textures that underscore a good Malaysian meal: spicy, savoury, creamy, sweet, soft and crunchy. Malaysians themselves admit that nothing unites this multicultural nation better than their food, making nasi lemak not just part of their cuisine, but part of their common identity.

“This is the first Malay dish my immigrant mother [from India] learned to cook,” said Nages Sieslack, a first-generation Malaysian. “It is simple, yet unique. You can have or serve it any time of the day, and you can never go wrong.”

Malaysia’s quintessential nasi lemak bungkus (“wrapped”), served at roadside stalls or food trucks, consists of rice steamed in coconut milk and aromatic pandan leaves, served with a fiery sambal (chilli paste), fried peanuts and anchovies, sliced cucumber and a halved hard-boiled egg. This is tightly wrapped into a pyramid shape in a double layer of banana leaf and old newspaper or brown wax paper. Patrons can also choose from an assortment of side dishes like beef rendang (non-crispy, indubitably), spiced fried chicken or assorted seafood sides.

Although commonly eaten for breakfast, nasi lemak’s 24/7 availability makes it a go-to meal during the day as well as a post-clubbing snack, with some claiming it’s a good cure for hangovers. A common sight in most towns or cities is Malaysians of all stripes seated at foldable Formica tables on “five-foot ways” (covered walkways in front of shops) getting their nasi lemak fix.

While the origins of nasi lemak are difficult to pinpoint, it has long been part of Malay food culture in Peninsular Malaysia, mentioned in 1909 in The Circumstances of Malay Life, written by British scholar and Malaya expert Sir Richard Olaf Winstedt, who detailed how Malay farmers and fishermen cooked rice in coconut milk as well as the different condiments they ate it with.

But nasi lemak is still mostly associated with Malaysia (and by default Singapore, since Singapore was part of the country from 1963 to 1965), where it has evolved to become a street food classic and national staple beloved and championed by locals.

“Older generations of Malaysians can’t remember a time when there wasn’t nasi lemak,” said food historian Ahmad Najib Ariffin, founder of the Nusantara Academy of Development, Geocultures & Ethnolinguistics that focuses on culture, tradition and heritage in South-East Asia. “Pretty much everyone [in Malaysia] says that ‘Yes, we’ve had nasi lemak, like, forever’. And they say that even their own grandparents had nasi lemak too. That shows you that it is a part of Malaysian food history. It’s been around for so long, it [has] permeated everywhere in Peninsula Malaysia.

Recent years have seen some bizarre innovations of the beloved dish. Nasi lemak-inspired curry puffs, ice cream, chocolate and even condoms have all had their run. Suffice it to say, reactions from purists tend to be variations of, “No, just no”.

Perhaps the choicest words were reserved for the Malaysian who dreamed up a rather unusual variation and dared share it on Twitter: nasi lemak topped with melted grated cheese. One response put it succinctly: “There’s a special place in hell for those who mix nasi lemak with cheese.”

“The only limit today is the imagination,” Ariffin said. “I have to admit that some of [the innovations] are outlandish. You couldn’t claim ice cream or chocolates as nasi lemak in the traditional sense. However, I appreciate innovation. And whenever I see something like that, I do pay good money to try them. That is why those are usually trendy things – not permanent products.”

While most locals view these spins on the original with bemusement, their outrage is reserved for when Singapore tries to get a piece of the nasi lemak action. Although Malaysians acknowledge the interconnected food history among South-East Asian – and specifically Nusantara (Malay diaspora) – nations, they’re not often as magnanimous with the little red dot down south.

Squabbling over food is almost a national pastime for Singapore and Malaysia, two food-loving nations that were once a single political entity. Tug-of-wars over chilli crab, Hainanese chicken rice and cendol or rendang (with Indonesia occasionally making it a three-cornered fight) have occurred repeatedly over the years. And the long-simmering distaste for Singapore being given or claiming credit for “Malaysian-origin” dishes occasionally boils over, resulting in impassioned social media spats.

Nasi lemak is the dish currently in the firing line, with new versions usually being unveiled around the time of both countries’ Independence Day celebrations in August.

In 2017, to commemorate Singapore’s National Day on 9 August, McDonald’s Singapore unveiled the Nasi Lemak Burger: a coconut-flavoured chicken thigh patty, fried egg, caramelised onions and cucumber slices topped with sambal sauce served between semolina buns, which some Malaysians saw as an appropriation of “their” dish.

Egged on by their countrymen, Malaysian burger joint myBurgerLab created the Nasi Lemak Ayam Rendang burger to commemorate Malaysia’s own Independence Day on 31 August 2017. A provocative tweet prior to its launch featured a picture of the burger in front of a Malaysian flag with the text: “Dear Singapore, nice try, but …”. Some Singaporeans retorted, “Copycats”; while others wryly remarked that Malaysia’s issue should be with McDonalds rather than Singapore. The burger became such a hit that what was originally a temporary special became part of the regular myBurgerLab menu.

Then in August 2018, when Singapore nominated its hawker culture (comprising more than 100 indoor communal dining spaces where chefs serve multicultural food – including nasi lemak) for Unesco listing, hackles were raised across the causeway, with Malaysian celebrity chef Redzuawan Ismail (better known as Chef Wan) branding the nomination “arrogant”, and adding that “people who lack confidence in their food will go all out to do these things for recognition.”

Malaysians were once again miffed this year, when streaming giant Netflix, passed up their eclectic cuisine to feature Singapore instead in its Street Food (Asia) series. In response, a local Malaysian radio station teamed up with Nazrudin Habibur Rahman, the host of long-running local food show Jalan-Jalan Cari Makan (“Scouting Around For Food”). Using the hashtag #BersatuForMakan (#UniteForFood), they lobbied for a street food video they produced ­– which included the famous Nasi Lemak Tanglin stall in Kuala Lumpur – to be featured in the Netflix series.

But is nasi lemak unequivocally “Malaysian”? Given scant food history records in this region, no-one can say for sure.

Najib contends that while rice cooked in coconut milk isn’t itself unique to Malaysia, the type of nasi lemak served here, with its particular constellation of condiments, is uniquely Malaysian. “You do not have this type of nasi lemak in other parts of South-East Asia,” he said.

Others are slightly more circumspect about laying sole claim to a dish with close cousins – albeit with tweaks in ingredients, condiments and taste – around South-East Asia.

“I cannot comment if nasi lemak is in the history books of Malaysia. But we can say that wherever there are Malays, nasi lemak is common food like in Malaysia, Indonesia, Brunei and Singapore,” said Mohammad Nazri Samsuddin, third-generation manager of Nasi Lemak Wanjo in Kuala Lumpur, who serves up nasi lemak with sides like sambal squid and retains Malay traditions like steaming the rice in specially manufactured wood steamers.

“Nasi lemak is a Nusantara favourite! So many names, so many variations across geography and culture, it would be almost blasphemous [to claim it as solely Malaysian]. If we ever do, be prepared for the next crescendo of ‘Ganyang Malingsia’ [a term coined by Indonesians referring to what they claim as Malaysia’s appropriation of their culture] from across the Malacca Straits!” Rahman joked.

Ariffin agrees. Given that the Malay Archipelago has witnessed a history of cross-influence, cross-migration and intermarriage, he believes it would be disingenuous for any one country to claim first dibs on a dish that predates present national boundaries.

“We forget that Singapore and Malaysia are like brother and sister. I always like to mention that we had a common parent. If parents bequeathed to their children the same recipe, no sibling can say that this is only mine,” said Ariffin, who has family on both sides of the causeway.

Perhaps ultimately, it may not be about where a dish originated, but who has the best marketing chops.

Where we’ve been second best, admittedly, is capitalising on our unique melting pot. Slick marketing was the winner for Singapore. From poaching the right opportunities in producing global content (ie, Netflix) to poaching the ‘right’ exposure on a global platform (ie, Crazy Rich Asians), I take my hat off to our neighbours. That is something we can learn from them,” Rahman said.

Yet, Rahman sees ample potential in Malaysian fare getting its fair share of plaudits. “We must produce and tell our own stories. Good stories that reflect our culture, through our cuisine. If we don’t tell our stories, who will? Singapore, that’s who,” he said.

And maybe Malaysia will yet have the final word on nesi lemak.

In conjunction with Independence Day on 31 August this year, McDonalds Malaysia brought what could be the parting shot to the debate. A cheeky YouTube ad with the tagline “Nothing comes between Malaysians and their nasi lemak”, implied that the fast food giant’s own nasi lemak bested even the best that Singapore could offer. Then, to mark Malaysia Day on 16 September, the company initiated a change.org petition to collect 100,000 signatures to have nasi lemak declared Malaysia’s national dish. (They didn’t hit their target.)

“It was something that McDonald’s Malaysia wanted to do for our fellow rakyat (citizens), because, while we have recognised the popularity of nasi lemak amongst Malaysians, it still remains a mystery why Malaysia has yet to have a national dish,” said Melati Abdul Hai, vice president and chief marketing officer of McDonald’s Malaysia.

She denied, however, that this was a marketing gimmick to cash in on the “food wars”, explaining that Malaysians have been, and will always be, passionate about their food, and that at the core, food should bring people together.

“In a way I commend them for trying to make something ‘unofficial’, official. On the other hand, I also think it might antagonise Singapore… maybe,” Ariffin said.

Malaysians themselves admit that nothing unites them better than their rich cuisine. Perhaps it’s because food might be one of the few remaining identity markers left untainted in this melting pot, where discord is often stirred by the politicising of ethnic and religious differences.

Ultimately, one could argue that nasi lemak is not just a simple rice dish. It’s a shared national identity. And sometimes that is territory best left untouched.