Indos & Instant Noodles: A Love Story like No Other 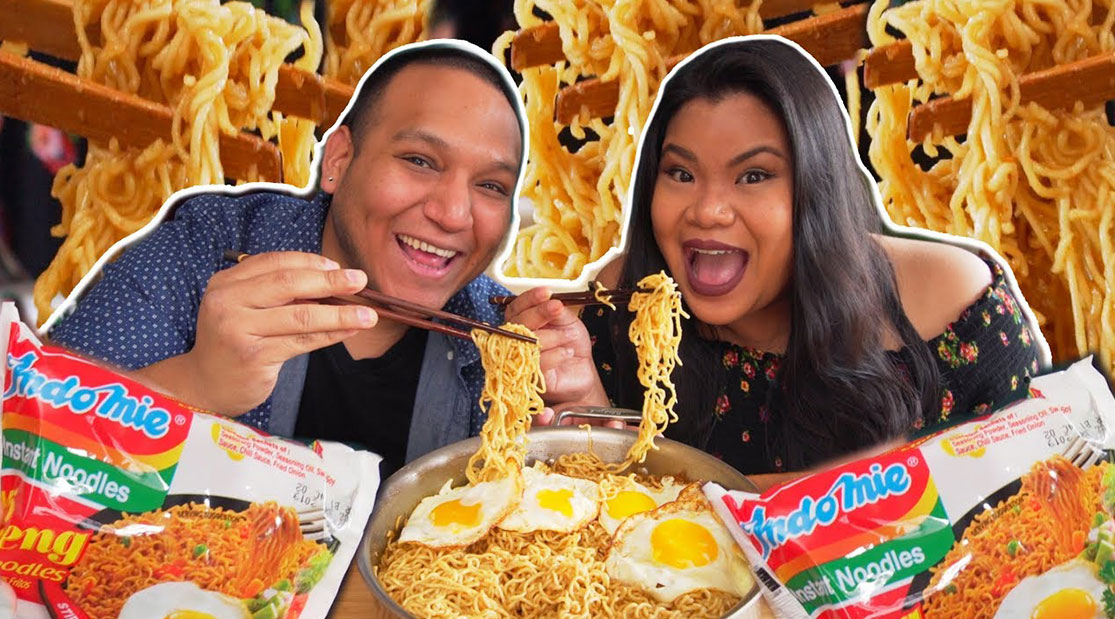 Since its introduction to the Indonesian public in 1968 with the brand “Supermie”, instant noodles have slowly but surely become a significant part of the Indonesian diet. It has been categorized as comfort food, even marketed as an occasional replacement for daily breakfast, lunch or dinner.

The word “instant” no longer accurately applies in “emergency cases” such as when time or resources are limited.

The easy preparation method and variety of flavors carefully tailored to suit the average Indonesian palate have put instant noodles as a priority product to be packed when traveling, as well for stocking up at home. As noodles are in the carbohydrate family, they are also often used as a rice substitute as they pair well with vegetables and proteins such as eggs, corned beef and meatballs.

“People love the ‘toasted smoky’ aroma of instant noodles,” he said. William also included economic value and MSG content among the food’s popularity factors, saying, “They are cheap and full of MSG.”

MSG, also known as monosodium glutamate, is naturally found in certain foods such as seaweed, soy sauce, Parmesan cheese and tomatoes, and is associated with the unique savory flavor umami. According to the American Society for Nutrition, MSG has been shown to increase satiety when combined with protein, which also explains why instant noodles have become a choice comfort food.

At least 20 instant noodle companies, from big to small scale, are currently competing for the public’s attention with their various flavors and creativity, with Indofood, Wings Food, Conscience Food, ABC, PT Jakarana Tama, Nissin and Delifood thriving in the top seven.

Although food giant Indofood still leads the market with 72 percent of the market share, other companies with various instant noodle brands — though some may not be so easy to find in your nearby minimarkets or grocery stores — can be found creatively spoiling Indonesian consumers’ palate with their bold flavors and unique offerings.

From innovating a premium instant noodle that comes with real chicken meat and mushroom, introduced by PT Mayora Indah’s Bakmi Mewah in 2016, to the latest from PT Fit Indonesia Tama, Fit Mee, a low-calorie instant noodle that focuses its initial sales through e-commerce, these brands persistently attempt to lure fans of the food away from their preferred brand to discover new tastes that they may actually like even more.

“We always research what kind of flavors Indonesians like, then we develop (our product) from there,” Wings Food marketing manager for noodle and cooking oil, Yolanda Djaja Sastra, recently told The Jakarta Post. Creating an innovative product that has full-bodied flavor is what the company strives for.

“Also, our curry flavor is quite thick, allowing consumers to have the experience of eating real curry”

“Indonesians like to eat ayam kremes (fried chicken with crunchy bits) for its kremes, or fried rice with kerupuk (crackers). They really love to have that kind of experience in their mouth, which is exactly what we’re trying to offer.”

Meanwhile, spicy flavors have been one of the focuses of PT ABC President Indonesia with its Mie ABC Selera Pedas (spicy taste) and PT Jakarana Tama to stay afloat in the instant noodle game.

“Some called Mie Gaga Xtra Pedas (extra spicy) the Samyang of Indonesia. The fact is we actually planned to release this product in 2011; however, we felt it was not the right time because of some considerations,” said PT Jakarana Tama director Mulyadi Djaja.

Buldak refers to grilled chicken marinated in super-spicy red chili paste — its name translates to “fire chicken”. All this super spiciness became widely exposed through YouTube channels, where the YouTubers taped themselves or other people eating Buldak Chicken Ramen. The highlight is simply the noodle eaters’ reaction to the spiciness.

By 2016, Buldak ramen fever had hit the Southeast Asian market, and Samyang forayed into Indonesian market. In order to increase sales, the company also sought halal certification from the Indonesian Ulema Council (MUI), which they finally got in September last year.

“That’s why we chose to launch the jalapeno flavor. Because (the big brands) already have soto, kari (curry) and ayam bawang (chicken onion) flavors. We don’t want to release the same products; hence, we offer many unique flavors — which has its plus and minus points, since something new isn’t necessarily welcome.”

Being a small company indeed makes efforts to innovate easier, said Mulyadi, including thinking up healthier options for consumers.

“We always try to think out of the box. One of our most revolutionary products is Healtimie, which is high in fiber and doesn’t undergo a frying process like regular instant noodles,” he said.

“When we launched it around 2003, we didn’t intend to make the product (this good). We know that it has zero transfat, but that’s about it. But later on our customers reached out to us and said they lost weight after eating it. And we’re like, ‘seriously?’ One woman even said she lost up to 5 kilograms in one week.”

Mulyadi himself, along with the other members of his team, later tried consuming the instant noodles every day as a carbohydrate replacement. “I’m a living proof,” he claimed, adding that he lost nearly 10 kg in three months.

However, being a small company has its disadvantages, such as lack of marketing budget. “We may have this outstanding and innovative product, but we lack the power to let people know about it,” said Mulyadi.

“Indonesian people still care about brand; upon entering a store, they will immediately look for (well-known instant noodle) brands,” he said. “But if you have a blind test, where we put perhaps four instant noodles from different brands and you are asked which one is better, you’ll be amazed with the result,” adding that his product would definitely win over the majority player.

The market has also started to recognize Lemonilo instant noodles with fried noodle flavor, which claims to be the healthier option for instant noodles. According to a statement released by the manufacturer, Lemonilo instant noodles are made of natural ingredients without added preservatives, coloring or additives. With ingredients sourced from local producers classified as small and medium enterprises (SMEs) from across Indonesia, the brand further empowers their SME partners by having the products manufactured at the latter’s facility and conducts several stages of quality control to ensure consumers receive the best products.

“I took out the dominant MSG profile, and put the spices in front,” said William regarding the instant noodle flavors he created.

Alongside the ongoing trend, locally sourced ingredients and distinctive flavors are other alternative directions preferred by some culinary entrepreneurs. Santhi Serad, founder of the Aku Cinta Makanan Indonesia (I Love Indonesian Food/ACMI) movement, told the Post that in some SME bazaars she often visits in many Indonesian cities, she finds many home industry instant noodle brands.

“Many small entrepreneurs produce instant noodles made of local natural ingredients. They often use plant-based coloring such as carrots and spinach, and they also develop instant noodle base from sago starch, which comes from local Indonesian plants,” said Santhi.

Warunk Upnormal, a brand that has come to be synonymous with instant noodle cafés, even seems to be encouraging its customers to stay as long as they can by providing numerous electrical sockets and games such as Uno and Monopoly.

Founded in 2014, the premise’s concept was said to be an upgrade of a coffee shop, whether in variety, quality as well as atmosphere. “As the café’s founders liked to hang out, they started innovating and decided to found Warunk Upnormal as a place where they’d love to spend time,” said Bunga Prima, media relations of PT Cita Rasa Prima Indonesia Berjaya or CPR Group, which holds Warunk Upnormal’s brand.

If the attraction is translated into its outlet numbers, Warunk Upnormal has grown to more than 75 outlets in over 30 cities in Indonesia in under four years. Bunga added, “The number is still increasing.” Its active franchising contributes to the company’s growth. “We aim to build this local brand into an international one. By collaborating with partners, we are building an even more extensive brand,” said Bunga.

The success of Warunk Upnormal has inspired other culinary entrepreneurs to follow in its footsteps and build instant noodle-serving cafés of their own. Akademie in Bendungan Hilir area, Central Jakarta, is one of them.

Eric Widyan Susanto, owner of Akademie, said through the café, he aims to present a good-food restaurant in a less expensive version, instead of a more expensive version of warung. That is why although instant noodles remain the base of the menu, in Akademie it is completed with good sources of protein such as dory fish and black pepper beef, vegetables and other fresh ingredients. Similar to Warunk Upnormal, Akademie also has long operational hours, provides electrical sockets, free Wi-fi and catchy interior decoration.

While we have already mentioned that Indonesia’s instant noodle consumption is the second-highest in the world, the country is also recognized as a global instant noodles manufacturer whose products are available in foreign markets such as the United States, Europe, the Middle East and Africa.

The popularity of Indonesian flavors brought by the instant noodles is also evident in eating shows, popularly known as mukbang, scattered across YouTube. The craze that started in South Korea features many types of instant noodles, Indonesian brands included.

One of the most popular mukbang hosts, Hyunee, who at the time of writing has 814,569 subscribers and has featured Indonesian instant noodles, has uploaded three videos where she sampled and plowed through five varieties of fried noodles.

In an e-mail interview with the Post, Hyunee, who resides in the US, said she found out about a particular Indonesian instant noodle brand through one of her Indonesian viewers, who sent different flavored of Indonesian noodles for her to try.

Hyunee, who calls herself a full-time mukbang content creator, said the taste was unique. “They are more dry and full of flavor compared to other noodles. I think the best combination is topping the noodle with an egg,” she added.

Flavor is still the main factor of every instant noodle type produced. Flavors that are targeted for the Indonesian palate have been well received by the international community. While Indonesia strives for the world to shine brighter lights on its culinary wealth, instant noodles bring more than just hope: They put Indonesia in the global spotlight.