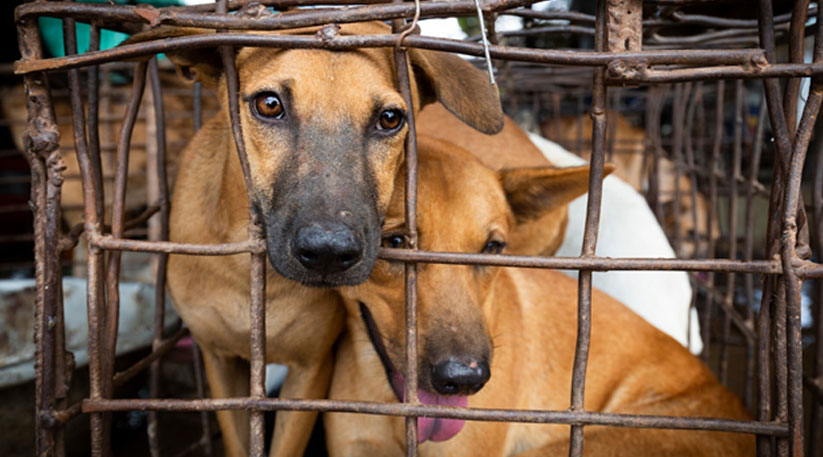 Officials in Indonesia have pledged to end the nation’s dog meat trade, a move which will save up to 2,000 dogs from slaughter and human consumption per month.

The regency of Karanganyar in Java pledged the action following a shocking investigation by Dog Meat Free Indonesia (DMFI), which uncovered evidence of dogs being bludgeoned and blow-torched alive in animal markets.

The victory has been welcomed by Ricky Gervais and actor Peter Egan, both of whom are celebrity ambassadors for DMFI and who thanked the head of district, Bupati Juliyatmono, for his role in the pledge.

The plan to end the horrifying trade includes closing every stall selling dog meat in the regency, as well as the creation of alternative livelihoods for those currently reliant on income from trading in dog meat.

Investigations by DMFI – a coalition between several animal protection organisations such as Change For Animals Foundation and Humane Society International – showed dogs being beaten and strung upside down to bleed out, all the while still conscious and in full view of other terrified dogs.

Campaigners are hopeful this new pledge will mark the start of a nationwide movement to tackle this dangerous and illegal trade, although they say the governor of North Sulawesi, Olly Dondokambey, refuses to act.

The province of North Sulawesi is currently central to dog and cat meat trade activity, with approximately 200 ‘extreme’ animal markets operating each day.

Although dog meat is only consumed by seven per cent of Indonesia’s entire population, the trade remains a significant threat to public health – particularly with regards to the transmission of rabies.

Rabies, a viral, and potentially fatal, disease that infects the central nervous system is a serious threat worldwide with 55,000 deaths per year – more than 50 per cent of which are in Asia, according to the Food and Agriculture Organization of the United Nations (FAO).

Currently, 24 provinces in Indonesia are Rabies endemic, with those with the greatest demand for dog meat among those with the highest prevalence of the disease. According to DMFI, the North Sulawesi Province has some of the highest numbers of human deaths attributed to rabies in the country.

Despite the lack of action in North Sulawesi, the progress being made in Karanganyar and Yogyakarta is enough to give DMFI campaigners cause for hope.

In Karanganyar, every one of the estimated thirty dog meat-selling stalls throughout the regency will be closed, with the local government already hosting a meeting with the traders to announce the ban and to discuss alternative livelihood opportunities.

The Yogyakarta Provincial Government separately drafted a Mayor’s Regulation for approval, through which a ban on dog meat would be implemented.