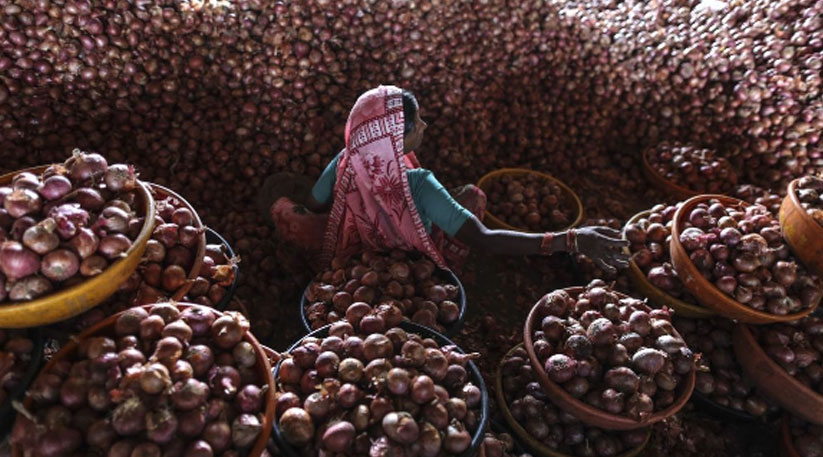 From Kathmandu to Colombo, a kitchen nightmare has taken root: onion prices have gone crazy.

That’s because India, the world’s biggest seller of the Asian diet staple, has banned exports after extended monsoon downpours delayed harvests and supplies shrivelled. And dedicated buyers across the region, like Nepalese housewife Seema Pokharel, are flummoxed.

“This is a terrible increase,” said Pokharel, out shopping for vegetables in Kathmandu, Nepal. “Onion prices have more than doubled in the last month alone.”

Whether it is Pakistani chicken curry, Bangladeshi biryani or Indian sambar, Asian consumers have developed a serious dependence on Indian onion supplies for go-to dishes. Shorter shipment times than from rival exporters such as China or Egypt play a crucial role in preserving the taste of the perishable commodity.

But last Sunday, New Delhi banned all exports from India after local prices jumped to 4,500 rupees ($63.30) per 100kg (220.5lbs), their highest in nearly six years, due to the delay in summer-sown crop arrivals triggered by longer, heavier rains than usual.

Since the ban, countries such as Bangladesh have turned to the likes of Myanmar, Egypt, Turkey and China to increase supplies in a bid to bring prices down, government officials and traders said.

But the hefty volumes lost will be hard to replace.

India exported 2.2 million tonnes of fresh onions in the 2018/19 fiscal year ended March 31, according to data from India’s Agricultural and Processed Food Products Export Development Authority. That is more than half of all imports by Asian countries, traders estimate.

Rising prices of alternative supplies will add to the headache for importers trying to get the vegetable from elsewhere, said Mohammad Idris, a trader based in Dhaka. In the Bangladesh capital, consumers are now being asked to pay 120 taka ($1.42) per kilogramme (64 cents per pound) for their prized onions – twice the price two weeks ago and the highest since December 2013.

“Prices are going up elsewhere in Asia and Europe,” said Idris. “Other exporting countries are taking advantage of the Indian ban” to raise their asking price.

In response to the crisis, the government of Bangladesh has initiated sales of subsidised onions through the state-run Trading Corporation of Bangladesh (TCB).

“We are looking for all possible options to import onions. Our target is to import in the shortest possible time,” said TCB spokesman Humayun Kabir.

But the shipments from elsewhere – Iran and Turkey are also potential suppliers – that authorities in countries across the region are investigating will all take time.

“It takes one month when it comes from Egypt and about 25 days from China, while it takes only a few days from India,” said Dhaka trader Idris.

The need for alternative imports is so severe, though, that countries like Sri Lanka have already placed orders with Egypt and China, said G Rajendran, president of the Essential Food Commodities Importers and Traders Association.

For other countries, there may be little option but to sit tight and hope for the best.

Malaysia, the second-biggest buyer of Indian onions, expects the ban to be temporary and sees no reason to panic, said Sim Tze Tzin, deputy minister of agriculture.

But even India has been importing onions from Egypt to calm prices. And there will not be any meaningful drop in prices before summer-sown crops start to hit the market, said Ajit Shah, president of the Mumbai-based Onion Exporters’ Association.

That is not expected until mid-November, meaning the export ban is not going away in the near term.

“India could resume exports once prices drop, but it will take time,” said Shah. “Until India resumes exports, supplies will remain limited in Asia.”

For now, consumers like Kathmandu shopper Pokharel are having to change habits across Asia.

“I went to buy 5kg (11lbs) of onions for our five-member family but ended up buying only 3kg (6.6lbs) due to higher prices,” said Afroza Mimi, a Dhaka housewife on a shopping expedition the day after India imposed the export ban.

“They (traders) are selling old stock nearly at double the price. This is crazy.”