Working out the kinks in organic farms 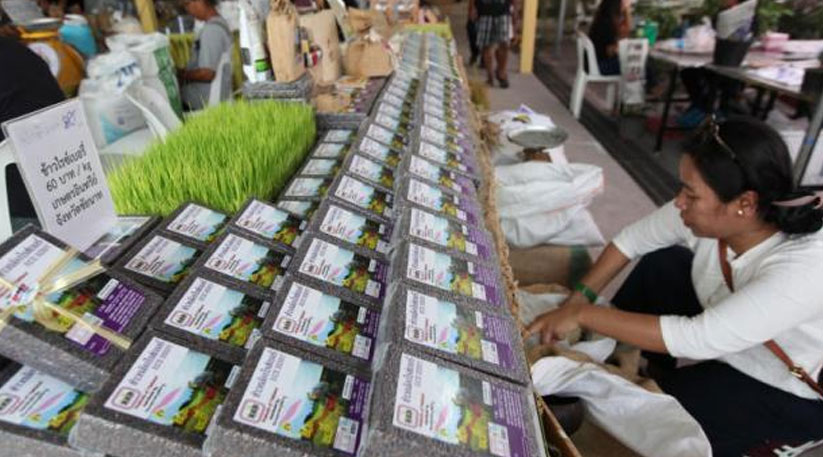 Demand for organic products has flourished as consumers become increasingly concerned about what they eat.

Agriculture is the backbone of Thailand, with most of the population still relying on the sector for their livelihood. Thailand is a top exporter of several agricultural products, thanks to its favourable climate.

Thai governments have also been committed to promoting organic farming here the past several years. But development seems to be face numerous stumbling blocks.

Peerachote Charanwong, chairman of the Thai Organic Trade Association, said the main obstacle is the lack of a clear working policy among state agencies, notably the Agriculture and Cooperatives, Commerce, and Industry ministries.

For example, while the government has vowed to promote organic farming, the Agriculture and Cooperatives Ministry, which is in charge of farm development, came up with a contradictory policy by promoting innovative products like genetically modified organisms.

“The Agriculture Ministry first needs to have a clear policy towards developing organic farming,” Mr Peerachote said. “The ministry introduced the Organic Thailand label to certify organic farming standards in 2012, handled by the Agriculture Department, but the monitoring and supervisory process after farmers have been awarded certification is quite poor.”

In addition to the Agriculture Department, another organisation within the Agriculture Ministry offers similar certifications: the National Bureau of Agricultural Commodity and Food Standards, which awards the Q-Mark quality certificate.

Mr Peerachote said this leads to confusion among consumers, as each organisation promotes its own quality certificate.

“Farmers themselves have to thoroughly understand that being certified by Organic Thailand is not the stamp of successful organic production,” he said. “In fact, it’s just the beginning of a huge responsibility to consumers, for which they have to maintain their production standards further, as the monitoring process is very poor.”

Organic farmland in Thailand spans about 280,000 rai, a significant increase from only 80,000 rai five years ago.

Mr Peerachote said the government doesn’t need to set up a new quality standard or certificate if it wants to seriously implement organic farming development in the country; it just needs to monitor, evaluate and support organic farmers in the first 2-3 years of the transition into organic farming, as farmers face setbacks in the form of subdued income and a steep learning curve.

An owner of C.K. Industry (2000) Co, a grower and producer of organic mulberry tea, said organic farming in Thailand is tough, as most adjacent farmland still uses chemicals.

The company itself has invested a lot to establish windbreaks to mitigate pesticide drift to its plantations in Kanchanaburi province.

“I don’t understand why organic farmers have to spend more,” said the owner, who asked not to be named. “In Thailand, the quality product makers have to invest more than those who produce food that uses chemicals.”

According to the owner, the company tried to convince adjacent farmers to grow organic tea and supply it to the company, but later found that most farmers continued to use chemicals such as grass and weed killers.

“In our experience, we think the key problem in organic farming is trust,” the owner said. We couldn’t even trust the farmers we were cooperating with. We have to run our tea plantations alone.”

C.K. Industry has produced organic mulberry tea from its own plantations on 150 rai for 16-17 years. Every mulberry tree, including other ingredients such as jasmine, rose, butterfly pea, pandan, lemon grass, black rice are certified as organic and subject to regular inspection.

The company produces about three tonnes of organic mulberry tea per day, and exports to five countries, including Japan, Australia, Germany and Canada.

Suthatsanee Rajruangrabin, deputy director-general of the Internal Trade Department, said the ministry expects the Thai organic market to grow more than 10% this year from about 2.7 billion baht.

Of the total, exports account for 1.8 billion and domestic sales for 900 million. Thailand’s organic product exports represent 0.7% of the world’s market.

Markus Reetz, executive director of international exhibitions at Nuremberg Exhibition Centre in Germany, which is the organiser of the biggest organic trade fair in the world, said Thailand has the potential to become Asean’s organic trading centre because of its location and government support policies.

The German company is teaming up with the Commerce Ministry to organise BIOFACH Southeast Asia and Natural Expo, the first organic trade fairs in Asean. The events are both scheduled at Impact Muang Thong Thani for July 12-15.

“The organic market has promising growth in Thailand, while the government also has active policy to promote organic businesses and the location is central to Southeast Asia,” Mr Reetz said.

Mr Reetz said the world’s organic market has registered significant growth, worth some $110 billion, with the US controlling the largest share at $50 billion. Europe accounts for $40 billion, while $20 million comes from other markets in Oceania and Asia.

The organic market makes up only 1% of the overall food market.