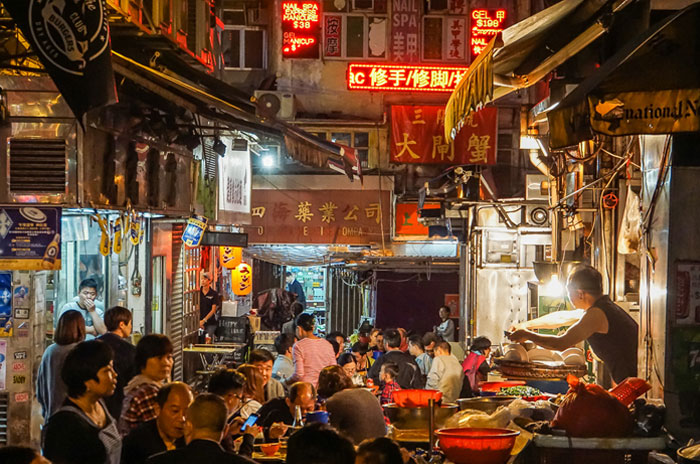 Whether you want to spend lavishly or be frugal on your food trips, this culinary mecca named Hong ong will never run out of choices to offer tourists and locals alike. It is just incredibly abundant in upscale restaurants, casual eateries and humble street stalls to give everyone a dining experience worth treasuring.

As locals say, “When in Hong Kong, eat as the Hong Kongers do.” And there is just no better way of doing that than by sampling their years-old, classic, and absolutely appetizing street fare. With cheap stalls teeming the bustling streets of Hong Kong, your HK$50 ($6.44) would go a very long way.

To know which among the street food you should not fail to get, Asia’s Food Experts have compiled a list of the 10 glorious street snacks in HK. Some of them may strike you as weird-looking, odd-smelling and strange-tasting, but each item is certainly worth a try.

Curry fishballs areprobably Hong Kong’smosticonic street snack – nearly every savoury street stall sells these. Though they’remostly made from flour these days and contain almost no fish meat, this has had little effect on the snack’s popularity. Springy in texture, the bite-sized spheres bob about in a strong curry sauce before they’re skewered on a bamboo stick or ladled into a takeaway bowl for on-the-pavement enjoyment.

Immediately recognisable by its bright yellow wrapper, this ubiquitous streetside snack differs from its pork-filled counterpart served in dim sum parlours in that it’s made with flour kneaded with a bit of fish meat (although most stalls forego the latter ingredient completely nowadays to cut costs). These are then steamed and doused in soy sauce. Those who crave a kick of heat can also pile on the chilli sauce. Like fishballs, you’ll find steamed siu mai at most savoury snack stalls.

Despite its pungent odour, stinky tofu is one of the most delicious snacks you can find on our streets. The beancurd gets its distinct funk from a lengthy process of fermentation, usually in a brine of milk, vegetables or even meat. It’s then deep-fried and usually served with chilli sauce. The outer layer is crisp and golden and gives way to a soft and creamy centre. If you can get past the smell, this stinky snack is sure to please. Want to give it a go? Chuen Cheong Foods in Wan Chai is your best bet.

An egg waffle looks like an oversized bubble wrap with crispy, flaky edges that give a contrast to its chewy, soft and eggy center. The play of textures in the mouth and the lightness of these waffles make them easily addictive. A huge add-on is that it just has enough sweetness to satiate your sweet tooth, plus it packs a taste of childhood memories and of happiness – a reason why a massive number of people adore this snack. Toppings include fruits, ice cream, or chocolate sauce.

There’s no denying in the fact that Hong Kong’s fried pig intestines are not the most appealing street food. But locals, adventurous eaters or not, get a constant craving for this skewered snack. That just says a whole lot about how good these fried pig intestines can be.
For HK$12 ($1.50), you get a stick of very crispy, deep-fried and surprisingly flavorful entrails that will remind you of our beloved bacon. Underneath the crunchy layer are the soft and tender parts of the intestines. Dip this in some chili sauce for a startlingly mild kick.

Loved for its smooth texture and distinct al dente chew, cheung fun is made by rolling steamed rice noodle sheets into bundles, then chopping them into two-bite pieces. Unlike the type served at dim sum restaurants, the streetside variety usually comes without fillings. It’s relatively bland on its own, which is why it’s eaten with a healthy dousing of sauces (sweet, peanut, chilli and soy) and sesame seeds.

Bright orange and with tentacles and suction cups still intact, these might not be the most visually appealing of Hong Kong’s street foods, but they sure are delicious. The cuttlefish and octopus are usually boiled quickly until just tender and thendipped in a soy-based marinade for flavour. Eat them on a bamboo stick with a lick of mustard.

Sold side-by-side at mobile street carts (usually found close to popular railway exits), roasted sweet potatoes and charcoal-cooked chestnuts are popular treats that start to emerge come wintertime. There are only a few street vendors left in Hong Kong that still peddle these delicious wares and they’re identifiable by the distinct aroma they give off and the cloud of smoke that surrounds them. Most of these vendors also sell salt-baked quail eggs. Be sure to grab a bag if you see it.

Sink your teeth into the fluffy and light egg custard that tastes a bit like a flan until your teeth reaches the crispy and chewy crust. One bite just quickly leads to another and leaves you wanting more. Definitely love at first bite. These tarts are made of flour, butter, sugar, milk and eggs and are baked until they reach a consistency that is soft and moist, and are best eaten while warm. Many have willingly fallen prey to these delish morsels since the 1940’s.

Though this is not always available on the streets of Hong Kong, (rather in the coffeshops overlooking the streets) Asia’s Food Experts at Ricebowl Asia feel that it deserves to be included in the list. Hong Kong has a long history of foreign influence, but Hong Kong style French toast isn’t just a thin slice of bread dipped in egg and fried in a skillet: It’s more than that. Using white bread and a mound of butter, the bread is often layered in peanut butter before being deep fried (yes, deep fried), and then topped with syrup and more butter. It’s really more of a dessert than a breakfast dish.