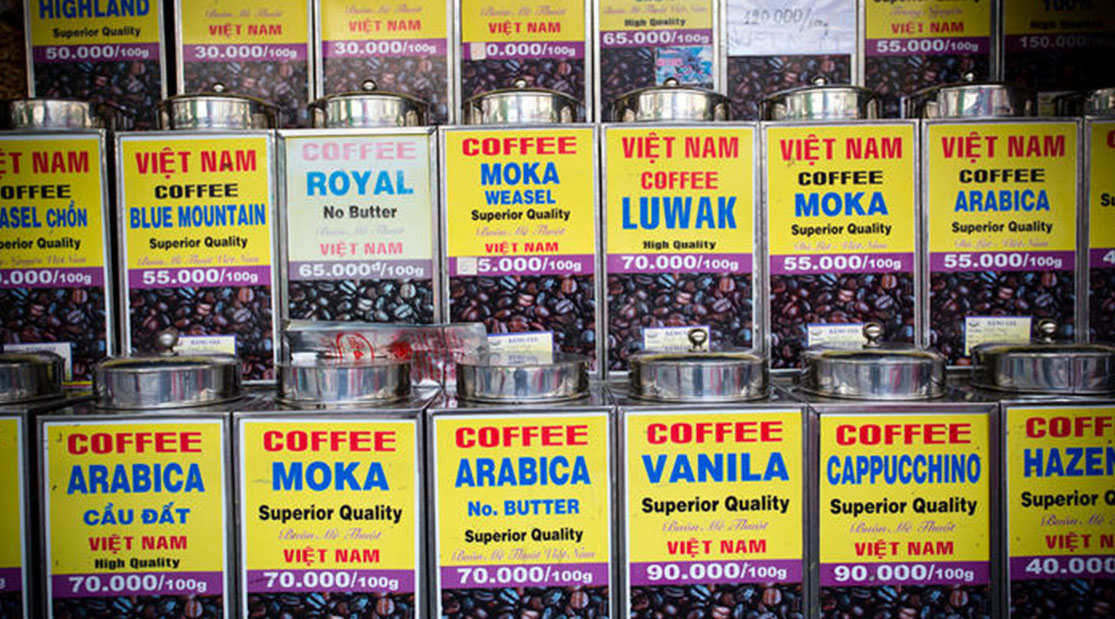 Vietnam is the world’s second biggest coffee producer and a rich and inventive coffee culture has been steadily brewing.

Vietnam is famous for its frenetic pace and it’s fair to say the nation’s passion for coffee must be at least partially responsible for the energetic buzz. Coffee is a huge part of daily life.

“Like many places in the world, Vietnam has a large coffee culture that allows people to socialise,” Jerry Mai, head chef and owner of Annam, a Vietnamese eatery.

The French introduced Vietnam to coffee in 1857, with production really taking off in the central highlands region in the years following the Vietnam War. Since the mid-90s, when the government pushed a massive coffee production program, Vietnam has quickly grown to be the second biggest coffee producer in the world after Brazil. One of its biggest exports is instant coffee, made from the robusta beans that grow so well in the region.

There’s a fair amount of instant coffee being drunk in Vietnam itself, but it’s drip filter coffee that’s really taken off. Coffee shops abound on every corner throughout the country and are even a feature of many businesses. Sit-down cafés are often housed within another retail business, such as a professional office, clothing store or bookshop. Stand-alone coffee shops are also everywhere, with many parts of Vietnamese coffee shop chains like Highlands, The Coffee House and Phuc Long.

Café coffee is most often brewed in individual portions using a phin, a French-style metal drip filter which sits on top of the cup. Coarsely ground robusta beans are tightly pressed into the top of the phin (preheated via a pour of hot water), and boiling water is slowly filtered through. The resulting coffee is rich, bitter and slightly nutty.

“The beans are roasted with butter and brandy,” says Mai. “This sets Vietnamese coffee apart from other coffees. The butter gives it a richness in the back palate and brandy brings an incredible, spicy aroma that is unique.

A quick warning: the more bitter taste of Vietnamese coffee is due to the high caffeine content. Robusta beans contain almost double the caffeine of Arabica beans.

The long shelf-life of a can of condensed milk, even after opening, traditionally made it a good choice as a coffee additive. The strong taste of robusta coffee is probably the reason why condensed milk remained the condiment of choice in Vietnam long after refrigeration became readily available. While the intense sweetness of condensed milk doesn’t pair well with the sweet, soft taste of Arabica coffee, it’s actually perfect with robusta, balancing out the bitter aftertaste.

How to make Vietnamese coffee

Many Vietnamese are very particular about the brand of condensed milk they add to their daily brew. Longevity is a popular brand, known for being extra thick and a little less sweet.

It’s not just condensed milk that finds its way into coffee in Vietnam. Unique coffee variations spring up daily, with some sticking around to become a phenomenon of their own.

Even the thought of egg coffee makes you wonder what the first person who decided to crack an egg into their daily brew was thinking. Chances are, they were thinking they needed to dull down the robust taste of robusta and milk was in very short supply.

That’s exactly what happened when Nguyen Van Giang rescued Vietnam’s coffee junkies in 1946 when there was a serious milk shortage during the French War. He started adding an egg to the coffees he served at the Sofitel Legend Metropole Hotel in Hanoi and customers were soon in a froth for his eggy coffee.

Egg coffee is thick and rich – so thick that it needs to be served with a spoon and eaten rather than sipped. The beauty of an egg coffee lies in its unique texture, created by whisking the egg yolk and condensed milk until it begins to take on a dense thickness that is both creamy and to-the-tooth. The mix is then poured into a traditional strong Vietnamese drip coffee. The resulting flavour is often likened to a liquid tiramisu.

It’s a hard brew to master (it has an egg difficulty rating up there with Hollandaise sauce), so establishments that perfect the technique have an enduring popularity.  Giang himself went on to open his own coffee house, Café Giang in Hanoi’s Old Quarter, which is still serving egg coffee today, managed by his son Nguyen Van Do.

A newer kid on the block than egg coffee, yoghurt coffee is increasingly being offered in cafés all over Vietnam. The French brought yoghurt to Vietnam around the same time they brought coffee, so it stands to reason that the two ended up married in a caffeine concoction.

The drink is served hot or cold, with either a dollop of yoghurt added to a cup of coffee or a dollop of coffee added to a cup of yoghurt, depending on your preference. Naturally, condensed milk is often added to sweeten the brew. Condensed milk stirred through yoghurt is actually a popular Vietnamese sweet treat, so adding a coffee kick was a natural progression. The yoghurt adds an acid tartness that perfectly balances out the bitter, sweet flavours of condensed milk coffee.

Any kind of coffee is offered as an iced coffee in the sweltering heat of a Vietnamese summer. A favourite way to serve it is by adding coconut milk to a traditional condensed milk brew. The coffee is allowed to cool, ice is added then the two types of milk are slowly poured on top. Lately, inspired cafés have taken to serving an ‘iced coffee smoothie’, where the coffee, ice and milk are blitzed to a frothy refreshment.

“When I’m running around, a refreshing Vietnamese iced coffee is my go to,” Mai says. “The condensed milk makes it rich and caramel-flavoured. It’s cooling and a great sugar pick-up when I’m on the go.”

If you get a chance of visiting Vietnam, try experiencing the coffee-eggy-deliciousness on the side of a busy Hanoi street. Hundreds of mopeds zoom by, as bicycles and carts laden with Pho, Banh Mi and market-fresh flowers slowly wheel by. You will see that Hanoi never stops. That is the caffeine.