Rivers without Fish: Cambodia is Facing a Food Crisis 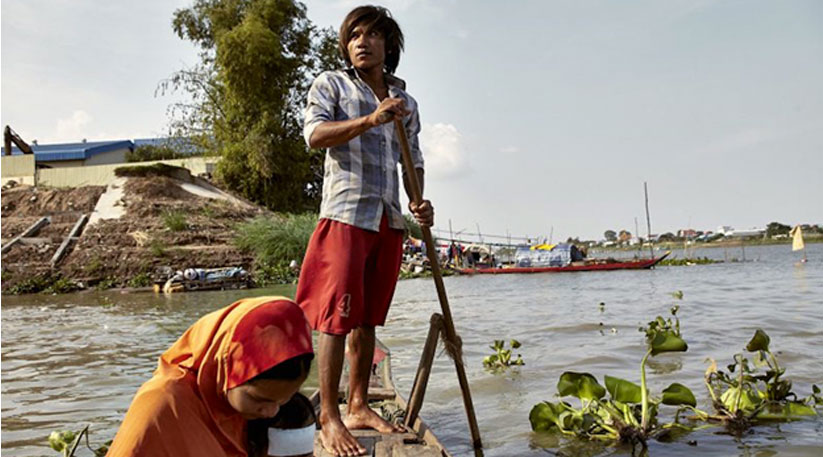 PHNOM PENH – For hundreds of years, Cambodians have been relying on the Tonle Sap Lake for meals. But a feast of grilled river fish, sprinkled with salt and stuffed with lemongrass, may soon be a very special event.

Today, “there is only water but no fish,” said Nan Sok, 60, gazing at Tonle Sap Lake from his house on the outskirts of the capital city of Phnom Penh.

A Cambodian Muslim fisherman, he recalled that in 1979 he could “catch the fish just by dipping my hand in the water there were so many. … But now even if I use a big net for a whole day, there would be nothing.”

Cambodia’s growing population and changes to the lake’s unusual seasonal rise and fall, are contributing to the decline in the catch. Other contributing factors include dam construction and indiscriminate, often illegal fishing practices, according to a 15-year study  of Tonle Sap conducted by Ngor Peng Bun, a Fisheries Administration officer, and published in 2018.

By some accounts, the lake may be reaching its capacity for fish production. Or, as Ngor Pengbun wrote in a 2018 Nature article, “Stakeholders, government and developers must put conservation and mitigation measures in place before it’s too late.”

And now, a year later, the factors dictating changes in the Tonle Sap Lake catch, which experts say provides Cambodians with more than 70% of their protein intake, may be combining to create a crisis.

“A severely low fish catch this year could cause a major food crisis in Cambodia,” Eyler said. “The kingdom has little resources to replace the loss in fish catch with other protein sources. The crisis could play out during the winter months.”

Cambodia’s Tonle Sap is the largest freshwater lake in Southeast Asia and provides Cambodia with 500,000 tons of fish, according to a report by Eyler.

Sos Nob, 48, sells fish on the sandy promontory where the Mekong and Tonle Sap rivers meet in Phnom Penh.

A longtime river fish seller, she speculated the country’s population growth may have something to do with today’s smaller catch.

Cambodia’s population has increased from 6 million in 1980, a year after the end of the Khmer Rouge’s murderous four-year rule, to 16 million in 2018, according to the World Bank, with most people living in rural areas.

“Because Cambodia’s population has increased so much, the fishing activities have also increased,” said Eng Cheasan. While saying that “the larger fish species take years to fully mature” he said that overall, the catch is not declining because of the increase in the catch of small species.

Tonle Sap River, a tributary of the Mekong River, feeds Tonle Sap Lake. When the monsoon begins, the swollen Mekong River flows north into Tonle Sap Lake and spreads over the surrounding flood plain, according to a Stimson Center report, Letters from the Mekong.

Then, during the dry season, the lake drains through the Tonle Sap River to the Mekong River. This year, the Tonle Sap reversal happened much later than usual, in late August rather than in July.

“Tonle Sap is the beating heart of the Mekong,” said Eyler, author of the Stimson Center report published in February.

As with a human heart, any aberration is cause for concern, and this year there were two: the flood season was short and the waters ran low.

Eyler said that the result of the complicated natural process is straightforward: “The longer the flood season and the higher floods in the Tonle Sap, the more fish will be caught.”

“This year’s flood season has been dangerously short and the floods quite low,” he said.

“So I predict a lower fish catch later this year during the major fishing season in December and January,” Eyler said. “The lake flooded for about six weeks when it normally will flood for about four months.”

Hydropower and irrigation dams on the Mekong River in Cambodia, Laos, Vietnam and China continue to imperil the catch.

“Between 1970 and 1998, the average wet season discharge was at least 10% lower than in 1924-56, according to a 2003 report published under the auspices of the Mekong River Commission. “The downward trend seems to be independent of fluctuations in rainfall and has been linked to dam building activities that started in the late ’50s.”

The dams threaten the catch by blocking fish migration patterns, preventing many from reaching Tonle Sap Lake, so famed for its biodiversity that it is recognized by the United Nations.

“Ultimately, the project would jeopardize the fisheries vital to Cambodia’s economy and food security,” according to International Rivers, an environmental NGO.

International Rivers is calling on the Cambodia government to rethink dam construction on the lower Mekong and use alternative solutions such as solar power for electricity.

Ngor Pengbun’s 2018 study, “Evidence of Indiscriminate Fishing Effects in One of the World’s Inland Fisheries,” spanned 2000 to 2015 and looked at 116 sites on Tonle Sap Lake. In 78% of Tonle Sap’s fish species, researchers found a decrease in the catch, with medium- and large-size fish hardest hit even as the numbers of smaller fish increased enough to offset the declines among larger species.

The larger species take longer to mature and have a longer migration route than the smaller species. For example, the abundant 3-meter-long Mekong Giant Catfish and the Tonle Sap Giant Barb, the national fish of Cambodia that can top 300 kilograms, began declining 20 years ago. According to a World Wildlife Fund study published in 2010, researchers found the stock of the two species were down 90% in that period.

Last week, Sos Nob, the 48-year-old fish seller, displayed only one catfish, three-quarters of a meter long, in her basket. As the fish gasped for its final taste of oxygen, she explained that a decade ago, she had as many as 10 of the giant catfish or carp on offer each day.

“After the Khmer Rouge era, there are many big fish, and this small one I am selling, nobody would buy it, but now as long as there is river fish even smaller than these, people would buy it all,” said Sos Nob, adding buyers grumbled but paid more as the catch decreased.

Aside from more people eating more fish, more Cambodians are fishing and more of them are using affordable gear such as monofilament nylon gillnets. Because they can be set and left untended, the gillnets appeal to commercial and casual fishers for their efficiency.

“This kind of fishing removes the biggest fish from the food web and allows smaller, less nutritious fish to thrive, which is why we see more and more smaller fish coming out of the lake — and fewer large fish like the Giant Mekong Barb or Giant Mekong Catfish,” Eyler said. “Both species now are critically endangered.”

He blames the lax fishing regulations that allow people to fish indiscriminately throughout the year, taking as many fish using whichever method is easiest.

As example of lax enforcement, the 2007 Law on Fisheries, limits gillnets for personal use to 10 meters in length, but most nets are 50 meters or longer, according to the Mekong River Commission. Traditional Dai nets “have remained largely unchanged for over a century and may have been chosen to maximize catch rates determined by river morphology and hydrology,” according to the commission.

As of September 2019, at least 900,000 meters of fishing net have been seized and destroyed and about 2,000 illegal fishing cases found, according to Eng Cheasan.

Shopping recently at the riverbank market with husband and baby in tow, Lim Vanthearath examined the catch, tut-tutting at the prices. She wanted about half a kilogram of small catfish and buys fresh river fish whenever she can.

While paying the fishmonger who had decapitated a live fish and plopped it in a small plastic bag, Lim Vanthearath said the river fish was still worth the price.

“It is very sweet, with a good texture,” she said, “unlike fish that is raised by fish farming.”