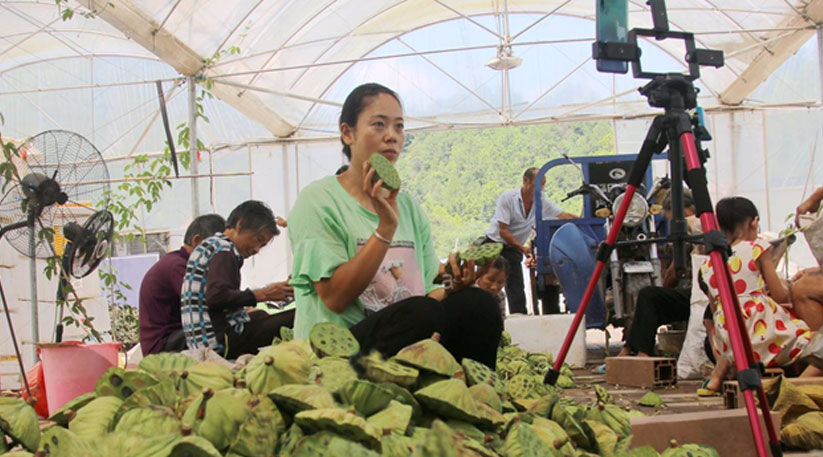 As live-casting e-commerce flourishes in China, revolutionary changes are taking place in the food-supply distribution chain.

Small farmers with generic produce sold 100,000 bags of cereals and grains in 5 hours. It would be impossible through traditional channels, but stories like these have become common on China’s live-casting e-commerce platforms that utilize professional KOL (Key Opinion Leader) or online influencers to stimulate consumption.

This high-tech vlogger marketing has even affected farm produce. Founded in 2015, online commerce platform Yiben Wanli is a relative newcomer to China’s e-commerce landscape. It began exploring live-casting e-commerce only last year, but with adding value via the energy and personalities of 18 KOLs, the company has increased sales of its singular products by 50 percent.

Ranging from Xinjiang raisins, beef and nuts in the west to Zhoushan fish in the east, the company is targeting select high-quality food resources and discerning consumers from across China, as well as matching right KOLs to sell products.

“These cereals and grains directly come from original farm factories in Shanxi and Zhejiang provinces,” says Zhao, the owner of Yiben Wanli. He proudly announced that his company’s farm to consumer process does not include wholesalers in the middle. That assures the selling price can be competitive in the consumer market while offering higher returns for the farmers.

Many others also benefit from the KOL trend. Taobao, a part of Alibaba Group, is China’s consumer e-commerce powerhouse. Taobao reported that it generated over one trillion RMB revenue in 2018. In early 2019, Taobao officially launched the APP, Taobao Live-casting, which is focused on KOL-based e-commerce and recently announced a plan for rural area-based live-broadcasting, to support 1000 farmers in 100 counties to make monthly incomes over 10,000 RMB (USD$1,400.) The average rural farmer monthly income in 2018 according to Greenbook was 1200 RMB (USD$ 167.) Taobao projects 3 billion RMB in farm produce sales in 2019.

According to the Information Office of the State Council, since 2016, 83 billion RMB has been invested by the central government, enterprise, banks and local fiscal funds in improving network infrastructures in rural areas.

Aside from relying on Taobao’s live-casting e-commerce platform, Yiben Wanli seeks revenue from other platforms like Tik Tok and Red that can turn would-be influencers’ attention-hogging into web traffic and driving consumption. Following Taobao’s model in launching its own live-casting e-commerce app early this year, Zhao shifted his company’s own business model from KOL-oriented to product-sales.

Millions of young vloggers seek their 15 minutes of fame on the internet with top KOL boasting millions of fans among the 600 million Chinese that follow at least one KOL. By 2015, top influencers were becoming a sort of celebrity and were widely adopted by Chinese companies as freelance marketers and the mobile airwaves crackled with their vlogs and brand tie-ins but in 2017, regulators restricted the market. It is a new trend for these influencers to take on the role more as salespeople than celebrity.

After experiencing ups and downs in KOL live-casting business from 2015 to 2017, Zhao has more confidence in the new business model that combines KOLs and e-commerce. However, regarding the high cost of KOL celebrities, Zhao is willing to explore a more financially sustainable model. “Eventually, we want farmers rather than KOL to sell farm products,” says Zhao. Zhao added that his company plans to join Taobao’s village live-casting.

Different from traditional marketing that consumers buy food from supermarkets after it has passed though the distribution supply chain, live-casting commerce directly introduces products to consumers from the source where the food originates. That brings consumers access to lower-priced farm-fresh products and brings farmers a greater share of the profits. But more essentially it personalizes consumers’ connection with food.

In China, food is an important part of the traditional culture. Jiu Mei is a vlogger that appreciates that connection and uses her KOL efforts to help consumers meet the people who produce the food and know where the food originates. With her own style, each day she appears in different gardens or farm lands, selling farm products including peaches, kiwis and grapes through Taobao live-casting platform.

“Sometimes the villagers can make the same income within one or two months as they did in one year,” says Jiu Mei. She comes from Xiangxi and represents her neighbors and townspeople to sell their farm products online. Credited by her villagers as a live-cast celebrity, she once sold 1 million kilograms of local oranges via her vlog in 13 days. Through live-casting the entire process of harvest from farms, packaging and delivery to consumers, Jiu Mei has helped farmers find more sustainable business since 2018.

Over 200 million people have participated in about 50,000 village live-broadcasts, covering 270 counties and villages around China since the program’s launch earlier this year. Every month, there are over 60,000 Taobao live-casting on farm products. In the first half of 2019, e-commerce retail of farm products reached 18 billion RMB.

This live casting e-commerce market may be a tasty harvest for local Chinese but foreigners may find it hard to sink their teeth into the market. Though overseas e-commerce revenue in the past half year of 2019 increased by over 20%, with Japan, USA and Korea ranking as top three, live-casting e-commerce success remains elusive to foreigner producers. Zhao’s company tried live-casting for selling tuna fish from Japan. “It’s more troublesome and costs more money,” Zhao concludes.