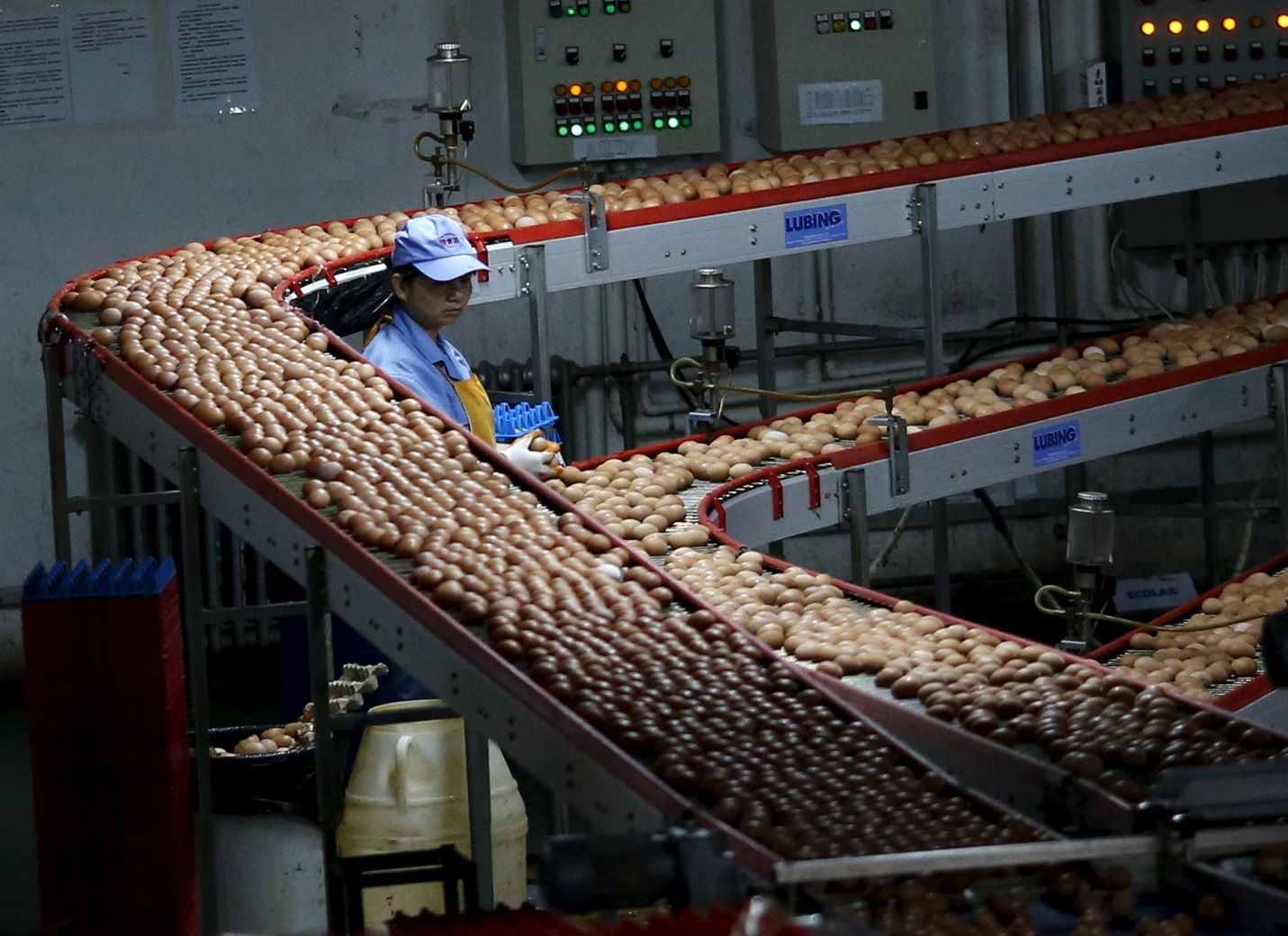 HANDAN, CHINA (REUTERS) – Behind a row of sealed red incubator doors in a new facility in northern China, about 400,000 chicks are hatched every day, part of the rapidly modernising supply chain in China’s US$37 billion (S$50 billion) egg industry, the world’s biggest.

As China overhauls production of everything from pork to milk and vegetables, farmers raising hens for eggs are also shifting from backyards to factory farms, where modern standardised processes are expected to raise quality and safety.

That’s an important step in a country where melamine-tainted eggs and eggs with high antibiotic residues have featured in a series of food safety scandals in recent years. It is also spurring demand for higher priced branded eggs over those sold loose in fresh produce markets.

“These days if you’re a small farmer, your eggs won’t get into the supermarkets,” said Yuan Song, analyst with China-America Commodity Data Analytics.

Tough new regulations on treating manure and reducing the environmental impact from farms have also pushed many small farmers out.

Most egg producers now have between 20,000 and 50,000 hens, said Yuan, a significant change even from two years ago. The remainder with less than 10,000 birds are likely to be shut down soon as local governments favour larger producers that can be more easily scrutinised.

Those rapid changes are driving investments like the 150 million yuan (S$30.7 million) hatchery in Handan, about 400km south-west of Beijing.

The highly automated plant, owned by a joint venture between China’s Huayu Agricultural Science and Technology and EW Group’s genetics business Hy-Line International, is the world’s biggest hatchery of layer chicks, or birds raised to produce eggs rather than meat.

By producing 200,000 females a day, or around 60 million layers a year (one day a week is for cleaning), it can meet demand from larger farms who want to buy day-old-chicks in one batch, said Jonathan Cade, president of Hy-Line International, based in West Des Moines, Iowa.

“That’s the best way to start off with good biosecurity,” he said. When the birds on one farm are the same age, they are less likely to spread disease.

Imported, latest-generation equipment helps speed up the throughput of the hatchery. An automatic grading machine, which can handle 60,000 eggs an hour, sorts eggs into two acceptable sizes before they enter incubators – uniform eggs produce similar sized chicks that will have the same feeding ability.

Once hatched, female chicks go to automated beak-clipping machines that process around 3,500 an hour.

Only 20 staff will be needed in the new plant, compared with around 100 in Huayu’s older hatchery, said Huayu chairman Wang Lianzeng.

Efficiency is important in an industry which is not expected to see much volume growth. The Chinese already eat more eggs per capita than almost everyone else, about 280 a year or almost one billion a day across the country, so consumption is unlikely to rise much.

Breeders like Huayu are trying to grow by taking market share from others. In addition to the new Handan hatchery, it is building another in Chongqing, which will bring annual production to 180 million chicks.

Layer inventory last year was around 1.2 billion, according to the China Animal Agriculture Association.

Huayu is also looking into breeding layers and building hatcheries in South-East Asia and Africa, said Wang, the chairman.

Key to industrial scale facilities will be managing the risks of disease. Prices and demand for eggs and poultry plunged last year, after hundreds of people died from contracting bird flu, even though the disease left flocks largely unscathed.

Although that has created new opportunities for large players to expand after others were forced to exit, the impact of a disease outbreak on intensive operations is significantly higher.

Wang said biosecurity is the major advantage in the new hatchery, which uses advanced ventilation and environmental controls to keep new chicks healthy.

“When you enter the hatchery you wouldn’t know you’re in a hatchery,” he said, referring to the smell typical in older facilities.

Disinfection is used at every step along the chain and workers follow strict procedures on hygiene, he added.

A safe environment with very high standards of biosecurity is important in raising chicks, said Wang.

With such pressures on production, improving animal welfare is unsurprisingly not a priority, said Jeff Zhou, China representative for Compassion in World Farming (CIWF), a non-profit.

China has no animal welfare regulations, although some companies have begun voluntarily to phase out the painful beak-trimming practice, including Huayu rival Ningxia Xiaoming Farming and Animal Husbandry Co.

Xiaoming is also supplying male chicks from its hatcheries to local farmers to rear for meat in free-range environments, according to CIWF. Huayu sells its male chicks as food for snakes, which are farmed in China for traditional medicine.