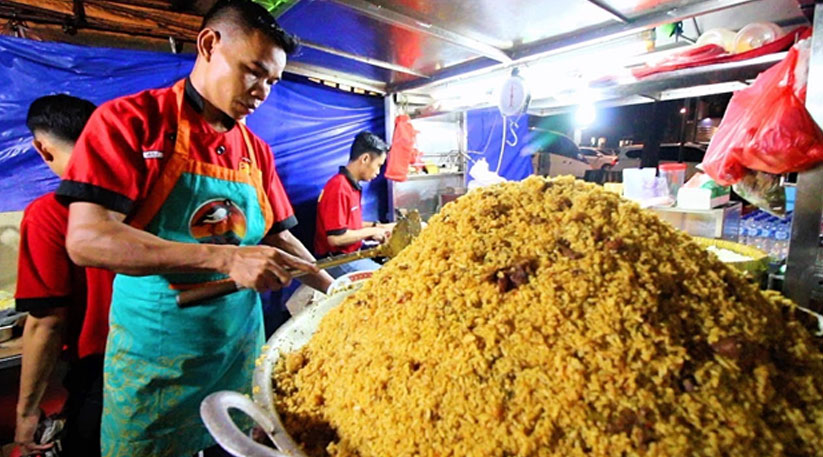 Indonesia’s national dish of nasi goreng, or fried rice, has become a lot cheaper these days as the nation’s two big ride-hailing apps wage a price war on everyday groceries.

In a battle for market share in Southeast Asia’s biggest economy, Gojek and Grab are giving discounts of as much as 50% and more on purchases made online or with e-wallets. Not only is the competition making food more affordable, it’s also keeping a lid on inflation and allowing the central bank to cut interest rates.

Some of the key ingredients in nasi goreng — rice, onions, eggs and chili — could be bought this week from The FoodHall supermarket via the Grab app for 144,600 rupiah ($10.30). Those goods cost 156,186 rupiah if purchased directly from the same store in central Jakarta.

It’s difficult to assess the direct effect online purchases are having on price-growth in the economy, but its certainly helping to “dampen inflationary pressures,” said Enrico Tanuwidjaja, head of economics and research for PT UOB Indonesia in Jakarta.

Inflation eased to 3.1% in October from a year ago, the slowest pace in six months, staying well within the central bank’s target band of 2.5%-4.5%. Growth in food prices, which make up about 19% of the consumer price index, eased to 4.8% in October from 5.4% in September.

Low inflation has allowed Bank Indonesia to cut interest rates four times this year to help support the economy amid a global slowdown. The bank is set to lower its inflation target band to 2%-4% in 2020 as price pressures remain subdued.

Grab and Gojek — fighting for dominance in a country of 267 million people and 355 million mobile phones — have morphed from ride-hailing services to super apps, offering everything from food delivery to massages and furniture removal. The startups are racing to lock in customers as they win over billions of dollars of investment from the likes of Google, JD.com Inc., Tencent Holdings Ltd. and SoftBank Group Corp.

A country of some 17,000 islands, Indonesia has seen an explosion in e-commerce in recent years, with online transactions surging 230% last year, according to the central bank.

Grab’s grocery service is via HappyFresh, another startup it invested in. With Gojek, a consumer can purchase groceries directly via the app or receive discounts and cash refunds when buying goods directly at a supermarket using its e-wallet.

There’s still reason to be cautious on inflation though, since the discounts and cashback offers from the ride-hailing apps won’t last forever, Tanuwidjaja said.

“Once you pull the plug, inflation may not necessarily stay muted,” he said.