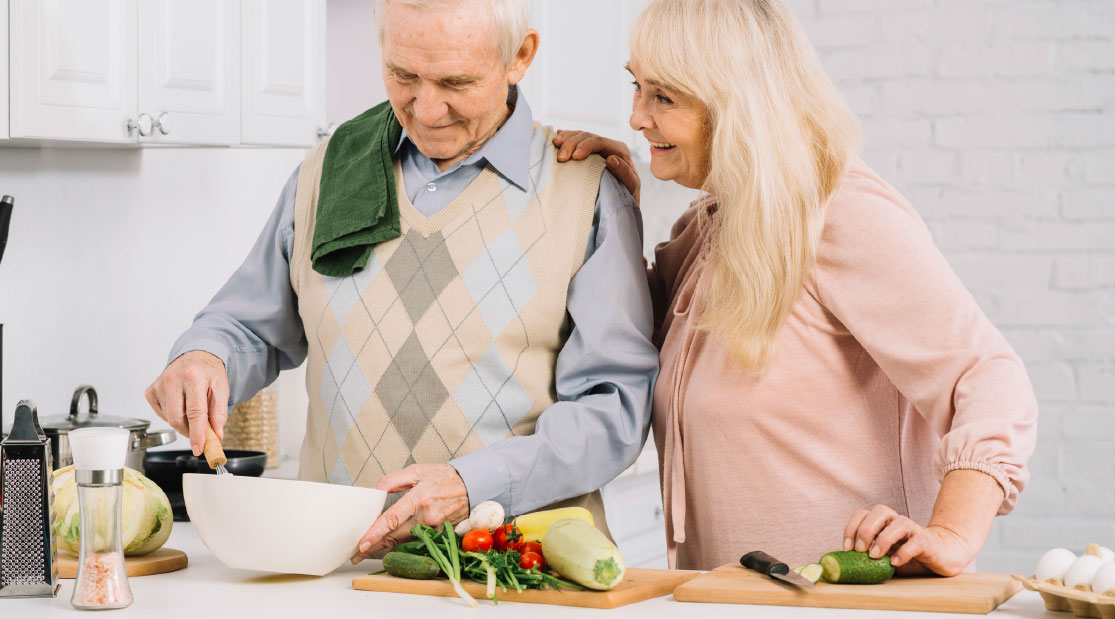 As we age, our bodies become less active and our ability to burn off excess calories and fat will not be as efficient. Seniors should cut down on the consumption of trans and saturated fats as they are promoting the risk of heart disease. Thus, staying healthily by selecting the right fats and maintaining healthy weight is incredibly important for overall health and wellbeing.

Omega-3 and 6 fats are beneficial fats that are highly anti-inflammatory and contain heart – beneficial properties especially for elderlies. They promote healthy heart and reduce the risk of cardiovascular diseases. Researches have demonstrated that omega-3 fatty acids decrease the risk of Arrhythmias which can lead to sudden death. In addition, Omega-3 fatty acids help in decreasing triglyceride levels, reducing the growth rate of atherosclerotic plaque as well as lowering blood pressure (American Heart Association, 2017).

Omega-3 fatty acids benefit the heart in particularly for those who are having high risk of cardiovascular diseases. Research has shown that omega-3 fatty acids decrease the risk of arrhythmias (abnormal heartbeats), which can lead to sudden death.  Omega-3 fatty acids also decrease triglyceride levels, slow the growth rate of atherosclerotic plaque, and slightly lower blood pressure.

The consumption of omega-3 fortified foods is a great option to increase EPA and DHA intake in vegans as well as individuals who dislike fish and seafood. The FDA has approved up to 3000mg/day of EPA plus DHA from food and supplements as safe (Bowen et al., 2016).

Alzheimer’s disease is the most common cause of dementia in older adults and an important public health problem. It is a degenerative brain disease and the most common cause of dementia. Dementia is characterized by a decline in memory, language, problem-solving and other cognitive skills that affects a person’s ability to perform daily activities due to the destruction of nerve cells of the brains (Alzheimer’s Association, 2016).

In another study, patients with very mild cognitive dysfunction in the EPA and DHA supplemented group had a significant reduction in Mini-Mental State Examination (MMSE), scoring a declining rate at 6 month (Freund-Levi et al., 2006).

Trans-fat is the culprit which imparts markedly unfavorable serum lipid profiles, by increasing blood concentrations of low-density lipoprotein (LDL) cholesterols and triacylglycerol while decreasing the levels of high-density lipoprotein (HDL) cholesterols. Excessive consumption of trans-fat will lead to an increased risk of cardiovascular diseases (Estadella, et al., 2013) within elderlies.

The primary dietary source for trans-fats in processed food is “partially hydrogenated oils”. They are easy to use, inexpensive to produce and can last for a long time. Trans-fats give foods a desirable taste and texture (American Heart Association, 2017). Apart from increasing the shelf life of the hydrogenated fats, partial hydrogenation increases their melting point which provides the required texture and consistency to prepare margarines, shortenings, bakery and frying fats (Ghafoorunissa, 2008). Trans-fats can also be formed under drastic heating conditions, for example heating the oil at high temperatures or reusing the oil many times (Liu et al. 2007).

Omegas have been widely incorporated into food and beverage applications including breads, pasta, cereals, dairy products, eggs, meats, juices, salad dressings, spreads and oils (Bowen et al., 2016). Omega fatty acids are essential fatty acids with diverse biological effects which exhibit great benefits in human health and are gaining public interest with evidence of health benefits in humans. There are an increasing number of people turning to supplements of fish oil and of its omega-3 poly-unsaturated fatty acids EPA and DHA.

It is crucial for seniors to cut down consumption of trans-fat as it increases the risks related to cardiovascular diseases. They contribute to the buildup of plaque inside the arteries which increase the risk for heart attack as well as diabetes and metabolic syndrome (Duyff, 2017).

You may also be interested in Healthy Fats for Pregnancy, Keto Diet for Weight Loss or Why Children Need Healthy Fat

Ghafoorunissa. (2008). Role of Trans Fatty Acids in Health and Challenges to Their Reduction in Indian Foods. Asia Pacific Journal of Clinical Nutrition, 17(S1), 212-215.