Everything You Need To Know About Mukbang 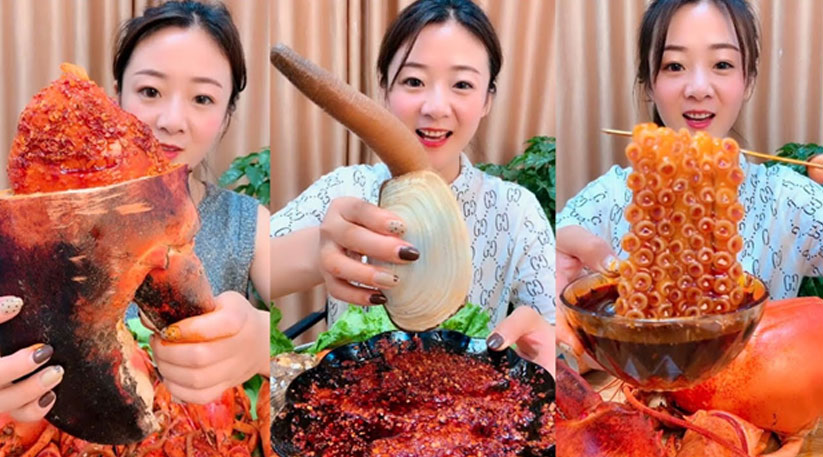 Try spending some time on YouTube and before you know it, videos of people eating huge amounts of food in front of the camera will appear on your home page or suggested videos. And those videos would all carry the word ‘Mukbang’ in their titles. But what exactly is it?

Directly translated, Mukbang means “eating broadcast”. Originated from South Korea, Mukbangs became a hit in 2010. The eaters, often time called Mukbangers, were getting paid to eat a lot of food in front of a webcam for a live audience online. They were paid with “star balloons,” a type of virtual currency that was bought and sold with cash.

Nine years later, Mukbang has become a global trend. Mukbangers sprouted from all corners of the globe via Youtube and other social media platforms. Those who do Mukbangs on Youtube, earn money the way most YouTubers do—through views, ads, and sponsored content. Mukbangers with large followings simply have brands pay for the food which they will eat on camera.

How does Mukbang work?

In Mukbang videos, the food is displayed really close to the camera, sometimes making them appear bigger than they actually are. Though it’s not necessary for all the food to come from one place, there usually is a theme for the video. For example, fried chicken Mukbangs or seafood boil Mukbangs are extremely popular. There are also Mukbangs dedicated to specific brands—usually fast food establishments. Before the eating starts, the professional eater usually goes through the “menu” for the day.

Depending on their budget and following, Mukbangers usually have special mics in place, mics that pick up the slightest sounds so the viewers can hear every bite. In the past, food challenges were common in the Mukbang community, specifically when the Spicy Noodle Challenge became popular. The goal was to consume food as fast as you can (yes, for entertainment). In the last couple of years, however, Mukbangs have become more of a sit-down meal between the YouTuber and the audience, with videos averaging 30 minutes in duration.

Drive-thru Mukbangs are all the rave these days; the latest trend is to order the same food as the people in the car in front of you.

One of the most popular kinds of Mukbangs are ASMR videos. ASMR stands for “Autonomous Sensory Meridian Response. Those who shoot ASMR videos generally don’t speak above a whisper. Dubbed as “brain orgasm,” ASMR refers to that soothing or calming feeling you get when you hear certain triggers. And no, this isn’t exclusive to food videos; some people use ASMR sounds—finger tapping, hair brushing, among many others—to help them relax and sleep.

Why is Mukbang so popular?

There are several reasons why viewers love to watch other people eat, especially in large quantities. A survey carried out by the Seoul University of South Korea highlighted one reason – the desire actually stems from loneliness. For viewers that don’t have a friend to socialize with often or are in an unhappy relationship, they seek that companionship in people who eat on camera. In a way, viewers are pretending to have a meal with the Mukbangers. Many can relate to the reasoning because even if they’re not eating when they start to watch a Mukbang video, more often than not, they will be reaching for some type of food while the video is playing.

Another reason why Mukbangs have become more common is because people love to watch other people eat food they don’t have easy access to. Look at famous Mukbang YouTube channels and you’ll notice that the most popular “requests” involve seafood, which isn’t exactly the cheapest thing to buy. Most viewers love to watch Mukbangs that have a lot of expensive seafood like lobster tails, king crab legs, and crawfish as these are not readily available for a lot of people.

How does Mukbang affect health?

It may be appealing and psychologically satisfying to watch other people eat, but the reality is that consuming insane amounts of food isn’t good for one’s health. 99 out of 100 Mukbangers do not have bowls of vegetables in front of them. Most of the time, the menu consists of processed food drenched in cheese or spicy sauce amounting to more than the acceptable daily caloric intake which can lead to obesity.

Some YouTubers who do Mukbangs have revealed that outside of filming, they actually practice healthy diets. Famous Mukbanger Veronica Wang, for example, focuses on taking in greens and chicken breast when she isn’t eating on cam. She also goes to the gym often. But according to Dr. Andrew Bates, a physician attached to the Men’s Health magazine, this isn’t doing their body any good. Mukbangers may think they are “making up” for eating poorly by eating properly the rest of the time, but in reality, they are tempering with their body’s system: “Your body won’t know whether you’re in feast or famine mode, and this rollercoaster ride can have damaging effects long-term”.

There’s also the risk of triggering an eating disorder since some Mukbangers eat one big meal and then decide not to eat anything for the rest of the day. It could create an unhealthy relationship with food that’s built on extreme dieting.