Clash of Cuisines: Sushi vs Gimbap 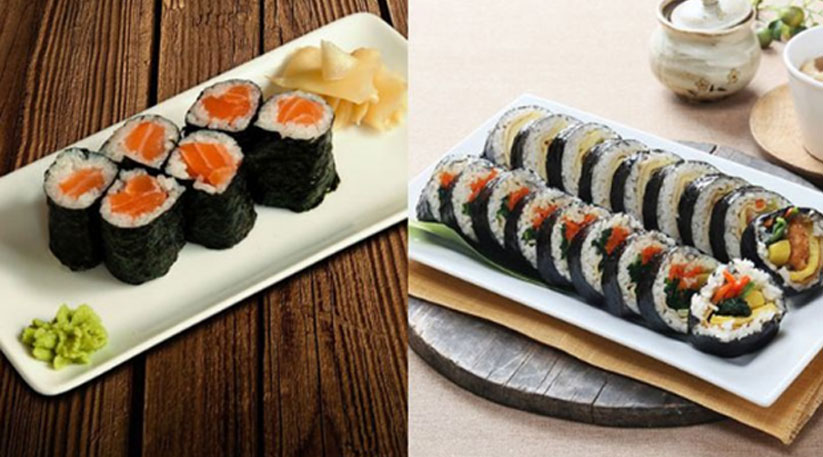 In 2018, National Geographic published a report listing Japan and Korea as top countries with the longest lifespans of its population. Food plays an integral part of a nation’s health and wellbeing, and Japanese and Korean dishes are known to incorporate some of the healthiest and cleanest ingredients in their cooking. Thus, their cuisines have always been regarded as some of the healthiest amongst the many cuisines from all around the globe.

There are many similarities between Japanese and Korean cuisines. Much of their dishes involves wrapping and rolling. However, each of them has its own meaning and cultural symbolism pointing to its origin.

Though their dishes sometimes look alike, they are totally different from one another. As the Food Experts of Asia, we take it upon ourselves to differentiate between the two cuisines, focusing on the differences between Japanese Sushi and Korean Gimbap.

The origin of the word “Sushi” comes for an ancient Japanese dialect that is no longer spoken. The word translates to ‘sour tasting’ and describes the fermentation process that preserved the fish, an important protein source in the Asian region.

Over the years, food preparation methods were altered. To heighten the flavor of Sushi, vinegar was added to the rice. The addition also marinates the fish in such a way that fermentation was no longer needed.  Today’s Sushi is made fresh and has a greatly increased shelf-life over the original version.

The name Gimbap originated from two ingredients that make the dish – Gim (seaweed) and Bap (rice) as Koreans have a long tradition of eating rice rolled in seaweed. Gimbap doesn’t rely solely on raw fish like Sushi does, and are enjoyed with added ingredients called ‘banchan’ which means side dishes. The term – Gimbap – was not used in Korean culture until recently.

Every type of Sushi begins with a specially prepared short-grain Japanese rice (short and plump white rice). The rice is flavored with vinegar, sugar, and salt.  Mixing all the ingredients allow the rice to attain the sticky texture it is famously known. Regionally preferred ingredients are then added such as raw fish, tuna, shrimp, tofu and even cooked eggs. The combination is wrapped in a black seaweed known as ‘nori’ and served raw and chilled.

Like Sushi, the preparation of Gimbap begins with plain cooked rice. While it is often short-grain white rice, it can also be short-grain brown rice or black rice. Other types of grains can also be added, though they are normally used as fillings. The other ingredients of Gimbap are just as varied as Sushi which include cheese, meats and seafood, vegetables and eggs.

Often times, the seaweed is toasted, brushed with sesame oil and sprinkled with sesame seeds. The fillings that accompany the rice and seaweed are stir-fried and rolled together with the rice before cutting it into bite sizes. Seasonings are then added and some can be spicy.

As with any food, the type of Sushi will play into the overall flavor but for those trying Sushi for the first time, it might be surprisingly plain.  Getting over the fear of tasting something foul or fishy might be the biggest difficulty, but if one thinks about it, the main ingredients are not known for strong flavors.  The rice is flavored with vinegar and might have a slight tang to it when first tried. The type of vinegar used does change the flavor of the mix and some recipes call for more sugar or salt than others.  The raw fish will have a light flavor just like when it is cooked but if prepared correctly, it should not taste fishy or spoiled. In most cases, Sushi gets much of its flavor from the condiments or sauces in which it is dipped rather than the Sushi roll itself.  Soy sauce, wasabii and a Japanese style of mayonnaise are popular.

Describing Gimbap is a bit more difficult. Yes, it begins with rice and yes, it has seaweed but it is there that the similarities between Sushi and Gimbap end. Gimbap makes use of far more fillings that raw fish.  There are 12 recognizable types of Gimbap and likely as many more variations of those twelve. It also uses sesame oil as a flavoring rather than the sharp flavor of rice vinegar. If fish is not desired, there are versions with beef, pork, tuna, crabmeat and ham.  A vegetarian has a couple of great choices including a rice and seaweed only option as well as a mixture of cucumber, radish, perilla leaves, etc. Each option has a different flavor based on what is inside.

At this point, it might be good to remember that Sushi is like no other food. Even within Japanese cuisine, Sushi is a unique dish. As such it is not the flavor for which one might enjoy Sushi but the texture.  Served cold, the rice is, of course, sticky so that is holds its shape and can be served with chopsticks. Pieces are typically bite-sized and not intended to be cut or bitten. The raw fish may seem chewy and the seaweed may resemble the experience of accidentally biting into an edible paper wrapper.  Together, the texture is something not found in many places. Generally, one loves it or hates it – there is little middle ground but it can become an acquired pleasure.

As varied as Gimbap can be, it is even more difficult to explain what texture the dish may have.  Because the fillings are stir-fried, the dish is likely to be at room temperature. The rice being seasoned with sesame oil may not be as sticky.  The seaweed is frequently dried or toasted so that texture varies and the fillings can go from chopped and pickled vegetables to large pieces of meat or slices of vegetables.  In short, the texture of Gimbap will vary with the type of dish that is being enjoyed. One version of the dish is even wrapped in a thin egg coating.

Onigiri is the Japanese dish and uses various types of boiled rice, dried fish, cooked meats, pickled vegetables and seasonings. Wrapping such fillings in nori caused the seaweed to become moist and sticky.  In the 1980s, preparation of this dish became mechanized and it has a plastic barrier that keeps the nori and rice mixture from coming together until the package is opened.

Samgak Gimbap is the Korean version and is sold in convenience stores in South Korea. ‘Samgak’ means triangle and describes the unique shape. Just like the more traditional rolled Gimbap, the ingredients can vary greatly. Food chains can specialize in nothing but Gimbap and its variations. This version of Gimbap is also served as a make-your-own pocket meal for informal gatherings.

While there are many similarities between the Sushi and Gimbap, the diversity of Gimbap is hard to forget. Vegans or Vegetarians enjoy more options with Gimbap as opposed to Sushi. Generally seasoned more than Sushi, Gimbap appeals to those who are prefer a mixture of flavors and not just one or two at a time. All things considered – both Sushi and Gimbap boast fresh ingredients and different textures.