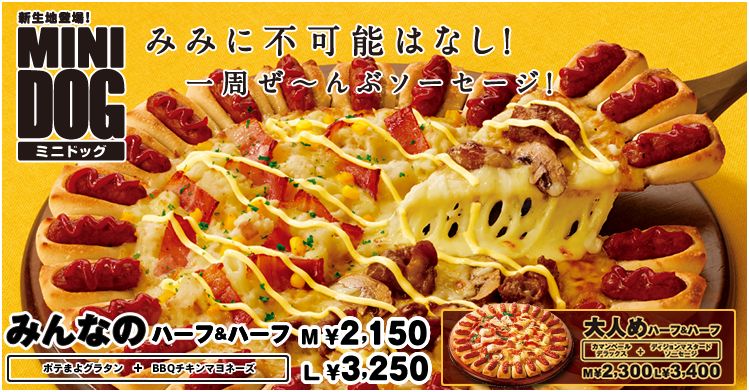 Whenever you walk into pizza parlors like Pizza Hut or Dominos, don’t be surprised that the margheritas and the pepperonis you were craving for are replaced with ingredients that are very much loved in the Asian continent.

Seafood on pizzas may sound bizarre to non-Asians, but it is one of the most common varieties in Hong Kong and many other parts of the continent.

The topping usually includes one or two types of seafood such as shrimp, scallops, tuna, crab stick and squid. Other common ingredients are mushroom, pineapple, peppers and onions.

The base (and sometimes the dressing) of the pizza is thousand island sauce, which is made with mayonnaise and ketchup. Unlike in Europe and North America, where tomato sauce is the dominant base, mayonnaise is popular across Asia.

This topping is offered at almost every pizza chain shop in Hong Kong.

The smelly, spiky Southeast Asian fruit is loathed by many for its unique odour, but its creamy pulp is fast becoming one of the most popular pizza toppings in Asian countries like China and Singapore.

Complemented by butter and cheese, durian pizzas have a special mixed taste of savoury, sweetness and bitterness.

Pizza Hut introduced the flavour in China two years ago, and many smaller competitors have jumped on the bandwagon.

Le Cesar, for example, a Chinese chain that specifically sells durian pizzas, has set up over 120 restaurants across the country. It offers pizzas made with durians of different origins and varieties, such as the famous monthong from Thailand and musang king from Malaysia.

What’s better than combining a classic national dish with pizza?

South Koreans have been enjoying pizzas topped with bulgogi, or marinated barbecue beef slices, for years. This variety accounted for a quarter of the pizza orders in 2014 placed through Yogiyo, a Korean food delivery application, which made it the most popular pizza flavour among the app’s users.

A signature dish of China’s capital city, Peking roast duck is something tourists make sure not to miss. But instead of following the tradition and making your wraps with a thin pancake and some cucumber and spring onion slices, you can now also savour the chewy duck meat on a pizza.

This is one of the most popular dishes at Pizza Express shops in China and is also offered at Pizza Hut restaurants.

This pizza topping that you can easily find in India is another example of Eastern spices and Western flavours being fused perfectly.

Marinated in yogurt and seasoned with a range of spices from garam masala to ginger and garlic, the flavourful tandoori chicken blends well with the mild milky taste of paneer cheese. It has become popular beyond Asia in recent years, making its way into North America and Europe.