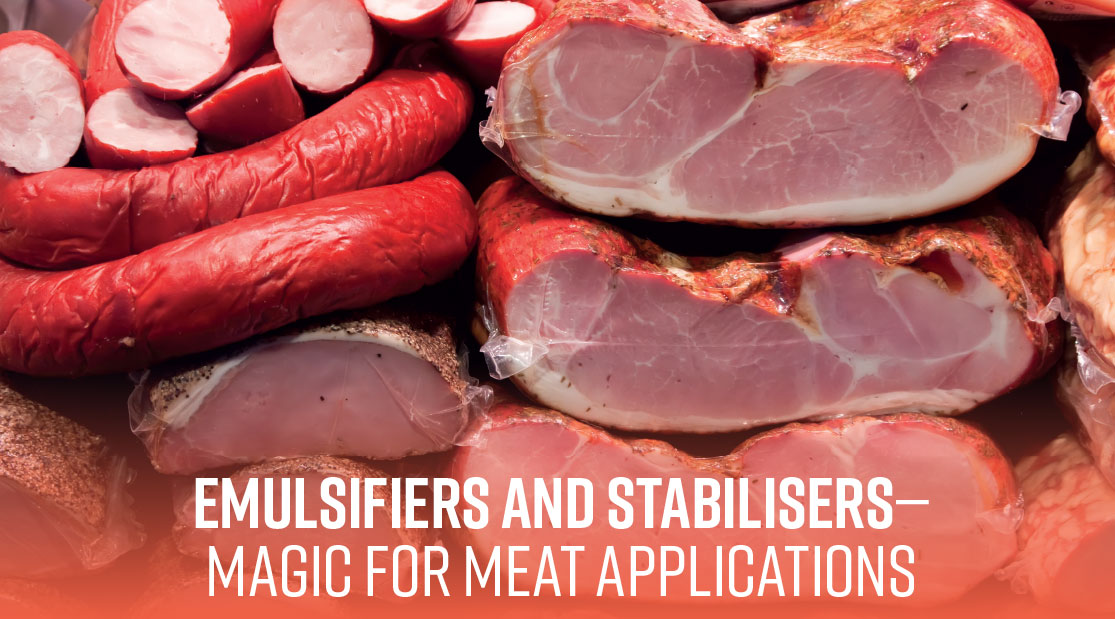 Emulsifiers and stabilisers can be incorporated into a wide range of applications including bakery and confectionery, dairy and frozen desserts, beverages, oil and fats, sweet and savory snacks, meat products and more. While dairy and frozen desserts are dominating the Asian market, the demand for processed meat and seafood are also increasingly becoming one of the major growth drivers for emulsifiers in recent years.

The emulsifier in a meat system is a solubilised (made more soluble) muscle protein. The meat emulsions are made by mixing or chopping meat with water. This emulsifier is capable of binding fat, water and other ingredients (Dikeman & Devine, 2014). A lack of emulsifiers will result in insufficient binding, leading to a soft texture, whereas excessive amounts of emulsifier could result in a hard texture, characterised as tough or rubber-like (Fidel, 2010).

According to Adheeb, et. al, (2014), a mixture of emulsifiers has been selected from the group consisting of polyglycerol fatty acid monoesters, monoacylglycerol ester of dicarboxylic acids, sucrose esters of fatty acids, polyol monoesters of fatty acids and phospholipids to prepare meat analogues. On the other hand, phospholipids can be used to prepare filled meat products containing substantial amounts of both meat and texturised soybean protein (Cheng et al., 2015). Sucrose esters of fatty acids are manufactured from pure sugar and vegetable oils which can be used to improve fat dispersion and stability (EFEMA, 2015).

In poultry products such as nuggets, hydrocolloids are added to coating batter to reduce oil absorption and increase moisture retention during frying. Starch and gums have been used as hydrocolloids in nugget batter formulations to decrease oil uptake in deep-fat fried products in various studies (Amini et al., 2015).

Stabilisers ensure the homogenous distribution and consistency of the emulsion, prevent sedimentation of ingredients in the mixture and ensure the mixture remains even (Kampp, 2012).

Guar gum is the common stabiliser used in meat products. It has strong water holding capacity in both hot and cold water, making the guar gum a great choice as binder and lubricant in the manufacturing of sausages and stuffed meat products. It also performs specific functions including syneresis control, prevention of fat migration during storage, viscosity control of liquid phase during processing, and control of accumulation of the water (Deepak, Sheweta, & Bhupendar, 2014).

Locust bean gum (LBG) is a natural plant-based stabiliser for which the market has growing interest as it exhibits clean label properties. It does not bring an aftertaste to flavour systems (Kuntz, 2009). LBG act as a binder and stabiliser in processed meats, salami, bologna and sausages. It exhibits a lubricating effect on the mix, which facilitates extruding and stuffing operations. It yields a more homogenous product with better texture and decreases weight loss during storage (Featherstone, 2014).

Cellulose gum is a natural polysaccharide found in all plants that has commonly been used as food additive to thicken and stabilise a variety of foods. Cellulose gum can also be added into meat analogue formulations. Grades with high water absorption will retain more moisture, leading to better eating qualities and moisture perception (Imeson, 2011).