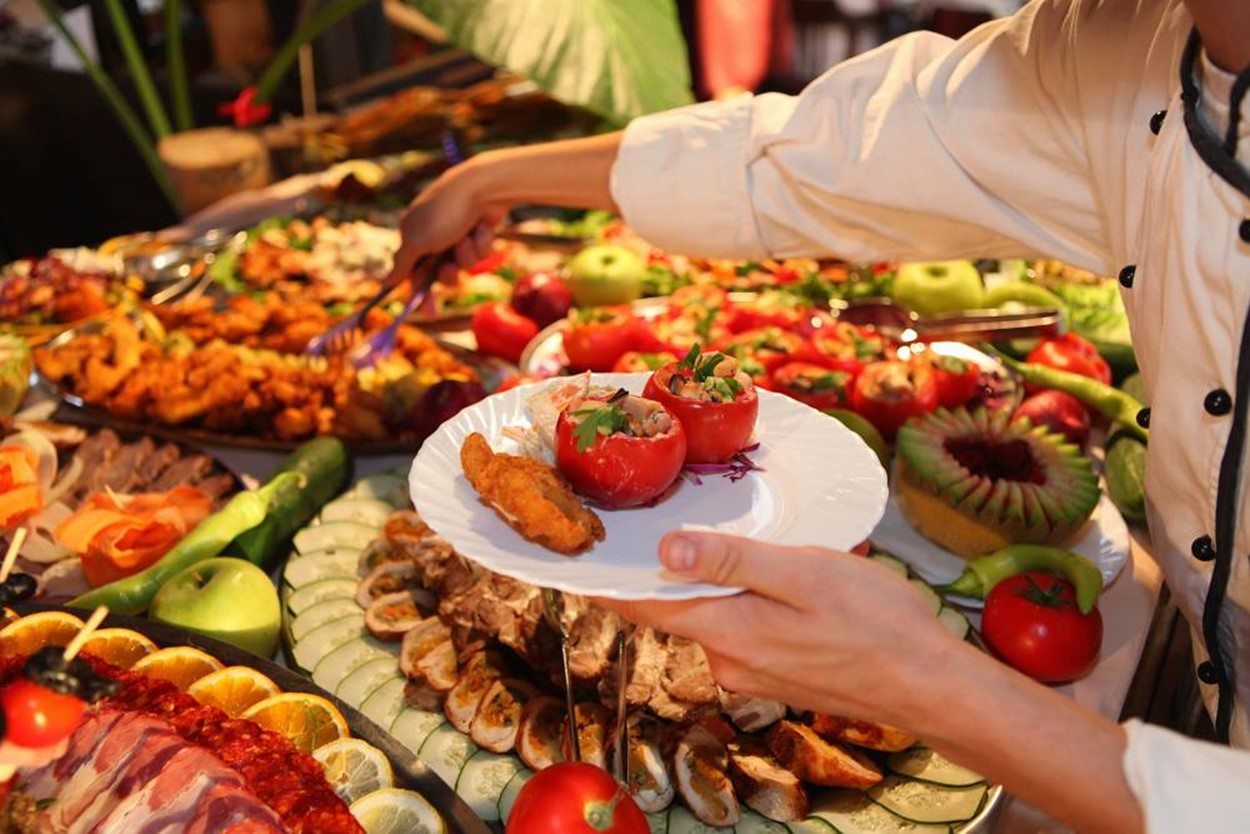 Many go crazy when they partake on an All-You-Can-Eat Buffet. Either they’re really hungry or trying to make their money’s worth. They would often times find themselves overstuffed and sluggish after the two-hour buffet time limit. During our research, we even noticed people consumed more than 5,000 calories in one sitting. So allow the Food Experts at Ricebowl Asia to share some tips and pointers on how you can handle mouth-watering temptations at an All-You-Can-Eat-Buffet.

Eat everything there but just one bite!

Half the fun of a buffet is trying loads of dishes — and you don’t have to give that up. Construct a sampler plate and put tiny portions of several items on the smallest plate you can find. You don’t need to have more than a mouthful of something to know how it taste. Doing this would help you keep those pants button on!

It’s a meal, not a competition.

Never forget that your calories are piling up each time you go back to the buffet line. The trick is to think of your buffet visit as a normal meal instead of a ‘pig-out’ opportunity. Have some lean protein, good amount of complex carbohydrate and some greens that look tempting, or go with the ones that were your favorites on the sampler plate. Then fill your dish with reasonable portions of each.

Let’s be real. The buffet you’re going to isn’t known for having a Michelin Star chicken Parmigiana or molten chocolate lava cake. You’re not spending your money smartly by eating normal tasting dishes with cheap ingredients. We say skip them and increase the value of your meal by choosing premium items like seafood. They seem indulgent, but they aren’t loaded with fat and sugar.

Be a salad extraordinaire.

Often overlooked at the buffet, but one can really have some fun at the salad bar. Customize your soup and get creative for example: have a bowl of broth from whatever non-creamy soup, then load it with veggies from the salad bar and finish it off with a lean protein, like some shrimp or chicken. Expect questions like ‘Oohh, where did you get that from?”

Stay off the vegetables if they look extra glossy, even when they’re labeled “steamed.” Chefs oftentimes toss cooked veggies in oil to keep them looking good while they’re sitting out, but extra oil means extra fat. The food won’t look as good, but if it has a dull finish, pile it on!

Say no to sugar stand-ins.

Only Superman would be able to withstand looking at sinful, creamy, and sweet desserts without indulging them. Since they’re our Kryptonite, we will lose the battle —instead, pick a dessert with built-in portion control, like a small cookie or scoop of ice cream. Just don’t go for the sugar-free sweets.

So the next time you visit an All-You-Can-Eat Buffet, be mindful of what you’re about to put on your plate. You don’t have to take everything in large amounts just because it’s laying in front of you. Pick those premium and high quality foods and walk past the meh dishes. Asia’s Food Experts wish you a smart and healthy buffet!