Durian Making its Mission to Take on Chinese Market 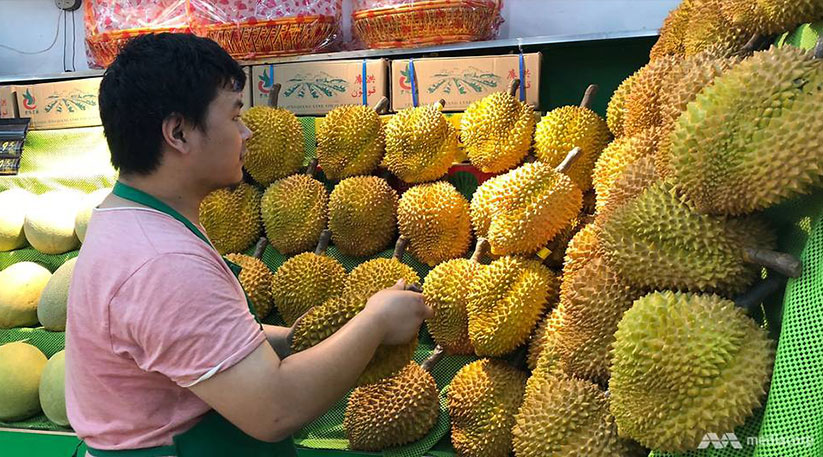 BEIJING: Fragrant to some, repulsive to others. China’s love for durian has skyrocketed in recent years, and the “king of fruit” is now used to flavour products from yoghurt to cheese and coffee.

But while the import market in the country is currently dominated by Thailand, Malaysia also wants a slice of the pie.

He Guofei, 27, who runs a fruit shop in a residential neighbourhood in Beijing, told Channel NewsAsia he is not a big fan of durian – but that this has not stopped him from learning how to pick out a good-quality one based on just its smell.

The sheer volume of durian sales – three cartons every day – means he has no choice but to get up close to the thorny fruit.

“When a good batch of durians arrives, we will send out a message on WeChat telling customers we have new stock and ask if they would like some and we can deliver it to them,” said He.

But it is not just the whole fruit itself that the Chinese want to get their hands on.

There has been an increasing number of shops selling durian-related food items in Beijing in recent years.

Simon Sun, who has a job in IT, opened one such shop in the city’s central business district about a year ago, when he saw the potential of the Chinese market.

Selling novelty items like roasted durian, durian egg tarts and even durian cheese, he said sales have taken off and the shop has become a bit of an Internet hit.

He said he uses mainly durians from Thailand, which make up the bulk of durians that China imports.

Whole fresh durians from Malaysia are locked out of the Chinese market for now because of the risk of pests being transported along with the fruit. Only durians in pulp, frozen or chilled form are allowed.

However, businesses said there are ways to get the frozen whole fruit into the country via other cities.

Malaysian politicians, however, continue to seek official access for their durian exports to China because of soaring demand.

If durian diplomacy prevails, approval for whole-fruit imports from Malaysia could happen within a year.

“If this really happens, I will run faster than a rabbit,” said Sun, who added that he is already making preparations.

The 35-year-old told Channel NewsAsia that while his current shop may be a franchise, he intends to give it up after starting his own company and brand last month.

“Our focus is similarly on durians and its related products, as well as other fruit from Southeast Asia,” said Sun.

“We are looking into partnerships with supermarkets, housing estates and online apps as well.”

Currently, the Malaysian variety could come with a hefty price tag. Sun told Channel NewsAsia that customers have paid up to US$150 for a frozen whole Mao Shan Wang durian weighing about 1.5kg.

By comparison, a Thai durian could cost around US$45.

“Durian has a unique taste and it’s very rich. After eating it, you kind of crave it,” said Chinese national Yang Yang, who added that she is willing to pay to feed her durian indulgence.

“I have durian about once a week. I would often buy a large durian and can finish it in two days,” added 25-year-old Roxanne Zhou.

The spike in popularity of durians could partly be due to more Chinese nationals travelling to Southeast Asia, according to Tan Heng Hong, APAC food and drink analyst at market research firm Mintel.

However he noted that besides the durian, other distinctively Southeast Asian products could potentially also end up making huge waves in the world’s second-largest economy.

“When you visit a country, you probably will have developed a taste for the local food, so when you go home you start to yearn for snacks and drinks that you have tasted abroad,” said Tan.

“We see that a lot of businesses are catering to this market at the moment.”

He stressed, however, there are still vast challenges.

For example, onerous Chinese regulations and the language barrier are all obstacles that businesses need to overcome, before Southeast Asian products can become king in China.